A large central hallway separates the car tag and property tax departments, with staff members cross-training so they can help one another during busy seasons. 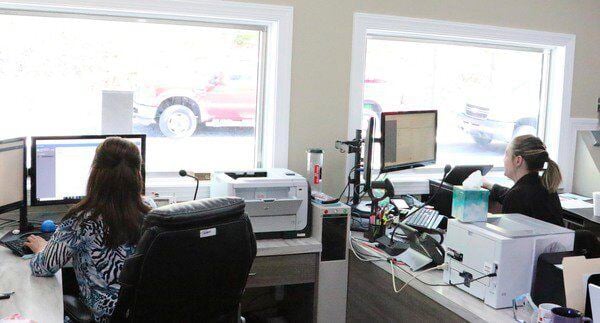 Whitfield County officials say residents will appreciate the convenience of two drive-thru windows that will allow for easy payment of property taxes and car tag renewals.

A large central hallway separates the car tag and property tax departments, with staff members cross-training so they can help one another during busy seasons.

Whitfield County officials say residents will appreciate the convenience of two drive-thru windows that will allow for easy payment of property taxes and car tag renewals.

No one likes to pay taxes, says Whitfield County Tax Commissioner Danny Sane, but his office’s goal is at least to try and make it as convenient as possible for citizens to do so.

Monday morning, Sane was like a proud father, pointing out some of the improved features that will better serve residents for years to come as he walked through the newly renovated 5,500-square-foot facility at 1013 Riverburch Parkway, just off the north bypass about a mile from Cleveland Highway.

While his office has already been serving the public for a few days at the new site with a “soft” opening, Monday marked the official opening.

Among the highlights is the presence of two covered drive-thru lanes behind the building, something that has been on Sane’s radar ever since he took office in 1993 and will make it easier in particular for young moms with children in the back seat and elderly residents who aren’t as mobile as they once were.

“The purpose for this is specifically for one reason, and that is to keep people out of the line,” Sane said. “If you just need to make a property tax payment or pick up a car decal, the staff can process it and send it right back to you and you don’t even have to get out of your car.”

Staff members in the property tax and car tag departments, located across from one another in the center of the building, will be cross-trained so they can help one another during peak seasons, Sane said.

Whereas the old office required residents to compete for parking spaces with people coming to other departments at the courthouse, the new location features dedicated parking, strictly for visitors to the tax commissioner’s office.

Another way to cut time waiting on the phone is through the use of several cameras that allow the receptionist to see exactly who’s available to help a customer and then quickly transfer the call.

The facility also includes a large meeting room, where staff members will be able to gather as a group and watch mandatory state training on a screen. That way, the county saves having to pay their travel expenses, and the staff doesn’t have to spend any nights away from their families.

County commissioners approved the purchase of the facility for $620,000 last August as part of their goal of moving non-judicial offices out of the courthouse. Renovations are underway on the tax commissioner’s old space in the courthouse, which is slated to be used for the Public Defender’s Office and other court-related functions.

Sane praised his office staff for their assistance in making the move go smoothly, as well as other county departments like Rick Lovelady and his Information Technology staff, County Engineer Kent Benson and Chuck Fetzer and his Buildings & Grounds crew.