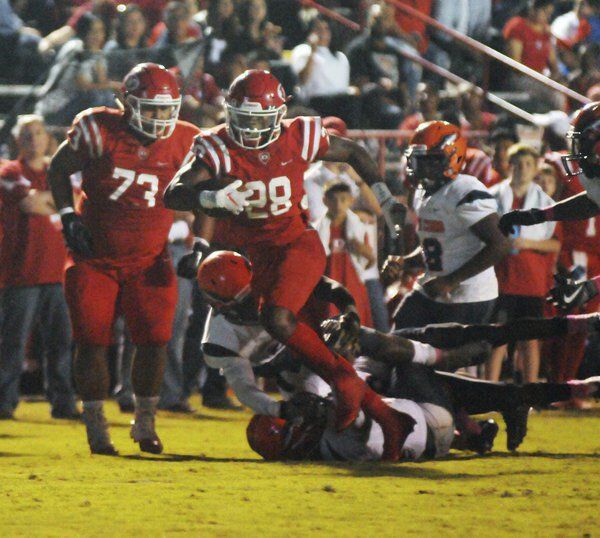 Dalton High School's Maurice Howard breaks free for a touchdown during a 2019 game. Howard will be asked to help fill the hole left by graduated All-American running back Jahmyr Gibbs, who now plays for Georgia Tech. 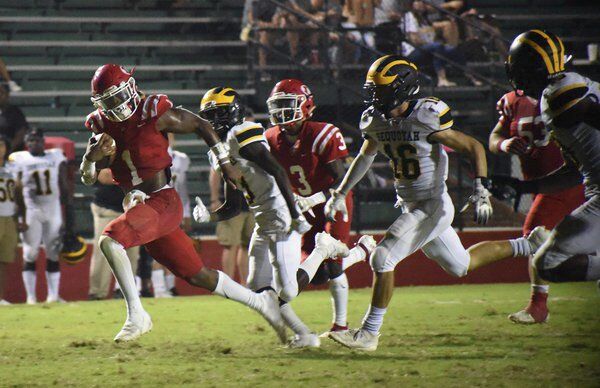 Dalton High School All-American running back Jahmyr Gibbs breaks away for a long touchdown during a 2019 game.

Dalton High School's Maurice Howard breaks free for a touchdown during a 2019 game. Howard will be asked to help fill the hole left by graduated All-American running back Jahmyr Gibbs, who now plays for Georgia Tech.

Dalton High School All-American running back Jahmyr Gibbs breaks away for a long touchdown during a 2019 game.

If there was any doubt which Dalton High School football player will look to play a lead role in the backfield after the departure of 2019 All-American running back Jahmyr Gibbs, just follow the number.

Ahmaad Tanner, who now plays for Austin Peay University, donned it during his time in the backfield for the Catamounts. Gibbs, who will suit up for Georgia Tech in 2020 after his storied career ended at Dalton after last season, wore it.

In 2020, it’s senior Maurice Howard who will wear the number 1 red and white Dalton Catamount jersey.

“I don’t really consider it a big role, because I know what I have to do to get points on the board,” Howard said. “I know both of those guys, and we’re all friends, so I thought, ‘Why not carry on that tradition of being number 1?'”

Now a senior, Howard is coming off a season in 2019 where he mostly served in spot duty while Gibbs weaved his way towards 2,554 yards and 40 touchdowns.

“We were great as a team, but he was kind of the face of that team,” Howard said.

“The case could be made that he’s arguably one of the greatest to play at Dalton High School. I certainly think he’s in that conversation,” Dalton head coach Matt Land said of Gibbs. “It’s hard to replace a kid of that magnitude, not only was he 63% of our offense last year, but he was a large part of our emotion as well.”

Land won’t expect Howard to make up for all of those gaudy numbers himself in 2020. Land envisions a committee approach to making up for the departed offense.

“You have to replace him. I use the analogy that one times 50 is equal to five times 10. We have to find those five or six guys,” Land said. “We’re not going to ask any one person to bear that burden.”

Although Howard won’t be alone on the Catamount offense, Land is confident he can step in and be productive in that spot that has been so productive for Dalton recently.

“He’s going to wear that number 1, and he has been a very stable running back for us for the last two years, getting the majority of those reps that didn’t go to Jahmyr,” Land said. “Now, it’s his turn.”

After all, it’s not only Gibbs the Catamounts will be without in 2020. Dalton returns just five starters from last season and only one on the offense.

Ashton Blackwell, a junior, is the team's starting quarterback, while receivers Journey Boston and Karim Page will be expected to step up to give Blackwell targets.

With a new-look team, Dalton enters a new-look region. The Catamounts step into Region 5-6A, which includes no overlap from their region from the previous two seasons. They’ll face off against seven new teams in region play, including Carrollton, which finished 12-1 and reached the quarterfinals of the Class 5A playoffs in 2019.

Navigating a new back, new team and new region, Land said the team is ready to begin the new season.

“We’ve been in here and practicing hard,” Land said. “We’re ready to go.”

Circled on the schedule

• Dalton’s opening game is intriguing with a Calhoun team that has been a power in Class 3A, but bumps up to Class 5A for the 2020 season due to classification realignment.

• The Catamounts’ first Region 5-6A game comes after a bye week. Carrollton finished 12-1 last season and reached the quarterfinals of the Class 5A playoffs.

• A week after its matchup with Carrollton, Dalton travels to play South Paulding, another new Region 5-6A foe and a Class 6A playoff team last season.