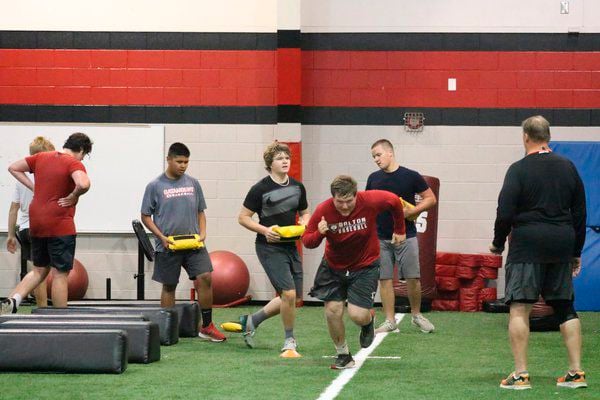 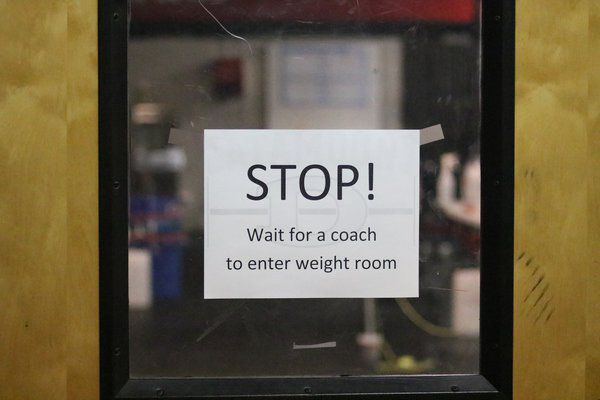 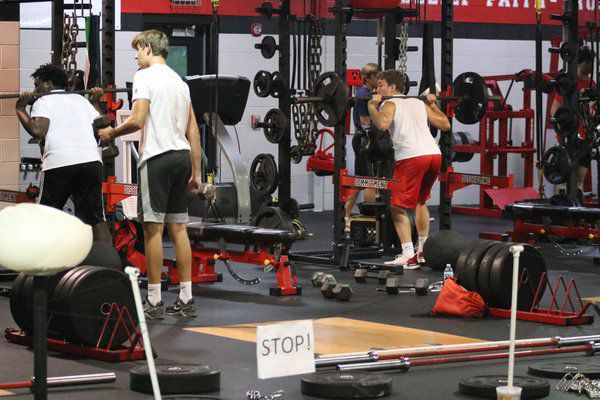 Portions of Dalton High School's weight room are roped off during football workouts. 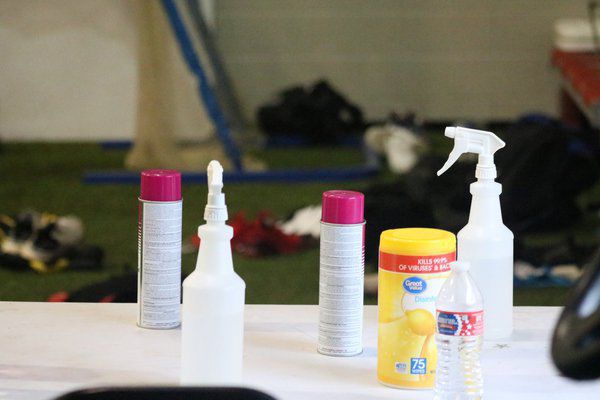 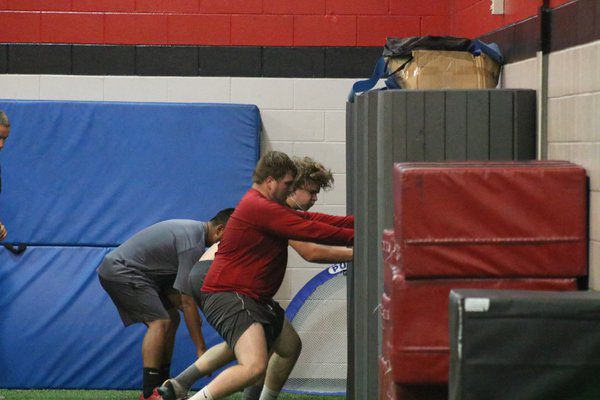 Portions of Dalton High School's weight room are roped off during football workouts.

Before this week, Dalton High School was not allowed to use footballs in offseason workouts.

So, they got creative.

"We had our running backs with rolls of paper towels in their arms, trying to teach them about ball security," Dalton head football coach Matt Land said.

Amid the outbreak of the new coronavirus (COVID-19), and the shuttering of schools in March, high school sports teams had not been able to work out together as a team until June 8. The Georgia High School Association allowed a return to workouts with restrictions in place, requiring social distancing, small groups and sanitation while disallowing the use of sport-specific equipment, including footballs.

Starting this past Monday, the GHSA rules relaxed, and those backs were able to exchange the paper towel rolls for the familiar feel of the pigskin.

"It's football, and you need to have the ball," Land said. "There's only so much you can do mentally and physically without the connective tissue, and that's that ball. These guys have been starved of that. The first day we got out there with the ball, it was like Christmas."

The Catamounts took advantage of that holiday feeling at a workout session Tuesday morning. As the rain pounded on the roof above them, the team retreated to the school's indoor facility.

One group is in the small, indoor turf field. Quarterbacks field snaps and fire quick, short passes -- the only kind allowed in the small facility -- to groups of receivers.

Another group, through a door that is only allowed to be opened by a player with a coach escort, lifts in a large weight room that normally can house 90. Another group is in a classroom, going through the mental side of the game while waiting for their turn at the other two stations.

GHSA rules originally limited workout sessions to just 20 people at the June 8 start of workouts, but increased that number to 50 with the reintroduction of footballs.

Land and the Catamounts, however, found a silver-lining among the strict regulations.

"One of the things we found pleasantly about it, is we really liked the small groups," Land said. "We really enjoyed the breakouts of only having 20-25 at a time. It felt more intimate and more organized and personal, so we stayed with that."

The Catamounts have held 12 football workouts in the three weeks of workouts allowed by the GHSA. Next week is the annual statewide "dead period," where no team activities are permitted once again.

After such a long period of inactivity prior to workouts resuming, the dead week is still welcomed, Land said.

"We need a little bit of a break at this point physically, we've pushed the guys pretty hard in getting back," Land said.

Land and his coaching staff spent the almost three months between the closure of schools and restart of workouts making and rethinking potential plans for what the return would look like. Many coaches have dedicated responsibilities during workouts to help keep things safe. One coach sweeps through the weight room with a sanitizing sprayer after a group lifts, while another spritzes hand sanitizer for each player as they move between stations.

"We're designing an airplane as we fly it," Land said. "There's no manual on this, we're just coming up with it as we go."