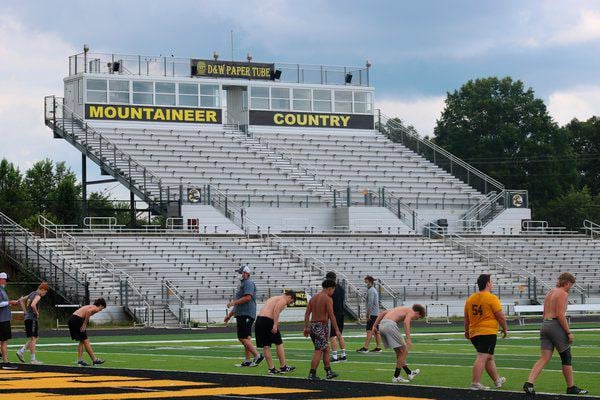 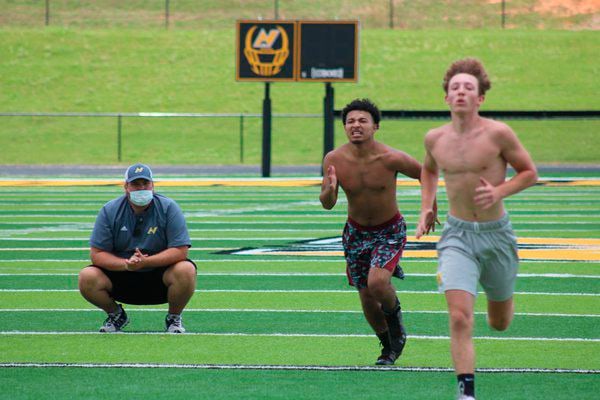 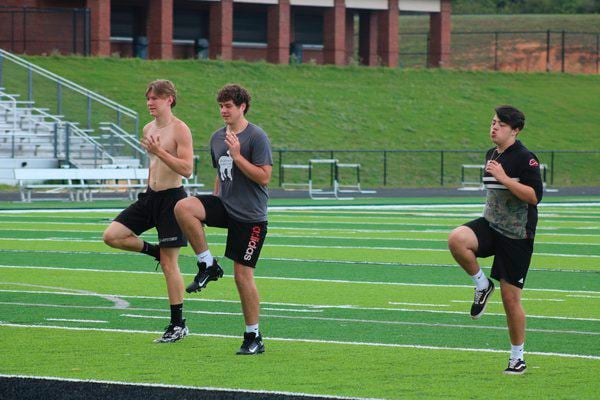 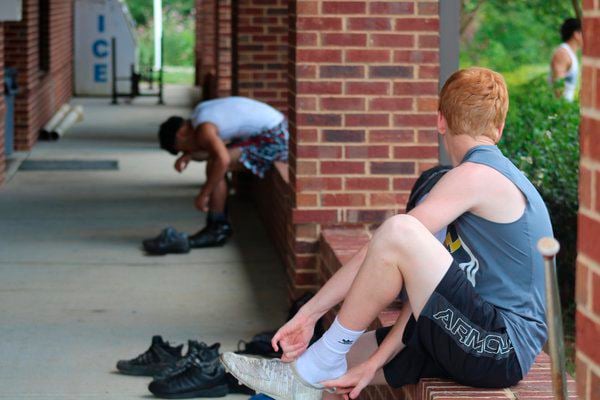 North Murray High School football players gear up prior to a Thursday workout.

North Murray High School football players gear up prior to a Thursday workout.

CHATSWORTH -- Thursday's football workouts at North Murray High School looked a little bit different than the next ones will.

A group of less than 25 Mountaineers stretched, sprinted and suspired under an overcast sky late Thursday morning, completing a workout in which they weren't allowed access to the namesake of their sport. It was final workout before a three-day weekend that gives way to four more days of workouts next week.

After two weeks of heavily-restricted workouts due to the outbreak of the new coronavirus (COVID-19), which the Georgia High School Association began allowing for its member schools starting June 8, the Mountaineers and teams around the state can finally pick up a football again.

The GHSA released a memo Wednesday night announcing the changes to Georgia schools. Beginning Monday, teams can work out in groups of up to 50, and access sport-specific equipment, like a football. Workouts were originally limited to groups of 20, including coaches, but that requirement was bumped to 25 this week.

"If I can get 50 here at a time, we can do conditioning, we can do the weights and then we can do the football stuff," North Murray head football coach Preston Poag said. "That gets us back more toward the routine of how we've done it over the years."

Poag informed one group of those changes Thursday as they stood in the endzone, hands-behind-head as they rested from a running drill. The previously-divided groups of 25 are set to stick together and join another, limiting the amount of cross-contact between students.

Those other safety restrictions passed down by the GHSA are still firmly in place. Poag and the North Murray coaching staff take the temperature of each Mountaineer prior to a workout and asks a series of questions about contact and travel history. Players still must maintain 6 feet of distance between each other and sanitize weight-lifting equipment between uses.

"These workouts have been a little bit different with all the taking of temperatures and asking about sickness in the family," Poag said.

Thursday's workout found the Mountaineers in a state of getting back into shape.

After an almost three-month layoff of organized team conditioning, even with sent-home workouts, North Murray and several area schools are ramping up to an increased level of activity.

"It's worked out well these first couple of weeks doing conditioning just to get them back in here and teach the freshmen what to do," Poag said. "Usually you have them at the end of the school year and teach them some stuff."

After one running drill Thursday, in which the players ran from the goal line to the 25 and back six times, the Mountaineers got a five-minute break before repeating the same drill.

That five minutes was filled with tough love, encouragement and motivation from the coaches. At the end of the next drill, the players have shaved a few good seconds off.

"I love this team's work ethic and attitude," Poag said. "With that layoff, you expect them to be a little out of shape, but I love that they come out here everyday with a good attitude, and that goes a long way."