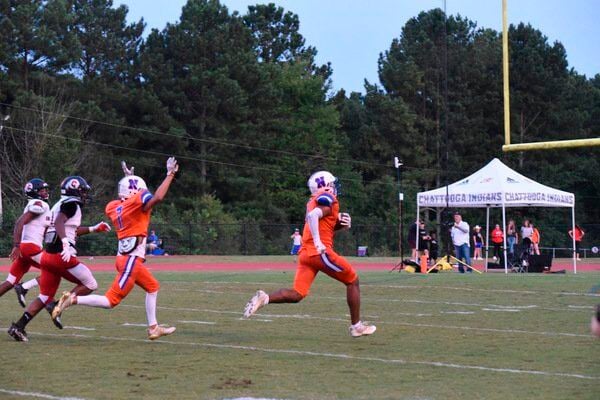 Northwest Whitfield High School receiver Ray Morrison races to the end zone for a touchdown on a screen pass for the Bruins' first score of the night. 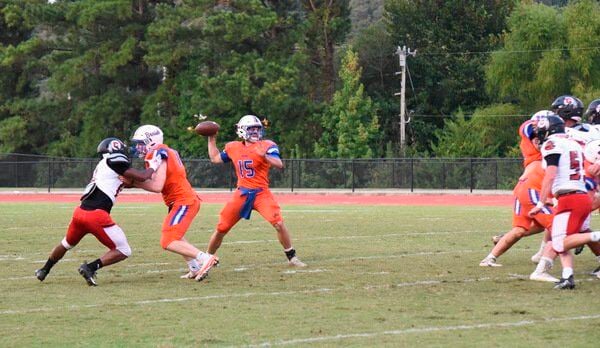 Northwest Whitfield High School receiver Ray Morrison races to the end zone for a touchdown on a screen pass for the Bruins' first score of the night.

"Our offensive line blocked well enough for us to run it in the second half — (running backs) Adrian Reyes and Cameron Collins were awesome — and we controlled the line of scrimmage," said Josh Robinson, Northwest's head coach. "Our defense was spectacular tonight," led by leading tackler Jax Brooker, who was "phenomenal."

The Bruins, who handled the Indians last season 38-14, struck first Friday, when Ray Morrison caught an inside screen pass from quarterback Owen Brooker, broke a couple of tackles, and dashed 50 yards to the end zone — assisted by several quality downfield blocks — with 3:50 left in the opening quarter to cap a 62-yard touchdown drive. Northwest extended the margin with 3:16 remaining in the first half on Brooker's 14-yard touchdown pass to Hudson Gray, although Grant Holder's extra point attempt was partially blocked.

The Indians, which cancelled games the past two weeks due to COVID-19, utilized a bit of chicanery to get on the board with a halfback option play with Jaylon Johnson's 36-yard touchdown reception — then extra point by Caroline Hodges — cutting the margin to 13-7 with 60 seconds remaining in the opening half.

The teams exchanged fumbles on back-to-back plays around midfield on their first possessions of the second half, but Reyes' 7-yard touchdown run at the end of the third quarter finally provided some breathing room for the Bruins, along with a Brooker to Brayden Morrison connection for the two-point conversion.

Chattooga reached Northwest's 31yard line early in the fourth quarter, but Jax Brooker blew up a fourth-down conversion attempt, throwing running back Lashaun Lester to the ground for a loss. His cousin, quarterback Owen Brooker, subsequently darted 42 yards for a touchdown with 9:38 remaining for the final margin.

A few plays into the game, Jax Brooker sustained a knee injury, with a "hematoma that swelled up six inches, the biggest I've ever seen," Robinson said. "But, he just kept going and going."

"It didn't hurt that bad, just a little when I walked, but I couldn't let my teammates down," Brooker said. "I just gave it everything I had."

Northwest's two losses this year came in triple overtime, to Coahulla Creek High School, and by one point to North Murray High School. While "we strung together a bunch of mistakes again tonight, we found a way to overcome them," Robinson said. "This was a huge step for us tonight, and it'll give us confidence in the next close game."

The Bruins (2-2) is idle the next two Fridays, returning to their home field once again Oct. 1 to open Region 7-4A play against Carrollton's Central High School. Chattooga (0-2) is slated to visit Newnan to take on The Heritage School Friday.

Over the next two weeks, "we're going to work on getting rid of the repetitive mistakes," Robinson said. "We don't make those consistent mistakes in practice, but that's the sign of a young team, (as) we have a lot of new starters on both sides of the ball."