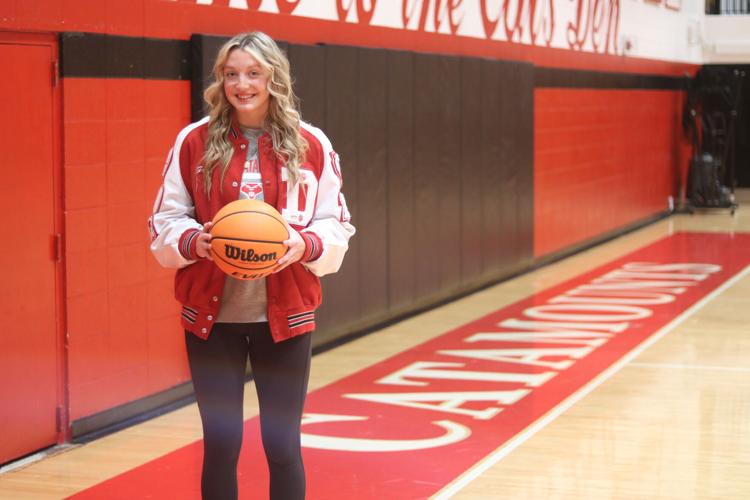 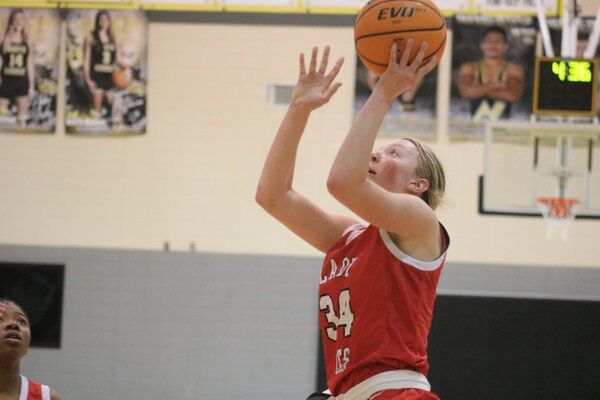 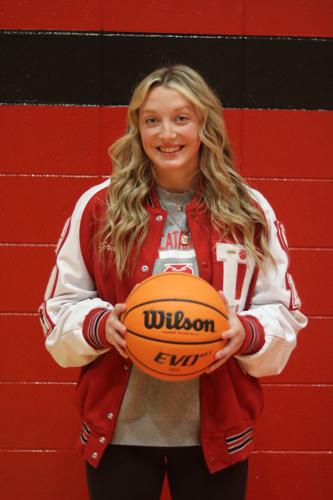 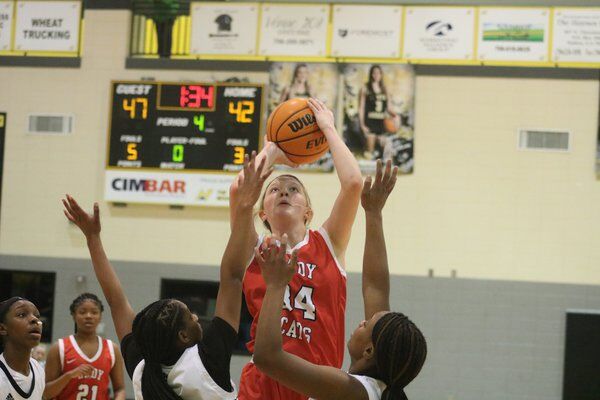 Dalton High School’s Gracie Ridley fires a shot against Calhoun in a 2021 game.

Gracie Ridley thinks she had a pretty good season — for a freshman — in 2020-21 for the Dalton High School girls basketball team.

In her sophomore season, Ridley — and the Lady Catamounts — really began to shine.

“I think I kept my composure a lot better,” Ridley said. “Coming from middle school to high school is a lot different. I definitely played like a freshman. You just kind of have to get through it.”

Ridley averaged double-digits in both points and rebounds in her freshman year for a Dalton team that finished 9-15 and well short of the playoffs.

“My difference in this year and last year is I was able to think more like a high school player,” Ridley said. “(Dalton head) Coach (Hannah Harris) just pulled me aside and said, ‘You’re still a sophomore, but you need to think more like a junior or senior to help this team.’”

Ridley dominated opposing defenses with her scoring and offensive rebounding, then shut down so many opposing possessions with a block or a defensive rebound.

Despite being the focus of opposing defenses, Ridley averaged 16.8 points a game and 13.7 rebounds per contest.

Ridley’s season was good enough to earn her the Player of the Year award in a Region 5-6A with lots of top talent and an all-state selection by the Georgia Athletic Coaches Association.

It also nets her more recognition. Ridley has been named the 2022 Dalton Daily Citizen Girls All-Area Basketball Player of the Year.

Ridley came into the season with a little reluctance for the starring role she’d need to take to lead the Lady Cats to the success they had this season.

“Coach Harris always told me I was going to have to be in a leadership role. As a sophomore on a team with eight seniors, I was like ‘That’s not my job this year,’” Ridley said. “But I think we all kind of stepped up to lead the team.”

The Lady Cats began the year a bit rocky, starting 2-2 with two lopsided losses to Calhoun and Rome, but Dalton soon began to round into form.

A month after the season-opening loss at Calhoun, Ridley and the Lady Cats got another shot at the Yellow Jackets at the Christmas Tournament at North Murray High School.

“We beat them, and everyone was really excited. We had played them at the beginning of the year and got destroyed. We were just really happy to see how far we’d come,” Ridley said. “Then we beat Carrollton and we were the happiest team ever. We’d been in the gym putting in the work, and it was starting to show.”

That win over Carrollton came a few weeks later. It was a win over the eventual Region 5-6A champion and 2021’s state runner-up.

Those wins were part of the best section of Dalton’s schedule. That 2-2 start was immediately followed by 13 straight victories.

“We’re in a really difficult region, with Carrollton and Rome, and we did very, very well for a lot of the teams we had to play,” Ridley said.

During that stretch, Ridley packed the stat sheet. She grabbed 26 rebounds in a win over Coahulla Creek. In another win over Calhoun, Ridley had 31 points and 19 rebounds.

“I’m the tallest on the team, so it was just kind of on me to go get rebounds,” said Ridley, who is 6 feet tall.

Although Ridley terrorized defenses, often setting up at the post or elbow before driving for layups or short jumpers, she also focused on other aspects of her game.

“I was always on myself about my offense, but I felt like I developed my defense a lot this year,” Ridley said. “Just to help get stops and get the ball back.”

Ridley and the Lady Cats rolled to a 20-5 record entering the Region 5-6A tournament.

Dalton downed South Paulding 59-23 in the first round to grab a playoff berth. The Lady Cats ran into Carrollton again in the region semis. The Lady Trojans this time downed Dalton 63-37, and a loss to East Paulding in the third-place game sent a Dalton team that had once led the region standings down to fourth for the playoffs.

The Cats had to travel to Woodstock to play River Ridge for that first playoff appearance in three years. River Ridge had just one loss all season, and Dalton wasn’t able to give them a second that day.

Ridley and a young group of Lady Catamounts got a taste of the playoffs, though, and she said they are looking forward to getting another shot.

“I’ve been playing with a lot of these girls for a while, and we’ve been waiting for our junior and senior years,” Ridley said. “I’m super excited to see what we can do.”