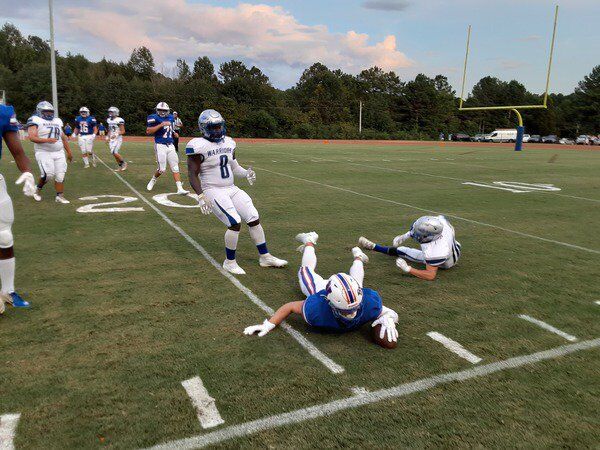 Northwest Whitfield High School senior Matthew Redmond pounces on a ball in the first quarter of Friday's 34-13 home victory over Gordon Central. Redmond had a pair of touchdown receptions in the game. 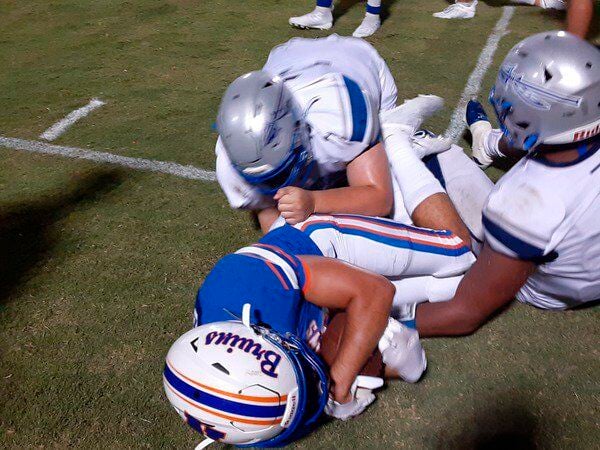 Chase Gentry, a running back for Northwest Whitfield High School, is ridden down by a pair of Gordon Central defenders during the second half of the Bruins 34-13 home victory Friday.

Northwest Whitfield High School senior Matthew Redmond pounces on a ball in the first quarter of Friday's 34-13 home victory over Gordon Central. Redmond had a pair of touchdown receptions in the game.

Chase Gentry, a running back for Northwest Whitfield High School, is ridden down by a pair of Gordon Central defenders during the second half of the Bruins 34-13 home victory Friday.

Brooker called his historic night a "team" accomplishment, noting an adept rushing attack helped open up the passing game, his offensive line "protected" him and his wide receivers tallied a plethora of yards after catch.

"I know all I have to do is get it out to them, and they can make a play," Brooker said of his gamebreaking wideouts. "That takes a lot of stress off of me."

The likes of Brayden Morrison, Ray Morrison, Preston Nealey and Matthew Redmond are "scary for defensive coordinators," said Northwest coach Josh Robinson, whose team moved to 2-0. "They're troublesome (for defenses), because they are so good in space."

"Owen was on target tonight," Robinson said. "He had one ball tipped (for an interception), and he threw one bad ball (for a second pick), but that may have been the only bad ball he threw all night."

A three-and-out drive followed by a lousy punt set the Bruins up at Gordon Central's 36-yard line halfway through the opening quarter, and Northwest capped the drive with Brooker hitting Redmond on a quick slant for a 3-yard touchdown. The Warriors responded, however, early in the second quarter, as Jordan Boone carried or ran over half of the Bruins defense on his way to a 10-yard touchdown, tying the game with 11:15 remaining until halftime.

The home side wasted no time in reclaiming the lead, though, as on the first play of the ensuing drive, Morrison turned on the afterburners to leave the Warriors defenders in his wake on a 64-yard touchdown reception. Northwest's next drive ended when Skyler Hill intercepted Brooker's pass on his team's 6-yard line, but the home team's defense responded, refusing to yield even one first down, and the Bruins took over on Gordon Central's 40.

Redmond's 19-yard touchdown and the ensuing extra point doubled the margin to 14 with 3:39 until the break, and then Gordon Central's quarterback Tre Williams left the game with an injury with 1:43 remaining. Sean Gray took over, and Williams never returned.

Gray "is good, too, but Williams is just so big," Robinson said. "He might be the biggest guy on our team if he played for us."

Boone was also a load, and Robinson was pleased with the way his defensive line "hung in there well against a bigger offensive line," too.

"We do need to tackle better," as both of Gordon Central's scoring drives were tied to missed tackles, but "penalties were much better (than week one), and we were pretty disciplined for the most part," Robinson said. "We improved" from the season opening 27-6 win at Coahulla Creek, "but we're not there, yet."

Redmond kicked off the second half for the home team by taking a quick screen pass 33 yards down to the Gordon Central 32. Later in the drive, on third down from the 2, Brooker scrambled out of the pocket, bought time and found Nealey in the back of the end zone for a touchdown to build a three-score lead.

"We tried for a quick out, but it wasn't there, so I escaped, and I kept my eyes down field,'' Brooker said. "Preston is a senior, and so solid, so I knew he would break open, and he did."

Nealey "came back tonight after a couple of drops last week," Robinson said. "He was tremendous tonight."

Boone's second touchdown of the game, this one from the 2, brought the Warriors within 15 with 2:14 remaining in the third, but the extra point attempt was blocked, and the teams went to the fourth quarter with the home side ahead 28-13. Boone fumbled with 4:33 remaining in the game, however, and Dawson Wheeler pounced on the ball at the 38 of Gordon Central, all but sealing the fate of the road side, which dropped their season opener last week to Woodland.

Brooker's final touchdown toss came on a third down from the 10 with 77 seconds left, as Brayden Morrison's catch moved the margin to 21, where it stayed as Yahir Zapata's extra point attempt was blocked.

"We still need to find our identity at times on offense, (because) we get hot, and then sputter out," Brooker said. "I threw two interceptions tonight, which obviously sucked, and we all need to be more consistent."

The Bruins visit North Murray High School next Friday for the latter's season opener. The two schools from neighboring counties have never played before.