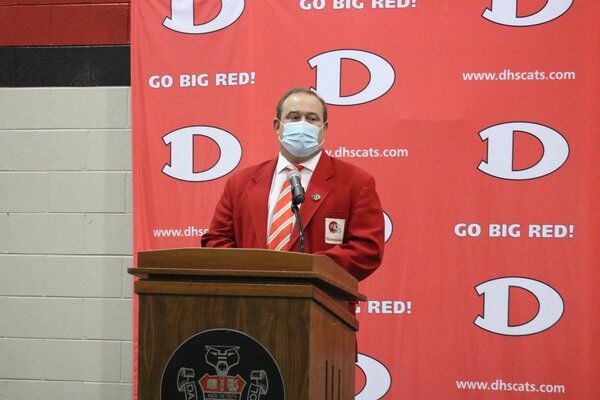 Kit Carpenter, a Dalton High School graduate and longtime football assistant, has been named the school's new head football coach. He was introduced at a press conference at the school's Ronnie McClurg Athletic Center Tuesday afternoon. 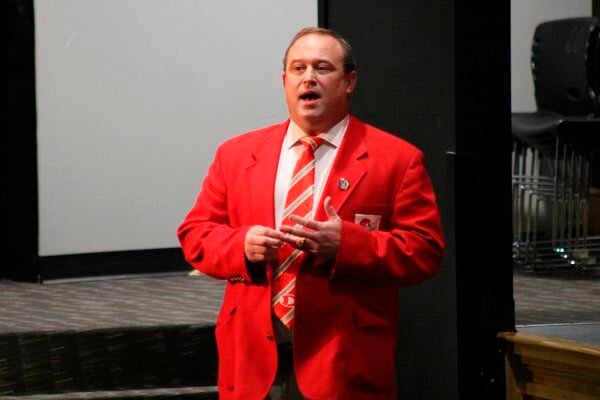 Kit Carpenter, a Dalton High School graduate and longtime football assistant, has been named the school's new head football coach. He was introduced at a press conference at the school's Ronnie McClurg Athletic Center Tuesday afternoon.

After a two-month coaching search, Dalton High School didn't end up having to look far for its new head football coach.

They found him right down the hall.

On Tuesday, Kit Carpenter, a 1993 Dalton High graduate and the Catamounts' defensive coordinator since 2009, was named the program's next head coach.

"Playing here and coaching here over the last 20 years, it's really special to me, and it's really exciting," Carpenter said. "Even as a little kid, going to playoff games, and it's cold outside, it's always something you dream about as a kid, but to really get the opportunity to do it is really awesome."

Carpenter takes over for his former boss Matt Land, who resigned in December 2020 after 11 years as the head coach. Land, who like Carpenter was a Dalton graduate, led the Catamounts to three region championships and eight playoff appearances with an 80-43 record. The 2016 Catamounts finished 13-1 and reached the semifinals of the Class 6A playoffs.

Carpenter takes the job after the Catamounts finished with a 2-7 record in 2020, the fewest wins for the program since the 1940s.

"I've been here for 20 years. It's no surprise what to expect in 6A. As a coach, it's something that we thrive on," Carpenter said of the challenge. "We just have to continue to work. We have a great group of kids. We'll get what we need to get done in the weight room, and bouncing back shouldn't be a problem."

Carpenter played linebacker at Dalton under head coach Bill Chappell until Carpenter's graduation in 1993, when he was named Class 3A defensive player of the year. Carpenter then earned a scholarship to North Carolina State University where he played for four years.

Carpenter joined the Dalton High School coaching staff in 2001 and was named defensive coordinator in 2009. He's worked at various jobs with Dalton Public Schools since 2001, teaching math at Dalton Middle School and at Dalton High before moving into his most recent role as director of the Dalton Alternative Education Program. Carpenter, who has a doctorate in eLearning, said he would continue to teach along with his position as head coach, but his classroom role hasn't yet been decided.

Carpenter is the fifth head coach for the Catamounts since Chappell retired after the 1996 season. Chappell coached for more than 30 years at the school, winning Dalton's lone state championship in 1967.

Carpenter was hired after an extensive search that had been ongoing since Land announced his resignation. After two months, the search landed close to home.

"It was really a great process, and they really did everything that they could do to find the right guy to push our program where we want it to go," Carpenter said. "Fortunately, it turned out to be me."

"Thanks to the committee for the work that they did," Dalton Public Schools Board of Education Chair Matt Evans said as the board convened in a special called meeting Tuesday to approve the hire. "It took a lot of time and a lot of work for all of our community members."

After the unanimous board vote, an assembled crowd of players, students, faculty rose to meet Carpenter with applause and a standing ovation.

Evans said Carpenter was hired for his work with student athletes on and off the field.

"He knows what it is to be a Catamount. His commitment to win is fierce and passionate," Evans said. "His belief in his students and players is what sets him apart. His impact on them lasts long after they leave the athletic field or the classroom."

Though Carpenter doesn't have any head coaching experience, school officials tout his experience with Dalton players over two decades as a major part of why he got the job.

"Not only does he have an impressive knowledge of the game, but he also builds great relationships with his players," said Stephanie Hungerpiller, Dalton High School's principal. "He challenges his players and fellow coaches to be the best that they can be and leads by true example. I have no doubt that he is the best man for the job and look forward to seeing the great things he will do as our head football coach."

"It will be similar to what it has always been," Carpenter said of his coaching philosophy. "Discipline, heart, dedication, sacrifice and love for each other. That's really our core values, and that's something that all of our decisions will be made on."

"We've been without a head coach now for a couple of months," Carpenter said. "We'll just start to tighten up some things that have gotten away from us the last couple of months.

"I believe the future is bright, and today I couldn't be more proud to be a Catamount," Carpenter said.