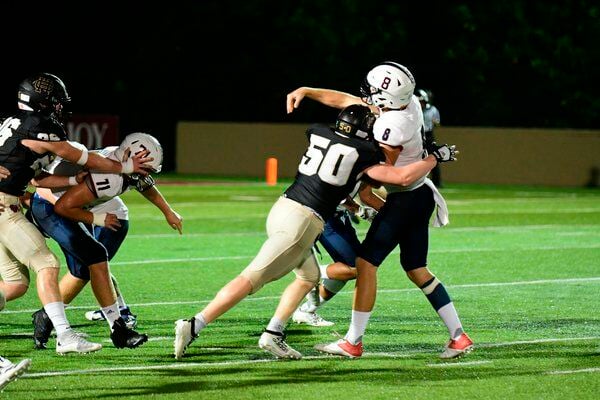 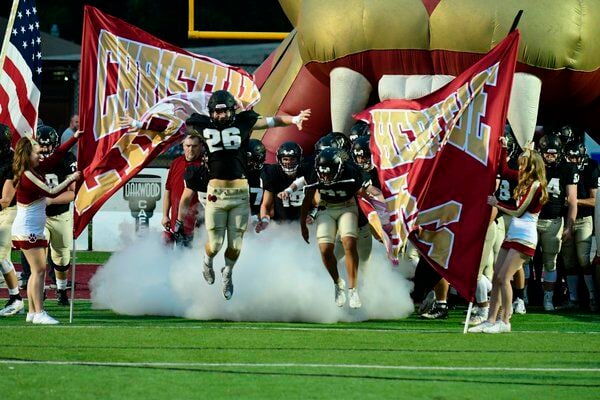 Christian Heritage School players burst onto the field prior to their 39-7 victory over Heritage on Friday. 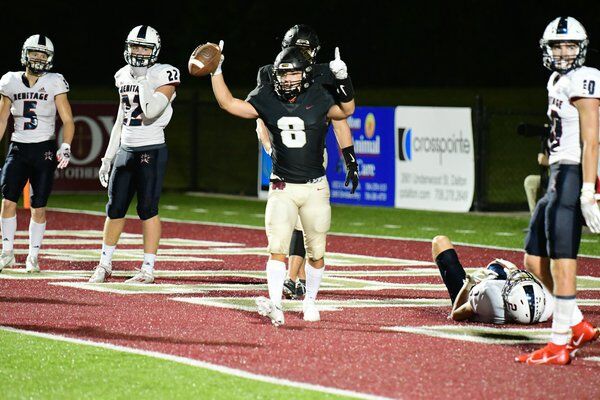 Christian Heritage School's Tucker Jordan celebrates a score during the Lions' 39-7 victory over Heritage on Friday. 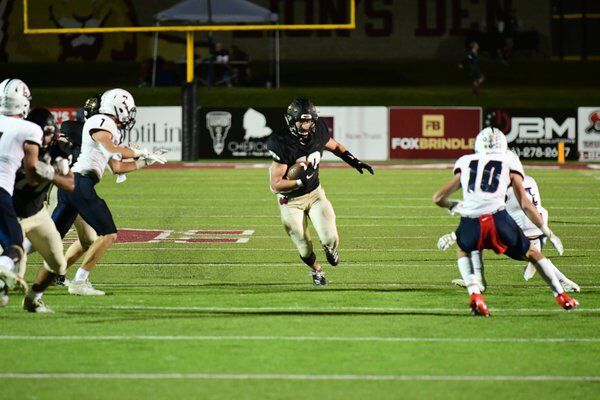 Christian Heritage School players burst onto the field prior to their 39-7 victory over Heritage on Friday.

Christian Heritage School's Tucker Jordan celebrates a score during the Lions' 39-7 victory over Heritage on Friday.

Though Heritage High School brought an undefeated record into Friday's game at Christian Heritage School, it was the home team that looked as if it ought to be sporting the gaudy record, as the Lions roared, rampaged and routed the Generals, 39-7.

The Lions (3-1) scored three touchdowns in a span of less than four minutes early in the second quarter to build a 21-0 lead, and the defense didn't give up a score until there was 1.2 seconds remaining in the game. They picked Heritage quarterback Nick Hanson three times and scored a special teams touchdown, while Lions quarterback Christian Thomas accounted for three touchdowns.

The victory was all the more impressive considering the Lions were missing running backs Gage Leonard and Solomon Locke, who had combined for 10 rushing touchdowns in the first three games, as well as reliable kicker Jonah Paniagua, due to the new coronavirus (COVID-19) quarantine. Locke, in fact, had shattered the school record last week with 204 rushing yards.

"We know we're going to lose kids this year (because of COVID-19) — everyone is — (so) it's next man up, and we've got a lot of good players," said Jay Poag, head coach of the Lions. "Tucker Jordan stepped up with two interceptions and two touchdown (receptions), and how about our kicker? (Freshman) Carson Russell got thrown into this (environment), and he kicked really well."

And Evan Lester, who filled in at running back — moving into the backfield from his usual wide receiver position — was "the best player on the field," Poag said. "He's a horse, and we like to say 'Feed the horse.'"

"I grew up running the ball, and I feel like if you put it in my hands, I can make plays," said Lester, who learned he'd be playing running back on Tuesday. "I was ready for it, and it was effective tonight."

"I did get a lot more tired tonight" as a running back than in a typical game at wide receiver, he added with a laugh. "You take some harder hits."

Nobody from Heritage fielded the opening kickoff, and Lester pounced on the ball at the Heritage 25 to start the game, but the Lions drive concluded when Thomas overthrew Lester and was intercepted at the 12 by Kaden Swope. Both defenses controlled the action until late in the first quarter, when Lester's rushing methodically moved the Lions down to near the goal line, and Thomas executed a quarterback sneak for the game's first score.

On the ensuing kickoff, Josiah Chiesa recovered a fumble and dashed into the end zone to double the margin after the extra point. On the next possession, Hanson was chased by several Lions, and he tossed a hopeless pass that was intercepted by Jordan. A few plays later, Lester ran over Swope on his way to a 30-yard touchdown run to complete the sudden three-touchdown barrage.

"There were a couple runs tonight where I knew I had some traffic, and that was one of them," Lester said. "I just lowered the shoulder."

Russell added a 28-yard field goal for the halftime score of 24-0, and halfway through the third quarter, Jordan nabbed his second interception. Then, on a fourth down play from the Heritage 32 on the ensuing possession, Jordan was left wide open, and he hauled in the touchdown pass from Thomas. Though the snap and hold on the extra point attempt went awry, Thomas (the holder) scrambled to his right and completed a pass for a two-point conversion that extended the lead to 32-0 with 2:46 remaining in the third quarter.

"We felt we were the stronger, more physical team, and we were tonight," Poag said. "We wore them down physically, and then in the second half, we got some throws when they loaded up to stop (Lester)."

Another interception, this one by Ben Williamson, set the Lions up in Heritage territory again, and eventually Thomas and Jordan connected for a 9-yard touchdown with 10:19 remaining in the game. The Generals (3-1), who were a playoff team in Class 4A last season, got their only score on a short touchdown pass from Hanson to Swope with scarcely more than a second left in the contest.

Christian Heritage will travel to Morristown, Tennessee, next Friday, and will likely be without the trio of Leonard, Locke and Paniagua again due to quarantine measures, but "we'll come up with a way" to succeed, Poag said. "Tonight, I think we sent a huge message across North Georgia."