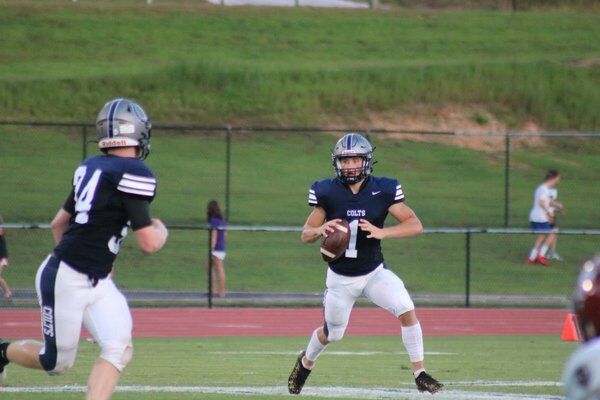 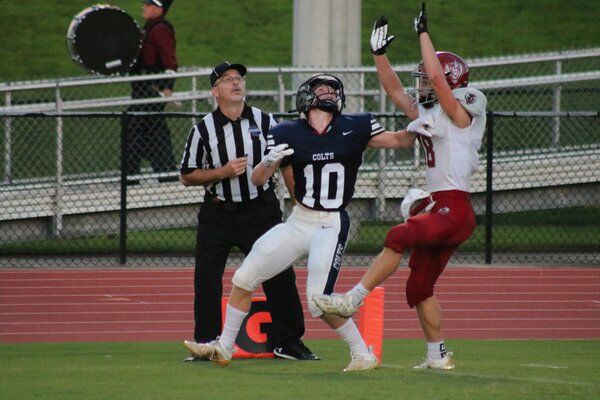 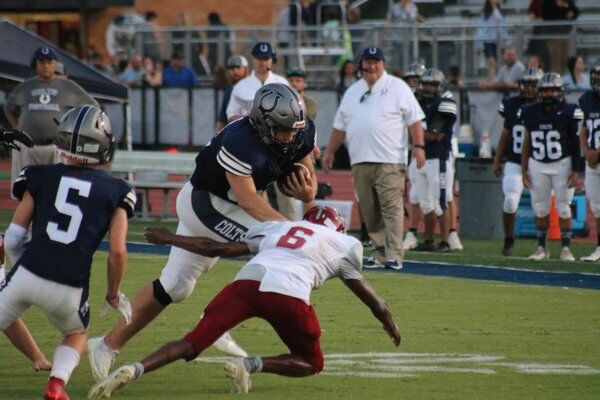 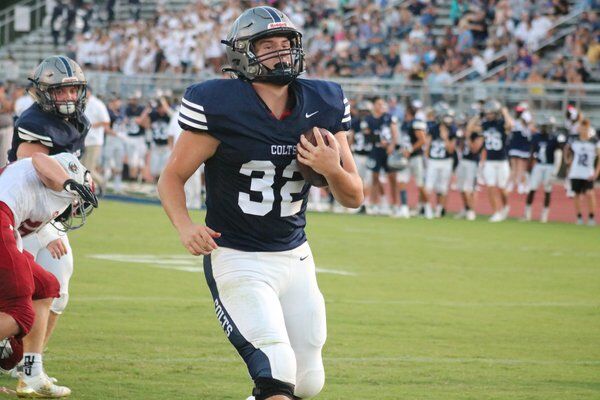 Coahulla Creek High School's Tyler Locklear rushes across the goal line for a touchdown in a 38-7 win over Southeast Whitfield Friday. 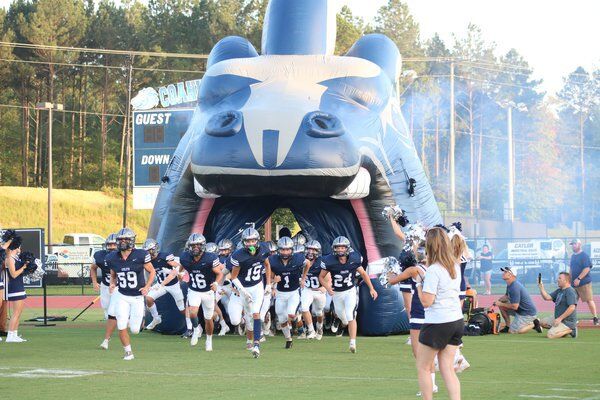 Coahulla Creek High School's football players emerge through a smoking inflatable Colt on to the field prior to a 38-7 win over Southeast Whitfield. 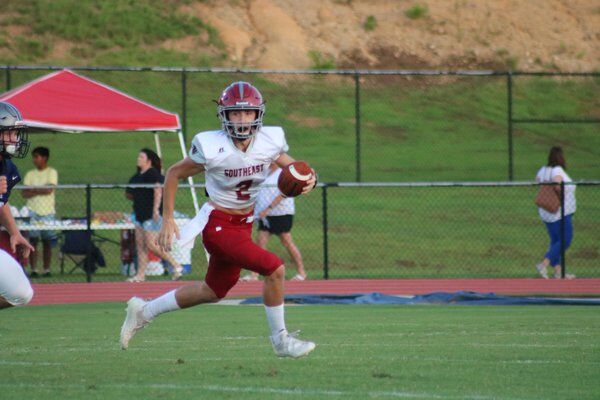 Southeast Whitfield High School's Brayden Miles scrambles and looks for a receiver in a 38-7 loss to Coahulla Creek on Friday.

Coahulla Creek High School's Tyler Locklear rushes across the goal line for a touchdown in a 38-7 win over Southeast Whitfield Friday.

Coahulla Creek High School's football players emerge through a smoking inflatable Colt on to the field prior to a 38-7 win over Southeast Whitfield.

Southeast Whitfield High School's Brayden Miles scrambles and looks for a receiver in a 38-7 loss to Coahulla Creek on Friday.

They wasted no time in erasing that blemish in 2021.

After a wild, triple overtime win over Northwest Whitfield in week one, the Colts kept it rolling Friday, taking control early and downing Southeast Whitfield 38-7 to begin the season 2-0 -- also a first in school history.

"I'm proud of our kids and our school and our community," Coahulla Creek head coach Danny Wilson said. "Now we've got to get back to work."

The game started with back-to-back turnovers. The opening kickoff from Southeast (0-2) took a wild bounce after being dribbled short, and the Raiders pounced on the loose ball. Coahulla's Austin Adams fell on a fumble on the ensuing play, however, and the Colts were off.

Running back Payton Gordon needed just three carries on the opening drive -- gains of 10, seven and then a touchdown run of 49 yards -- to get the Colts on the board with 9:19 in the first quarter.

Gordon was part of a two-pronged running attack for Coahulla Creek that gashed Southeast all night. Gordon finished with 138 yards and the score on 17 carries, and senior runner Tyler Locklear added 90 yards on 13 totes.

"Credit there goes to the offensive line," Wilson said. "If you've got one guy doing it, it may be his ability. Payton and Tyler both have ability, but our offensive line did a great job of controlling the line of scrimmage most of the night."

After Southeast's Job Willis intercepted a pass from Colt quarterback Kace Kinnamon, the junior signal caller made amends on the next Colt drive, fooling the defense with a fake to Gordon and waltzing in for a 13-yard rushing score.

The 14-0 score held at the end of the first quarter, then Locklear busted in for the first of his two rushing touchdowns on the night as the Colts led 21-0 midway through the second quarter.

The Southeast offense had been stymied so far by the stingy Colt defense, but the Raiders began to make some plays late in the half. A Raider drive, engineered by a few chunk runs from quarterback Brayden Miles and running back Jordan Trevino, reached Coahulla Creek's 25, but penalties erased Southeast's best chance to score yet.

The Colts took over after a punt with just 58 seconds remaining in the half, and the Colts raced down the field, thanks to a couple of connections between Kinnamon and Justin Baker, and set up Logan Fowler to nail a 42-yard field goal was time expired.

The 24-0 deficit didn't last long into the third quarter. Southeast kept a little offensive momentum going, and Trevino broke free for a 28-yard rushing score to get the Raiders on the board a couple minutes into the half.

"They could have bowed out at halftime, and they didn't," Wilson said of Southeast. "They came out and got after us."

Trevino was the best option for a Raider offense that struggled to find the kind of explosion they showed in a 35-34 week one loss to Murray County. Trevino tallied 59 yards and the score on 14 carries.

Coahulla Creek didn't let the little bit of momentum they'd allowed the Raiders linger long. Tyson King snuffed out a Southeast drive with an interception, then Kinnamon hit a wide open Aiden Patterson as Coahulla Creek built a 31-7 lead to start the fourth quarter. Locklear iced the game with a two-yard score with 1:58 to go.

After the Colts' first-ever two-game winning streak, the task gets a little tougher for Coahulla Creek to keep the streak going. The Colts are off Friday, then will travel to play at Rockmart, the Region 6-3A champions last season, on Sept. 10.

"We've got to get healed up," Wilson said. "Obviously, they're the best team in our region, and it'll be a test for us to see where we're at.

Southeast, which is playing a non-region schedule, will search for that first win Friday. The Raiders host Gordon Central Friday night at 7:30.