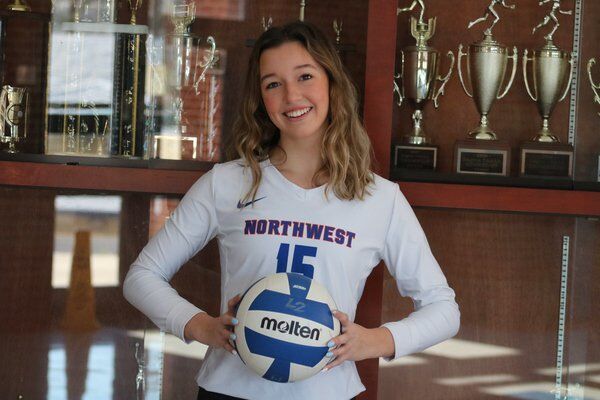 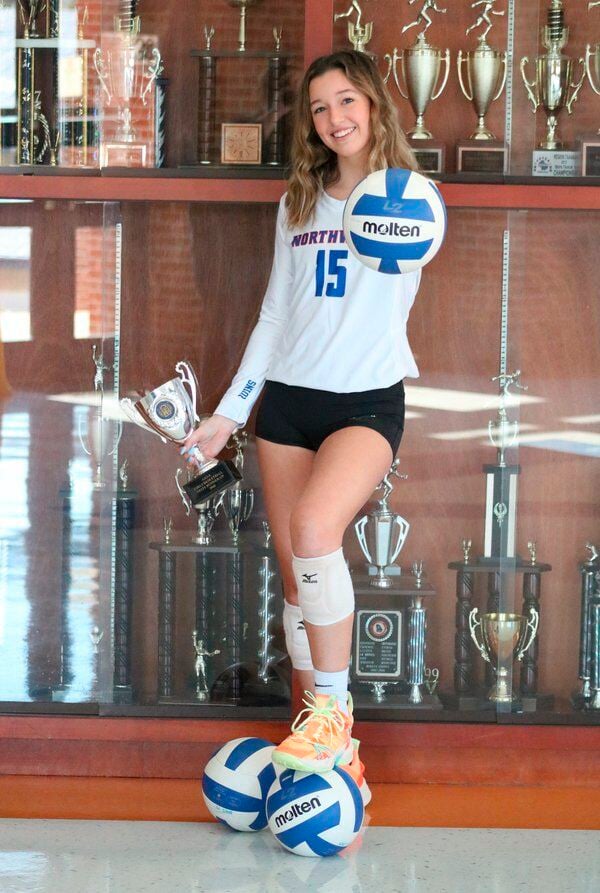 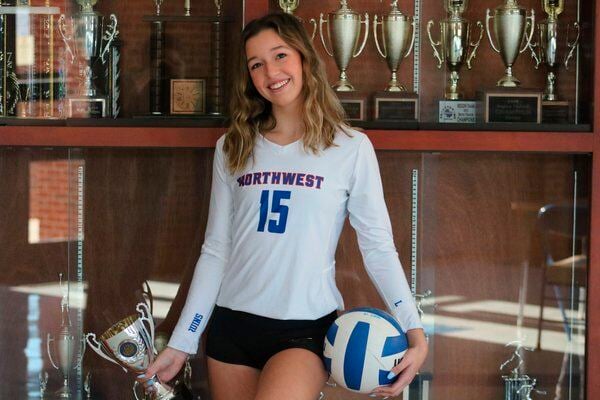 TUNNEL HILL — As Northwest Whitfield High School's volleyball team made a run to the state championship match in 2020, they needed many players to step up.

The Lady Bruins had an experienced and talented team with capable players, but so did the competition.

"When you get to a higher level of play, every weakness you have is exposed," Northwest volleyball head coach Kelsey Ikerd said. "Emma Hayes is a player that doesn't have very many weaknesses, and she was able to shoulder that burden."

Hayes, a junior hitter for the Bruins, didn't exhibit many weaknesses throughout the season, either.

Hayes piled up 319 kills, 290 digs, 98 aces, 45 assists and 29 blocks as she helped lead the Lady Bruins to the state title match for the first time in the school's history. Northwest fell to perennial title contender Marist, but Hayes thinks it's only the beginning for the Bruins.

"Losing the championship was really hard," Hayes said. "I've been going to so many lessons just working to get better for next year. I really think we can be just as good next year. We lost a lot of people, but everyone is working hard to get back to that spot next year."

If Hayes has another season resembling 2020, Northwest Whitfield could have a shot at making more school history next season.

For her efforts, Hayes has been named the Daily Citizen-News Volleyball Player of the Year.

"The kind of player that every coach wants"

As an outside hitter for the Lady Bruins, Hayes usually could be found making her mark on the match by flying high to slam down a ball across the net for a point.

"Her raw athleticism is just something most players wish they had," Ikerd said. "She just has an amazing vertical."

Hayes has plenty of skill she's developed on her own, but she credits genetics for that part of her game.

"I was just really blessed by my parents with high-jumping ability," Hayes said with a laugh.

"It's really a security blanket," Ikerd said. "You really know when she gets set, she's going to be able to do something positive with the ball."

Beyond that athleticism, Ikerd said, is a team player who can step into whatever role helps her team.

"Emma is the kind of player that every coach wants on her team," Ikerd said. "She does whatever you ask her to. There were moments this season where I wanted to give her a break on the front row, and she'd work twice as hard to make every moment she was on the back row valuable."

When she is in that position on the front row, Hayes is always watching for opportunities to attack.

"She's our sniper," Ikerd said. "She's a silent attacker, but she'll pinpoint little mistakes and weaknesses on the other team's back row and expose them."

"The outside hitter for Jefferson was ranked highly in the state in all classification, and Emma hadn't really gotten recognition, and she knew that," Ikerd said. "Emma demolished that girl in that game."

Hayes kept fighting for the Bruins in the championship match, though they fell short.

"She is just a player and person who doesn't get rattled," Ikerd said. "In the state tournament, we were going up against a huge opponent, and, even when things weren't going our way, she stepped up with confidence every time."

Hayes says she owes her success to the passing of her teammates.

"As a hitter, you're only as good as your setters, and mine were just incredible," Hayes said. "They helped me a lot to get me in positions where I could contribute as well as I did. During the game, I really connect with my setters a lot. If something's off, I tell them and they fix it, and that helps you be a much better hitter."

One of those setters is another Emma who is just as talented as Hayes.

Emma Allen, who was the winner of the all-area player of the year award in 2019, forms a prolific partnership with Hayes, on and off the court.

"She's one of my best friends, and we're really more like sisters," Hayes said of her same-named teammate. "On the court, she's my setter. She's awesome. Sometimes I'll yell to her something on the court, and she'll yell something back to help me. We really just have a special connection on the court."

"Their camaraderie is something you hope for as a coach," Ikerd said of Emma and Emma. "Anytime there's a crucial point of the game, I can just say 'Emma, I need you to score,' and both of them will be like 'OK.' They both have the audacity it takes to step up and be the one that makes the play."

The on- and off-court chemistry between the two Emmas can be found up and down the Lady Bruin roster.

The team shared superstitions throughout the season. Most had a particular order that they would suit up for a game, and the team even began wearing the same hairstyle for good luck.

"We just connected really well," Hayes said. "We came in and worked hard every single day, and we were able to overcome a lot of the challenges we faced. I kind of connect with everyone. I wasn't really one to go with one group."