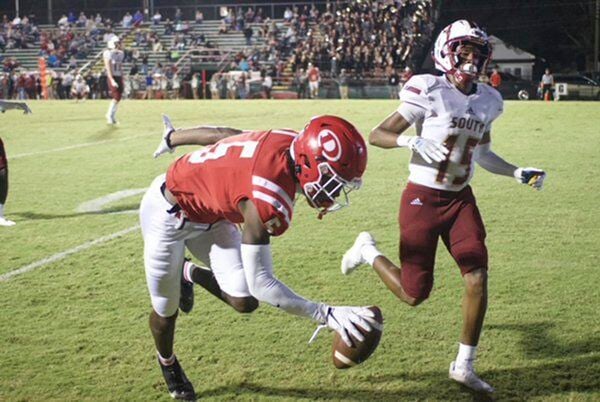 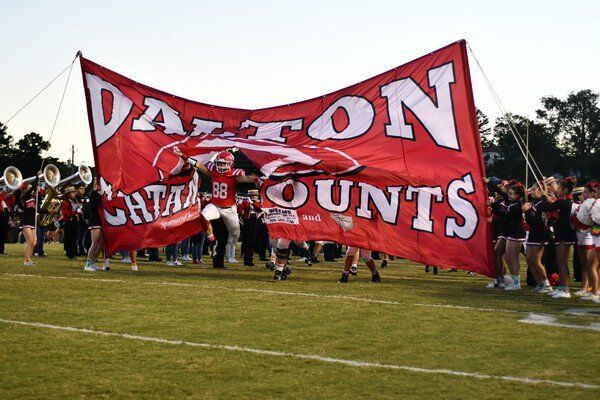 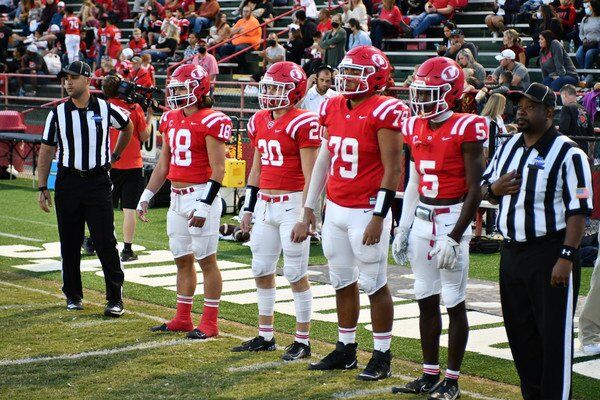 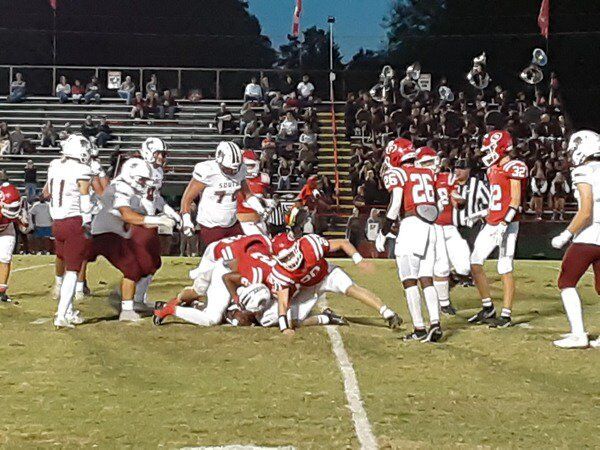 A trio of Dalton Catamounts take down South Paulding running back Ta'von Wright during Friday's game at Harmon Field. 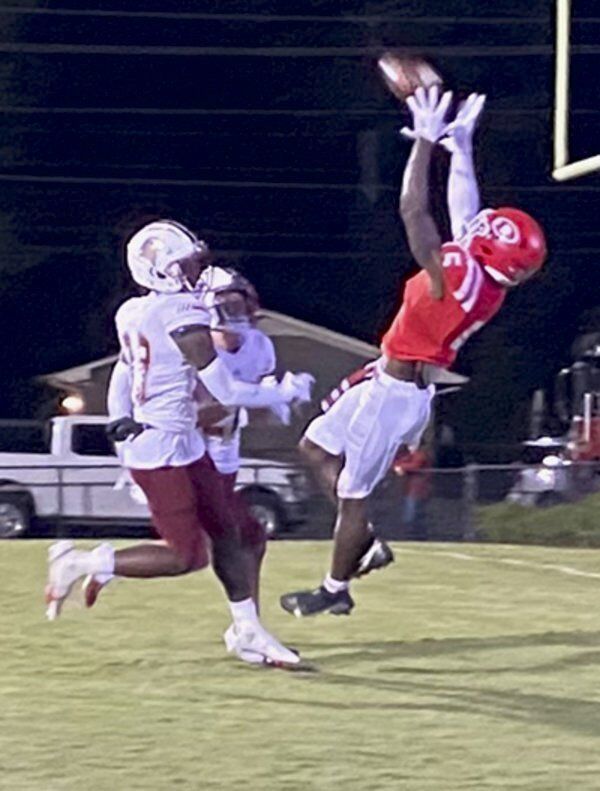 Dalton High School wide receiver Karim Page goes up to haul in a touchdown pass during the second quarter of Friday night's game against South Paulding.

A trio of Dalton Catamounts take down South Paulding running back Ta'von Wright during Friday's game at Harmon Field.

Dalton High School wide receiver Karim Page goes up to haul in a touchdown pass during the second quarter of Friday night's game against South Paulding.

In a game featuring more fireworks than the National Mall on the Fourth of July -- the lone punt occurred with 5:20 left in the shootout -- South Paulding High School's superior firepower carried the Spartans to a 55-48 win at Dalton High School Friday.

The Catamounts also turned the ball over three times to South Paulding's zero, but "three turnovers didn't get us beat; giving up 55 points did," said Dalton's first-year head coach, Kit Carpenter. "You score 48, you're supposed to win."

Dalton's (1-4, 0-2 in Region 5-6A) defensive struggles were due in large measure to "100 pounds of (offensive) linemen," Carpenter said. "They have good players (who) blocked us and just blew us out of the hole."

Jamarion Wilcox, who had 264 yards on 23 carries Friday for South Paulding (4-1, 2-0 in Region 5-6A), broke outside a mass of humanity in the center of the field for the go-ahead, one-yard touchdown with 81 seconds remaining in the game. A sack of Dalton quarterback Brady Pendley by Amir Scarver for a loss of 18 doomed the Catamounts to a third-and-28 from their 14 yard line, and a pair of incompletions ended the game.

Under heat from a pair of Spartans, Pendley threw a pick to Brandon Rangel on the game's opening possession, and on the third play of the ensuing 42-yard drive, Ta-von Wright rushed in from six yards out, but the extra point attempt was missed. Pendley and his Dalton offense responded a minute later, with a 53-yard touchdown pass to Journey Boston, and the extra point gave the home team the lead, 7-6.

Spartans junior quarterback Kasen Weisman, who has been offered by the University of California to continue his career in college, threw a 12-yard touchdown pass to Alex Watkins with four minutes remaining in the opening quarter, but Boston got the edge and outran the Spartans defense for a 26-yard touchdown to put Dalton back on top, and then the Catamounts recovered an onside kick. On the first play, Pendley -- who hit 17 of 24 passes for 249 yards and five touchdowns -- went to the air, and Karim Page won the battle against his defender for a 40-yard touchdown.

The Catamounts -- who lost to the Spartans at South Paulding last season, 20-15 -- led 21-13 at the end of Friday's first quarter, but the visitors closed within two on a four-yard touchdown run by Wilcox less than a minute into the second quarter. Pendley's 37-yard connection with Page took the Catamounts to the Spartans' doorstep, and running back Tyson Greenwade -- who carried 17 times for 101 yards -- ran in from three yards out on the next play to push Dalton ahead by eight.

"Our offensive line blocked great, we ran it great, and we threw it great," Carpenter said. "If we keep chopping wood, it'll turn for us."

Warner Ross recovered Dalton's second successful onside kick of the first half, and a few plays later, Pendley lofted a ball over a pair of Spartans defenders into the arms of Page -- who had eight grabs for 149 yards -- for a 10-yard touchdown, but the two-point conversion failed, so Dalton led 34-19 with 7:18 remaining in the opening half. Only 17 seconds later, South Paulding closed within eight on a 60-yard touchdown dash by Wilcox.

Pendley's pump fake worked to perfection, as it allowed Page to get behind his defender, and their 42-yard touchdown connection extended the margin to 15. However, Weisman's four-yard touchdown rush with 21 seconds left in the half, and then Wilcox's successful two-point conversion run, brought the visitors within seven at the break.

A two-play drive punctuated by Wright's 13-yard touchdown run 30 seconds into the second half tied the game at 41, but each team's defense made a stand on a fourth down to send the game to the final stanza tied at 41.

The visitors seized the lead 28 seconds into the fourth quarter on a 36-yard touchdown from Weisman (who was 11-of-18 for 128 yards) to Wilcox -- on fourth-and-10 -- but Dalton then scored their own fourth-down touchdown. Pendley rolled to his right and threw back to his left to a wide-open John Frank Patterson on fourth-and-5 for a 12-yard touchdown to tie the game with 6:40 remaining.

Dalton's defense then forced the game's only punt, but Pendley's second fumble gave the Spartans the ball at Dalton's 43, and that drive concluded with Wilcox's game-winning touchdown.

"They have tremendous talent and a great line, but our kids played their hearts out," Carpenter said. "We came up short at the end, but we're close to being a good team, and we just need to get over the hump."

Dalton travels to Rome Friday for a 7:30 p.m. tilt, while the Spartans visit Carrollton.

WAYNE DeANDRE SALTERS - Age 35, of Chattanooga, TN passed on Friday, December 31, 2021. Wayne was born in Detroit, MI on December 17, 1986. He is preceded by his father, Scott Louis Salters. Wayne is survived by his mother, Myra Salters; Sister, Virginia Salters of Chattanooga, TN; Brother, …

Mr. Austin Allen Luna, age 23, of Chatsworth, Georgia, departed this life Friday, January 7, 2022, at his residence. He was born March 11, 1998 in Dalton, GA. He was preceded in death by his grandfather Paul Ridley, aunt Diane Adams. He is survived by his father and stepmother, Keith and Jua…