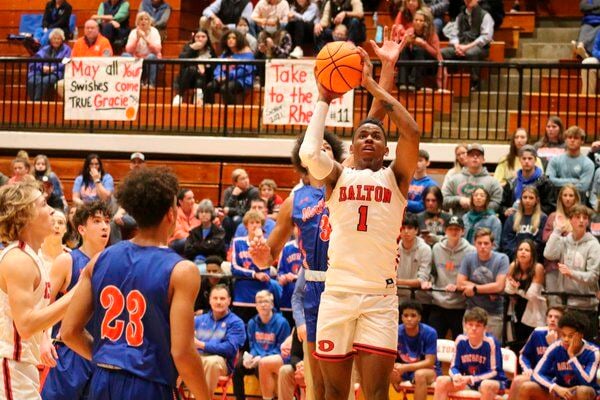 Dalton High School's Franklin Almonte puts up a shot in a February game. 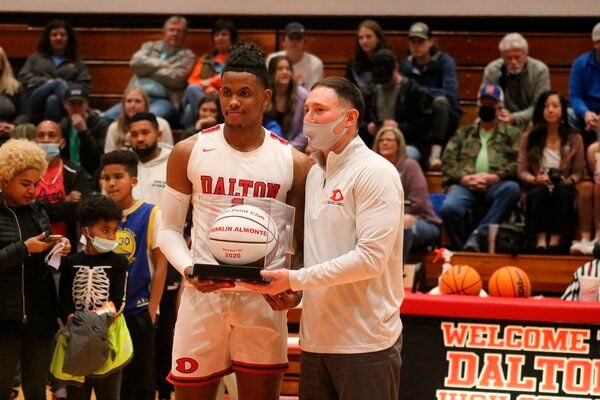 Dalton High School's Franklin Almonte puts up a shot in a February game.

Franklin Almonte has plenty of skills on the basketball court.

The Dalton High School senior forward led his team in scoring in 2020-21 with an average of 18.4 points per game.

He used his 6-foot-5 frame and jumping ability to swat an average of 3.3 shots per contest, also leading the Catamounts.

He'd even steal the ball and dish out a few assists on any given game night.

But if you ask Almonte what defines his game, there's an obvious answer.

It's hard to miss Almonte while watching a Dalton game. He's the one flying into the air and grabbing the ball as soon as it comes off the rim.

Almonte pulled down an average of 16.7 rebounds per game this year for the Catamounts.

A milestone often used to judge a high school player's impact and longevity is whether they've joined the 1,000-point club by reaching quadruple-digits in career points scored. Almonte reached that this season and finished with over 1,300. In a Region 5-6A tournament game late in the season, Almonte surpassed 1,000 rebounds as well.

For his stellar senior season, Almonte has been named the 2021 Daily Citizen-News Boys All Area Basketball Player of the Year, repeating after receiving the award last year.

Almonte and the Catamounts came into the 2020-2021 season hungry, he said. As a senior, Almonte knew it would be his last chance to make an impact at the school.

"Being a senior leader sometimes takes a while," said Ryan Scoggins, Dalton's head coach. "For Franklin, I think that switch flipped pretty early. He realized that 'We're seniors, we need to do something special.'"

For a Dalton team stuck in a tough region in a tough Class 6A, team success has been scarce in the last few years. The Catamounts had not made the state playoffs since 2012 prior to this season.

Dalton had an up-and-down year at times, eventually ending at 14-14, but picked a good time to play their best basketball of the season. Dalton got wins in the first two rounds of the Region 5-6A tournament after entering as the seven seed, including a quarterfinal win over third-seeded Rome. Dalton lost in the semifinals to Alexander but earned the Catamounts' first playoff berth since Almonte was a kid still living in the Dominican Republic.

"We were all proud to be able to make it to state again," Almonte said. "Last year, all the seniors talked about wanting to do it. I think people will remember us for making state for many years."

In that win over Rome, which clinched a playoff spot, a motivated Almonte put up a near-triple double with 18 points, 21 rebounds and nine blocks.

"I think it meant a lot to him to get to the playoffs and get a plaque put up on the wall," Scoggins said.

Rebounding has always come easy for Almonte, so it's no wonder he helped the Catamount program rebound.

"He has such an energy on the floor," Scoggins said. "There's so many times there'd be a loose ball or a ball go up for a rebound, and all of a sudden out of nowhere, there'd be Franklin."

The importance of rebounds isn't lost on Almonte.

"I think it's very important," Almonte said. "Sometimes you can add another possession to the game for your team. That makes a big difference. I think it really helped us a lot this year."

That rebounding skill is always a focus for Almonte, but he's also put in work on other aspects of his game.

"I have gotten better at my handling and dribbling this past year," Almonte said. "I'm always working on my body, trying to get in better shape and be able to jump higher."

Ball handling is something Almonte knew he needed to improve as he prepared to play in college. He'll be suiting up at Dalton State College this fall. But those developing skills allowed Scoggins, who was Almonte's coach for the last two seasons after getting the Dalton job in 2019, to use him in more creative ways on offense.

"When I got here, he could obviously rebound and he was a pretty good shooter, but he's really been able to take care of the ball more," Scoggins said. "There were times we were running isolation plays for him to take on a guard. He's put in the time."

"He's that player a lot of the times that the other team had to double," he said. "All of a sudden he'd kick the ball and we'd get an open shot."

Almonte's hard at work improving his other skills, but he knows which one makes him special.

"I think I do have a kind of special sense for rebounding," he said. "Whenever somebody shoots the ball, I'm able to see where the ball will probably hit and bounce off."