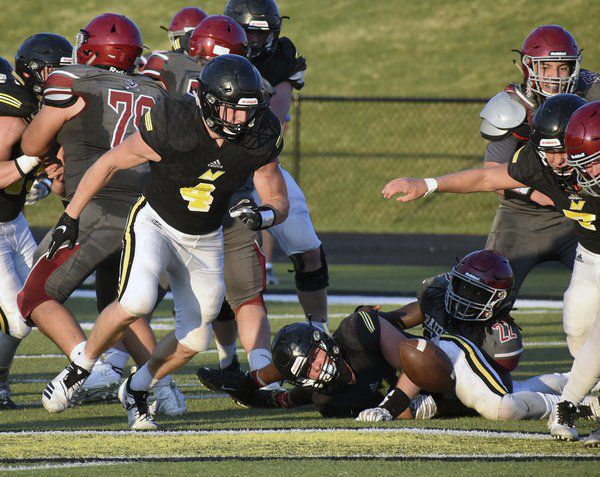 North Murray High School football player, No. 4, makes a move for a fumble during a spring scrimmage this past May. 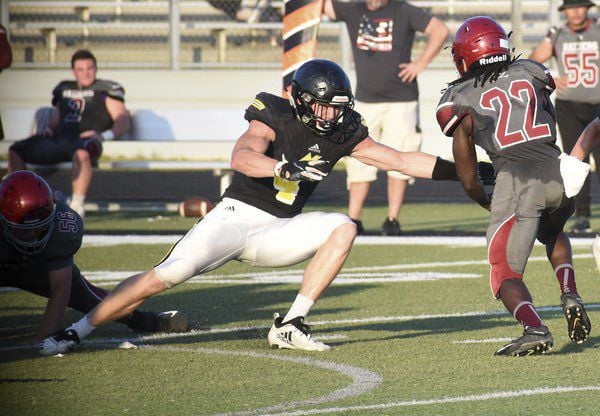 North Murray High School football player, No. 4, makes a move for a fumble during a spring scrimmage this past May.

Chaisen Buckner said after a visit to Annapolis, Maryland, this past weekend, his college decision was a no-brainer.

"I made my decision in his office," Buckner said. "I thought that was probably where I'd end up going, but once I got there and saw everything they had to offer it really cleared up some things for me. I could tell their coaches really wanted me there."

The 6-foot-3-inch, 210-pound linebacker should remain a key contributor for the Mountaineers this coming season, after starting on both sides of the ball since his sophomore year. Buckner finished his junior year with 104 tackles, 12 tackles for loss, three forced fumbles and one blocked kick returned for a touchdown. He was named a Daily Citizen-News All-Area first-team member and also named a Region 6-3A first-team member.

Navy played its first football season in 1879. Annual games against the University of Notre Dame and Army are among the most pageant-filled and enduring rivalries in college football. The Army-Navy game, which has been frequently attended by sitting U.S. presidents, marks the end of the college football regular season, and Navy is scheduled to play against Notre Dame in Dublin, Ireland, in 2020. The Midshipmen finished 3-10 last season, but as recently as 2015 won 11 games.

"Coach Niumatalolo is a competitor," Buckner said. "They just had one of their worst seasons in school history, and he's already hired a nutritionist, and they're building new locker rooms and team meeting rooms. They don't want that to happen again."

The athletic programs at service academies differ from other college athletic programs in that they do not offer athletic scholarships. Those who attend the service academies typically must be nominated by a member of Congress or the vice president of the United States and then receive an appointment. All students who attend the Naval Academy are on full scholarship but must serve five years of active duty, according to Navy's athletics website.

Buckner is in the process of pursuing a nomination to the Naval Academy.

"That's another thing that kind of sealed the deal," Buckner said of being able to retain his scholarship if he decides to quit football or is injured. "If it ends up not working out I'll at least have my education paid for. I've always had my mind set on engineering, something in that area, but you get a few years to figure that out."

North Murray will begin its season on Aug. 30 at Rabun County. The Mountaineers finished 6-5 last season after a first-round playoff exit, and Buckner said this year's senior class has high expectations. With his college decision finalized, Buckner said he's now free to focus on this year's team and the goals ahead.

"It's nice to be done with it now with the season starting," Buckner said. "A lot of people have us picked having a very disappointing season, and it's fuel on the fire. We'd love to start off the year knocking off Rabun County."