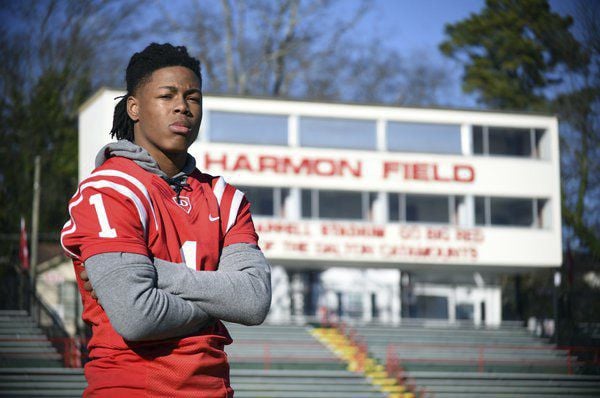 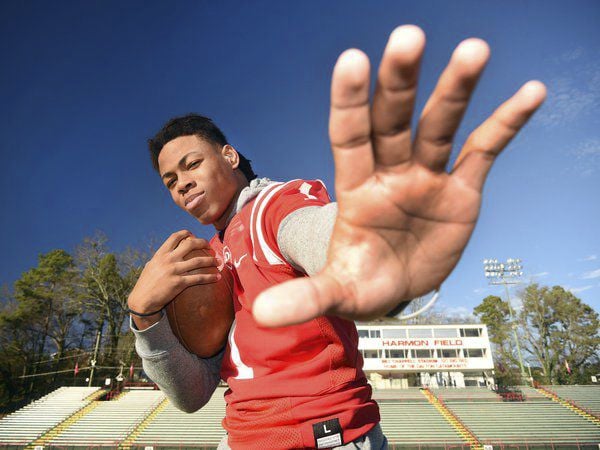 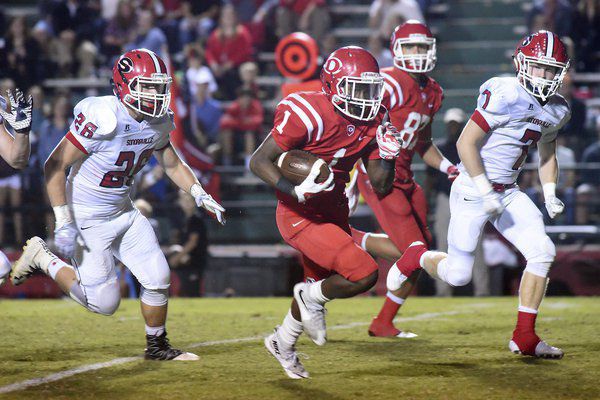 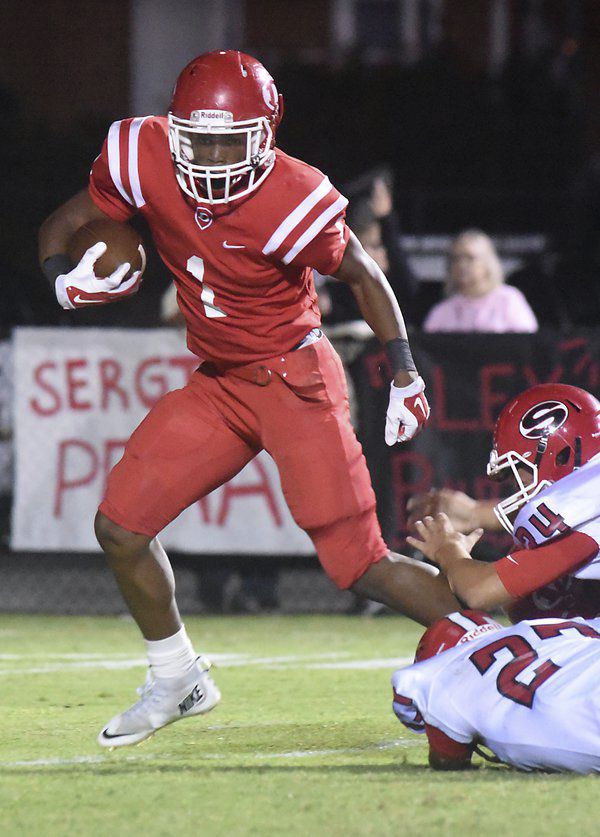 Sophomore Jahmyr Gibbs has broken out as a star running back for Dalton, topping 100 yards in each of the team's past two games. 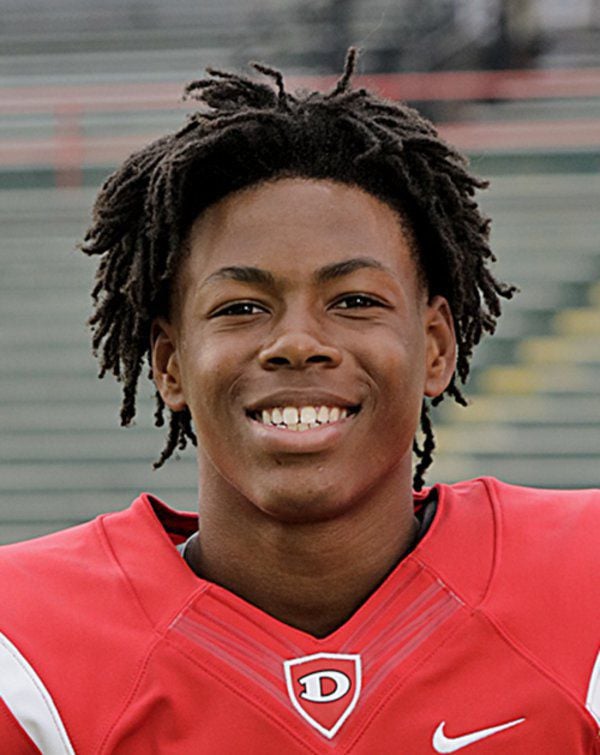 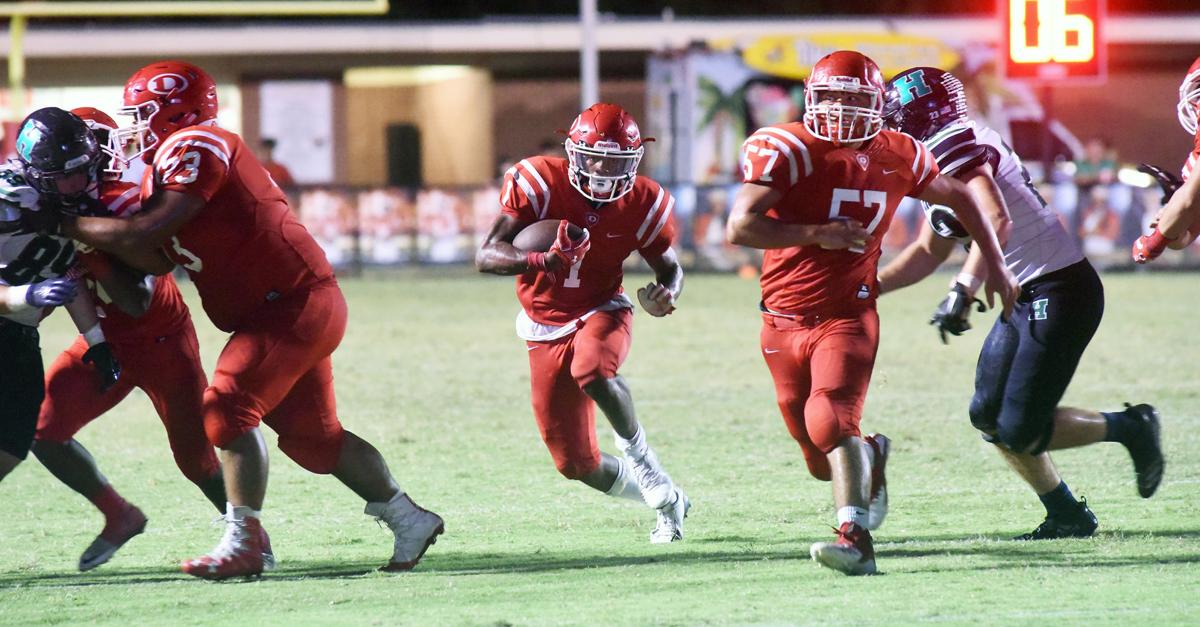 Dalton offensive lineman Edrehy Garcia (57) leads running back Jahmyr Gibbs through the hole for a gain in Friday night's game at Harmon Field against Harrison. The third-ranked Hoyas beat the Catamounts 38-17.

Like his running style, Jahmyr Gibbs’ path in life hasn’t been a straight line.

Sitting in the stands at Harmon Field, it's easy to see the Dalton High School running back leave defenders in his wake as he gallops down the field. But you would never know what has led him to where he is today.

You wouldn't see his single grandmother who raised him or how he bounced around from home to home. You wouldn’t see all the people who have helped and are still helping the budding football star overcome life's obstacles and become the young man he is destined to be.

Gibbs' ability on the football field is apparent. This past season, the junior accounted for 1,895 total yards and 22 touchdowns. He amassed those numbers in arguably one of the toughest regions in the state — four teams in Region 6-6A finished in top 10 of Class 6A — all while missing two games at running back and being the central focus of every defense the Catamounts faced.

For his efforts Gibbs has been named the 2018 Daily Citizen-News Player of Year.

Where the football field ends and where life begins is where Gibbs’ story becomes unique.

Coming from a long line of athletes, it was only natural Gibbs would gravitate toward athletics. His great-uncle David “Bo” Willis starred for the Catamounts football team in the 1970s and his grandmother and mother both ran track at Dalton. His mother was also the first African American to play fast-pitch softball for Dalton. Additionally, former Northwest Whitfield star defensive lineman Isaiah Mack is Gibbs’ cousin, and Gibbs has a number of other cousins who have played football under the lights at Harmon Field.

Gibbs’ grandmother, Angela Willis, has raised him and been his legal guardian since he was 13. Despite challenges from a young age, Willis said she’s always had a feeling there was a higher plan for his grandson.

“I’m so proud of the man he’s become,” Willis said. “A lot of people don’t know what he’s been through.”

Eight years ago, Willis and Gibbs found themselves staying in a local shelter. Through a program called Family Promise, the pair received help with everything from food, to clothing, to a comfortable place to stay for a few weeks. Dusty Ross, mother of current Dalton defensive end John Ross, happened to be volunteering in the program at the time and couldn’t have predicted the impact it would have on her family.

It was a brief meeting between the Ross family and Gibbs, but it left an impression. The two parties lost touch over the next few years but would reunite later in Gibbs’ story.

A lot of Gibbs’ life circumstances have come down to chance, but for those whose lives have been touched by Gibbs, crossing paths with the young man has felt bigger than a simple coincidence.

“From the moment we met, we connected on a level that was way bigger than football,” former Dalton quarterback J.P. Tighe said. “We bonded right away because we were both into the same stuff, but it was much more than that.”

During the 2017 season, Tighe was the senior quarterback for Dalton and Gibbs was a sophomore running back. The two bonded in preseason workouts, and as the season drew nearer Gibbs began spending more time at the Tighe household. After a few nights, Tighe asked Gibbs if he wanted to stay for good.

“I’ve tried to get a better understanding of how things were before he was with me,” Tighe said. “I think he would spend a few nights at one house and then a few nights with his grandma. I think if he didn’t stay with us at that time, he would have kept going house to house probably.”

Tighe graduated from Dalton this past spring and moved to Statesboro to play baseball at Georgia Southern University. Gibbs has since moved in with another family, the Ross family, in a full-circle moment for both Gibbs and the Rosses. Having a permanent residence is something many people take for granted, but for Gibbs, it’s been anything but a guarantee. His grandmother said it’s been difficult for her at times playing both parent roles.

“I’m his grandma, I’m not his mama or his daddy,” Willis said. “Jah came from a broken home, so I always wanted him to be around good people and to know that every home isn’t a broken home. Family is about more than blood or race, it’s about who loves you and supports you.”

Naturally shy, Gibbs' growth as a player and a person is still in development. He's gained more than 30 pounds since his sophomore season and a few inches in height, as well. He won’t tell you much about his accomplishments, but talk with anyone close to him and you’ll hear the same few phrases over and again.

Humble. Respectful. A joy to be around.

“He doesn’t want any excuse cards,” Dalton football coach Matt Land said. “I don’t know that many of his teammates even know his situation. He’s a special, special young man.”

On the field, Gibbs made the game look easy this past season. Whether lining up at running back, cornerback, wide receiver or kicker returner, Gibbs stood out. It’s his aptitude for making tacklers miss that has college coaching staffs beginning to notice. Joe Windon, the Director of Southeast scouting for NationalPreps.com, said Gibbs has only scratched the surface in terms of his potential.

“What separates Jahmyr is that explosiveness,” Windon said. “He has the ability to change gears faster than other people. He does that on an elite level.”

“I think some SEC, ACC and Big10 schools will start coming because he can play at that level,” Windon said.

Gibbs said his best play of the season was an 80-yard touchdown run against Harrison, and his favorite play in the playbook is the Buck-sweep where he follows two pulling guards around the outside. He said football just comes naturally to him and said this past season reminded him of recreational football when touchdowns came in bunches. He said this year's game against Northwest Whitfield was the most fun he had all season, even though it was the game where he injured his shoulder, causing him to miss two games as the primary running back. Prior to the injury he returned a kickoff for a touchdown.

Fans can see Gibbs' love for the game in his celebrations with teammates following a touchdown or big play, and he clearly values the virtues of the sport.

"I love the competition. I love hitting. You can’t do that anywhere else," Gibbs said. "It helps me get away from everything. The bond between players and teammates, it’s like family."

Another skill that makes Gibbs so dangerous on the field is a signature move some call the "dead leg." The move looks simple, but not every running back can execute it efficiently. While running full-speed, the running back plants his leg in the ground and changes direction, causing the oncoming defender to miss the tackle, usually in an embarrassing fashion. University of Georgia running back D'Andre Swift has popularized the move in recent years, and Gibbs looks eerily similar to the Bulldog running back when executing the move.

Beyond his growth on the field, those who know him best say Gibbs has matured significantly in the past few years. Tighe said Gibbs has grown leaps and bounds in his outwardness since the two first met. Tighe’s mother, Allyson Coker, said Gibbs is different than any other teammate her son has ever had, and spoke glowingly of her time spent living with Gibbs when he was a sophomore.

“A lot of kids have that sense of entitlement. There’s none of that with Jahmyr,” Coker said. “He has a humble spirit. He’s just a delight. I think I grieved not having him in my house just as much as when J.P. went off to school.”

Gibbs has continued to live with the Ross family but his grandmother is still very much involved. Willis works in conjunction with the Ross family, coaches and teachers at Dalton to support Gibbs both athletically and academically. Through current and former Dalton football players, Gibbs now has the family he never really had. It isn’t charity work for those involved in Gibbs’ life, however, because those closest to him speak so highly of the soft-spoken young man.

“He is a football-deserving story, but that’s not the story,” Land said. “The real story is the fact that he inspires people to be involved, to care, to help each other.”

Gibbs also may not yet realize this is only the beginning. Next on the docket for Gibbs is the GACA North-South Football Classic on Dec. 29. The game will be played at Roswell High School at 3 p.m. and will feature some of the best junior talent in the state.

The next calendar year should bring a lot of opportunity for the Dalton running back, and his grandmother said she has always seen it coming. Willis said beyond the touchdowns and yards, she’s most proud that her grandson has become the young man he is today.

“There’s stuff that can happen that can make you go in the other direction because of things that happened in your life,” Willis said tearing up. “I’m just so proud of him. The big almighty has a plan for him.”