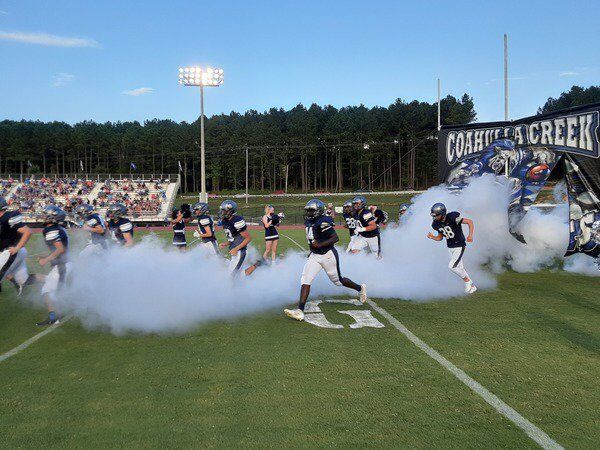 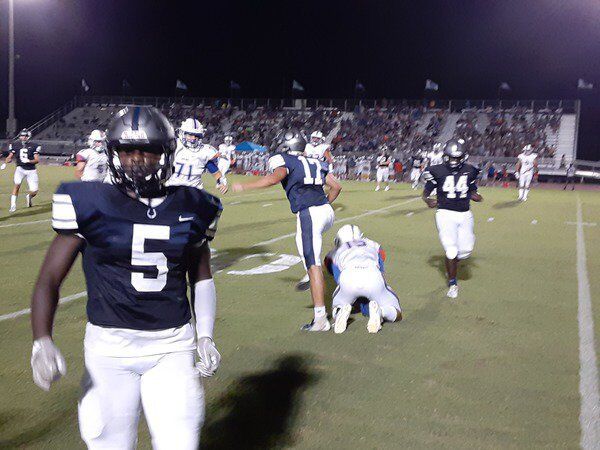 VARNELL -- The Coahulla Creek High School Colts fumbled on the first play from scrimmage Friday, and it was returned for a Northwest Whitfield touchdown; two additional fumbles -- as well as an interception and multiple failed fourth down conversion attempts -- doomed the Colts in a 27-6 season-opening loss to the visiting Bruins.

"Turnovers and mistakes stopped our drives and our momentum," said Danny Wilson, who made his debut as Coahulla Creek's head coach Friday after serving as the team's defensive coordinator the past three seasons. "We need to get better, but I'm really proud of how our kids played."

"On the offensive line, we have five kids who haven't played much varsity football, and they played well," said Wilson, who has been a head coach at three other schools and won a state title in 1994. "On defense, our guys played with the effort you should."

"It was a very sloppy game all the way around, and both teams made plenty of mistakes," owing both to it being the season opener for two inexperienced squads, as well as due to the unique nature of this offseason on account of the new coronavirus (COVID-19) pandemic, said Josh Robinson, Northwest Whitfield's head coach, whose team moved to 1-0. "We had several drops and a couple big plays called back due to penalties," the latter of which is "the most inexcusable."

Coahulla Creek's Tyler Locklear's fumble on the game's opening play was returned 26 yards for a touchdown by Damian Seritt, and that was "so good for him," Robinson said. Seritt "hasn't played football in 18 months due to shoulder surgery for a torn labrum."

The Colts (0-1), who were 2-8 last year, scored their only touchdown on a fumble return, as well, as Manny Dominguez scooped up Chase Gentry's fumble and returned it 70 yards with 5:50 remaining in the first half. The extra point failed, however, so the Bruins maintained the lead, 7-6.

Coahulla Creek lost the ball again, deep in their own territory, and Junior Aguirre pounced on it for the Bruins at the 17 yard line with 3:27 left in the opening half. A few plays later, Gentry plunged in for a 3-yard touchdown with 2:07 left until the break, and Yahir Zapata's extra point made it 14-6, which would be the score at halftime.

Early in the third quarter, another Coahulla Creek fumble set the Bruins up at the Colts 23, and a quick screen pass to Ray Morrison, who eluded multiple defenders and stiff-armed another, moved the ball to the 5. Adrian Reyes rushed in for the touchdown, and the Bruins extended the margin to 21-6 with 8:05 left in the third quarter.

Quarterback Owen Brooker, who started last year as a freshman for the Bruins, hit his favorite target on a quick slant early in the fourth, and with an open middle of the field, the speedy senior Matthew Redmond took it all the way to the house for an 82-yard touchdown. Though the extra point was missed, Northwest built a three-touchdown lead with only 9:58 remaining in the game.

Coahulla Creek's final scoring chance died on a tipped ball that was intercepted by Jayden Santiago in the red zone with 1:24 remaining.

"We have eight new starters on defense and seven new starters on offense, but that's no excuse for how sloppy we played," Robinson said. At least "our front seven played well," especially senior Daiman Banta, who was "outstanding tonight."

Northwest's defense keyed on Coahulla Creek's rushing attack, knowing that was how the Colts would primarily try to move the football, and "we stopped (Locklear) in the hole, not letting him get up field," Banta said. Seritt's fumble return for a touchdown on the first play only enhanced that unit's "confidence" for the rest of the game, as "that fired up the entire defense."

Due to the new coronavirus (COVID-19) pandemic, many schools around the country have postponed their football seasons, and in Georgia, season openers were delayed by two weeks.

Offseason activities were curtailed, and teams have had to take numerous steps in the interest of social distancing and general hygiene.

Fans were encouraged to wear masks Friday, as well as social distance, and attendance was limited.

While Wilson's naturally disappointed to lose the opener, "honestly, we're just glad to play," he said. "This is my 34th season of high school football, and it felt a lot like my first one, because of all the unknowns."

Indeed, players had moments of doubt whether there would even be a season due to the pandemic, and it's impossible to forget this season is unique, but "it felt normal once we were out there flying around," Banta said. "It felt great to be out there tonight."