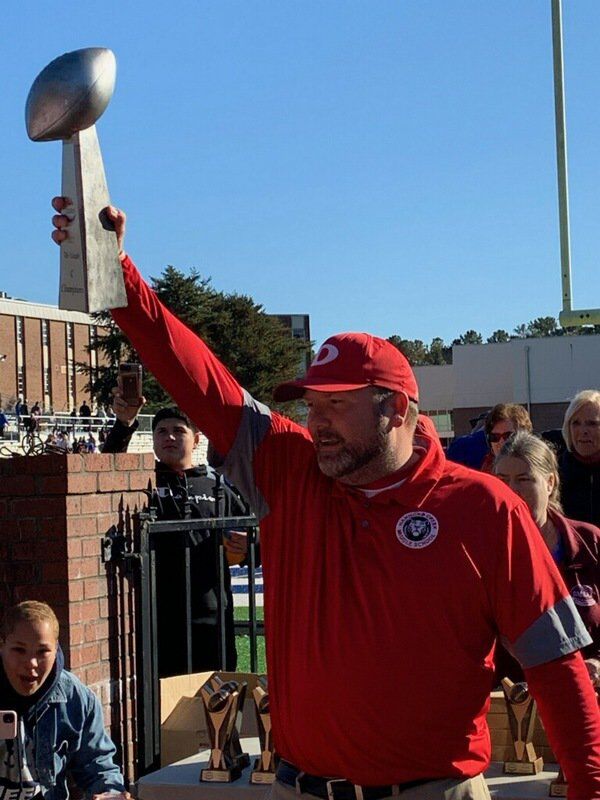 When Dalton Public Schools opened Hammond Creek Middle School for sixth and seventh grades in August, the new facility and new grade configurations created more opportunities for academic innovations and educational support. However, the school also seized the opportunity to begin separate sixth and seventh grade football teams and join the Georgia Middle School Athletic Association (GMSAA). The GMSAA is the largest middle school athletic association in the state and offers a competitive regular season followed by a three-round playoff.

"Our first football season filled me with pride, gratitude and awe for what our athletes accomplished," Hammond Creek Principal Lauri Johnson said. "The teamwork and leadership skills that students learn on the field carry over to the classroom and beyond. I can’t wait to watch these young men continue to grow … the best is yet to come for (them).”

Both teams dedicated the season to offensive line coach Sean Hammond who passed away before the first game in August from COVID-19. Each team wore “Hammond Way” compression shirts as part of their gameday attire.

The seventh grade Hammond Creek Tigers at one point suffered three straight losses and were at risk of missing the playoffs. However, the team rallied in the second half of the season to enter the eight-team playoff as a three seed. The team would never lose again, knocking off second-seeded South Cobb on the road with a dominating 42-12 win. Next, the Tigers traveled to top seed Cartersville looking to avenge a previous loss in the regular season. The Tigers left victorious, 28-14, to set up a showdown with Walton. Playing at a neutral site in Marietta, the Tigers prevailed 14-12 in a hard-fought battle that featured two goal line stands by a stout defense and multiple long, clock-consuming drives by a physical offensive attack.

The younger Tiger team also completed a successful first season with notable regular season wins over Rome, Creekview, Cambridge and Sprayberry. The Tigers entered the playoffs as a two seed. Playing with teamwork and determination throughout the season, the Tigers defeated Wheeler in the first round 47-6, setting up a showdown on the road against first-seeded East Paulding. The Tigers played great on both sides of the ball to win 26-8. The Tigers faced Cartersville in the championship game and battled through a scoreless first half before losing a heartbreaker late in the fourth quarter, 14-12.

All season long the teams were encouraged by Woods to play for “each other, their school, the ‘Hammond Way’ and for the Dalton community.”

“My family has been part of Dalton football for 50 years, so I was thankful for the opportunity to help lead the new program at Hammond Creek, but this is so much bigger than one school and even this special group of players and coaches," Woods said. "This is about our town and the Big Red tradition that so many of us are proud to be part of."