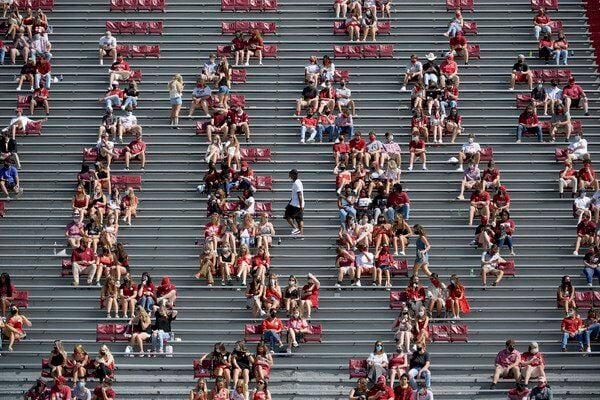 Arkansas students sit in socially distanced groups before a game against Georgia in Fayetteville, Arkansas, on Sept. 26. 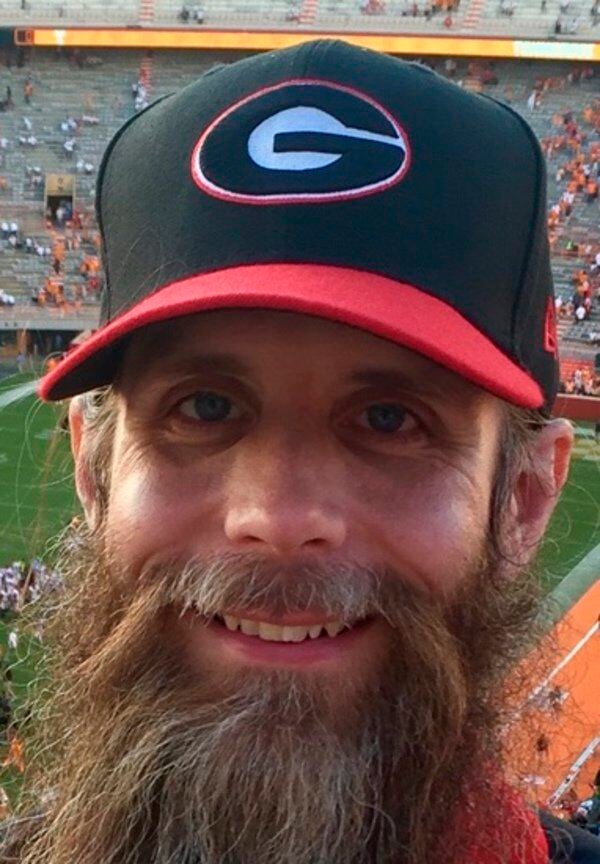 Arkansas students sit in socially distanced groups before a game against Georgia in Fayetteville, Arkansas, on Sept. 26.

FAYETTEVILLE, Ark. — The countdown to kickoff at Donald W. Reynolds Razorback Stadium was on last Saturday as Arkansas and Georgia were set to begin their pandemic-delayed football season in a little under an hour.

About a mile from the stadium, on a residential street that looked like anywhere in the U.S., a woman stood in front of a home waving a sign over her head: “Parking $20.” Although she was hawking the parking spaces diligently, so far there were no takers. Surely if this was a regular gameday in Hog Country so close to kickoff, cars would be lined up for such a convenient spot to park. And the homeowner would be in line for a nice payday.

Welcome to college football Saturdays in a COVID-19 world, where tailgating fans spread as far as the eye can see are a thing of the recent past and stadiums overflowing with boisterous crowds are nowhere to be found. It’s a different world of reduced stadium capacities where we’re encouraged to stay 6 feet apart, of required masks that muffle your cheers (or jeers), and of new rules that put tightly-held tailgating traditions on hold.

I was among the announced attendance of 16,500 at this past Saturday’s game, as No. 4 Georgia overcame a shaky first half to beat Arkansas 37-10. The experience was normal yet foreign; recognizable but eerily different; comforting and simultaneously stressful.

Making the trek through campus as kickoff inched closer, the dearth of people was the starkest evidence that this wasn’t a typical college football Saturday. Usual pregame traffic that snarled roads was nonexistent. Around a set of dorms only a handful of students were making their way toward the stadium, as the pregame music boomed from a distance. Like many other SEC universities, Arkansas banned tailgating and opened parking lots only two-and-a-half hours before kickoff in hopes of preventing crowds from gathering, thus limiting the virus’ spread. Those tactics were successful. Walking through the prime parking lots only steps from the stadium was like walking through a grocery store parking lot at midnight. A few groups of fans set up impromptu mini-tailgates next to their cars as they snacked and sipped on drinks. Gone were the tailgates that started shortly after the sun came up, and ended after the sun went down.

Getting into the stadium was painless. After winding through a long corral to encourage social distance, I scanned my mobile ticket at a kiosk (a strategy to reduce touch points) and entered the stadium with no wait.

What greeted me were sparse stadium corridors, closed concession stands and a general sense of emptiness (physical, not emotional). On my ascent to my seat in the upper level, I didn’t pass anyone on the ramps. At times I was concerned if that part of the stadium was even open. Once I sat down about 20 minutes before kickoff, I wondered if I was two hours early. The stadium was that desolate. There was plenty of space in the stands, as Arkansas did a solid job of spacing out blocks of six seats. At no point did I feel that I was too close to people outside of my group. Fans were required to wear masks, but many did not.

Once the game kicked off, football felt normal. I screamed in frustration when quarterback D’Wan Mathis ran out of bounds short of a first down on a third down scramble. I reflexively high-fived my friends when cornerback Eric Stokes returned an interception 30 yards for a touchdown. (Then I reached for my bottle of hand sanitizer.) Excited, flailing high-fives eventually turned to more controlled fist bumps as Georgia built its lead in the second half.

Due to the numbers game, the crowd never got loud, even with the help of artificial fan noise being pumped in through the speakers. No lines for concessions. No lines for the restroom. No people crawling over you to get to the aisle. No bottlenecked areas when leaving the stadium.

What a truly different world.

Tonight, I’ll be in Athens at Sanford Stadium for Georgia’s first home game of the 2020 season against the Auburn Tigers. Georgia has taken steps to stem the spread of COVID-19, such as banning traditional tailgating and limiting the stadium’s capacity of 92,746 to roughly 20%.

Georgia and Auburn will still play football as the teams have 124 times before in the “Deep South’s Oldest Rivalry.” But much of college football will be different — our tailgating routines, the number of fans in the stands, right down to the wallets of people peddling parking near the stadium.

Jamie Jones is the editor of the Daily Citizen-News.