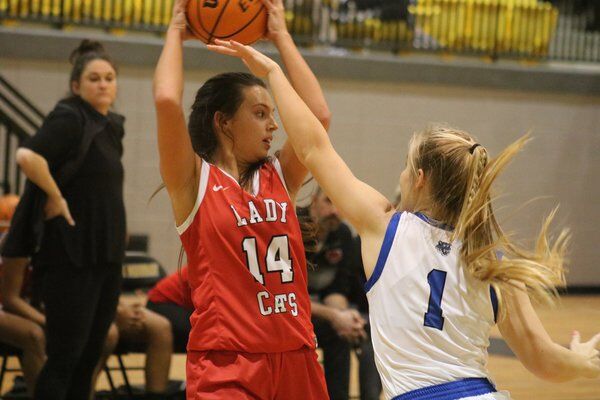 Dalton High School's Taylor Thompson keeps the ball away from a Ringgold defender Wednesday in the Mistletoe Madness Christmas tournament. 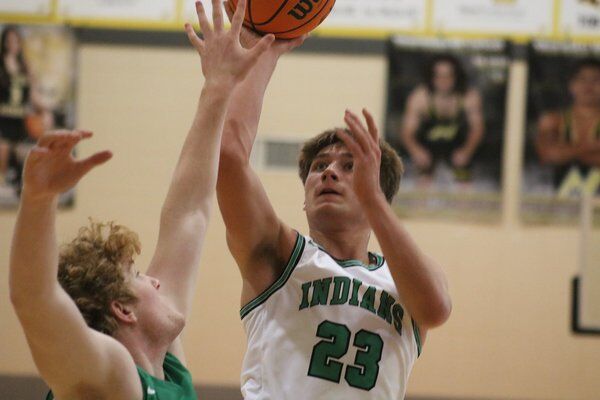 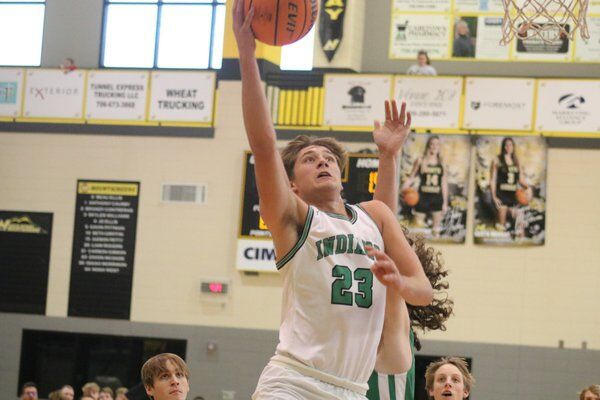 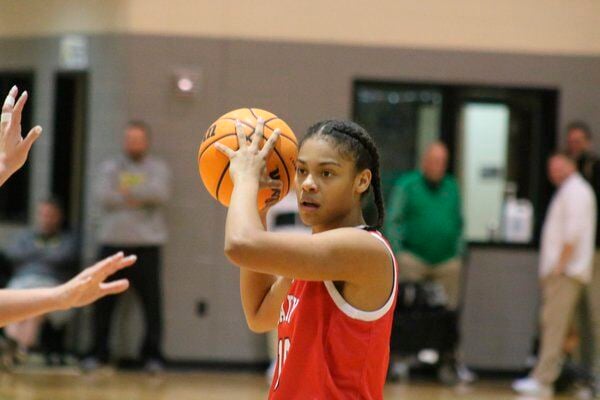 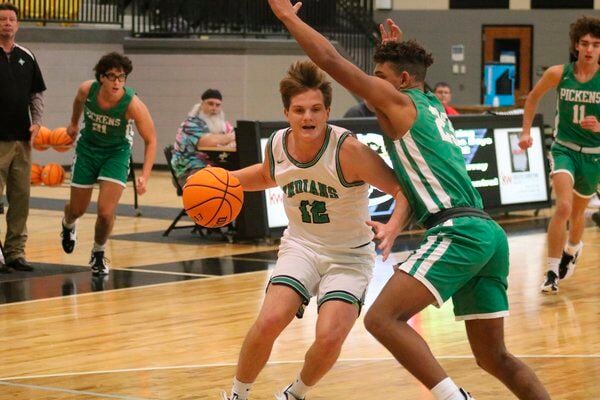 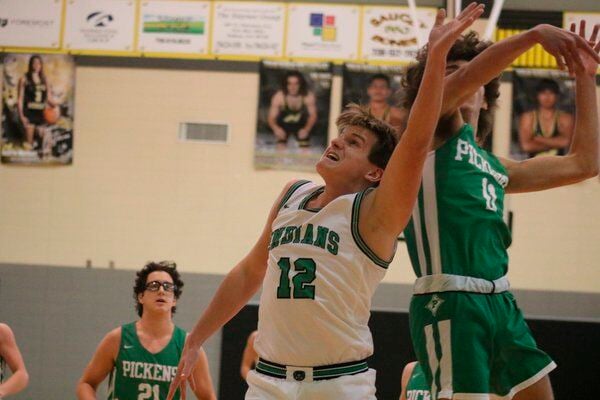 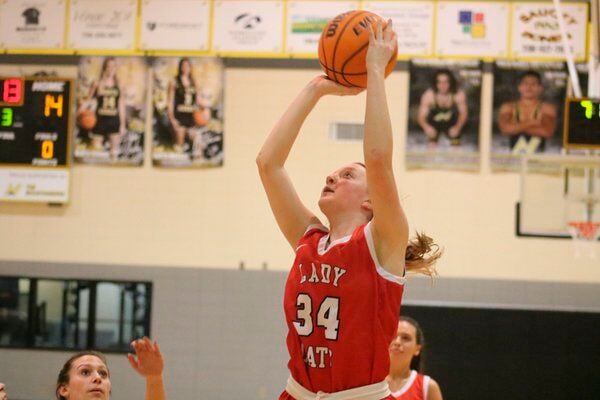 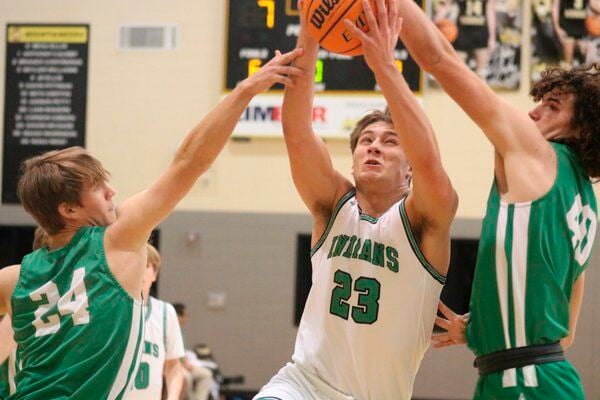 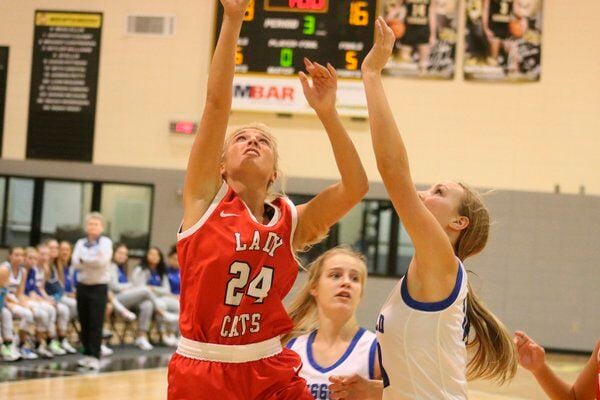 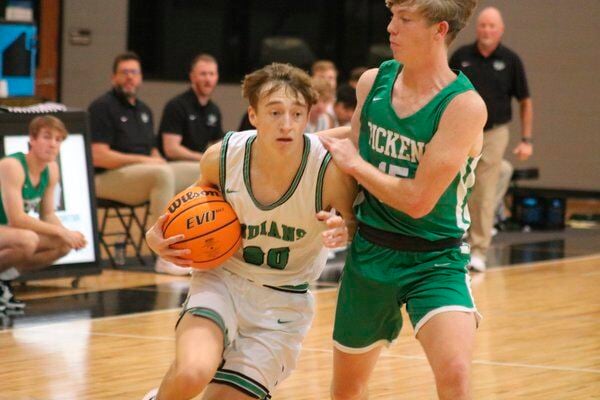 Murray County High School's Tad Stone tries to get by a Pickens defender Wednesday in the Mistletoe Madness Christmas tournament.

Dalton High School's Taylor Thompson keeps the ball away from a Ringgold defender Wednesday in the Mistletoe Madness Christmas tournament.

Murray County High School's Tad Stone tries to get by a Pickens defender Wednesday in the Mistletoe Madness Christmas tournament.

CHATSWORTH — After the lights were flipped off, the teams on the floor flipped a switch, too.

Dalton and Ringgold were playing in a defensive struggle through three-plus quarters of the finals of the girls Mistletoe Madness Christmas tournament Wednesday at North Murray High School.

Then, with 5:20 to go, the lights in the gym suddenly went out. After a brief delay, the teams resumed action in an arena lit only by the lighting above the walking concourse at the perimeter of the gym.

The semi-darkness didn't seem to hurt either team, as a flurry of scoring from both teams left Dalton with a 37-28 win and a championship in the eight-team Christmas tournament.

"I think we were both equipped to handle it. That's obviously not something you want to happen, but both teams handled it well," Dalton head coach Hannah Harris said.

Dalton (7-2) held a 24-18 lead when the lights went out. The Lady Catamounts had held Ringgold (10-3) to just eight total points since the first quarter.

After the lights came back on, Ringgold was lights out for the next few minutes.

The Tigers matched that two-quarter point total in three minutes, storming back to take a 27-26 lead with 1:54 to go. After the teams exchanged free throws to leave the game tied at 28, Gracie Ridley hit the go-ahead bucket that put the Lady Cats ahead for good. Ridley, Kinsley Skiffen, Kemara Washington and Jolie Wingfield also hit a few free throws as Dalton scored the game's last nine points with Ringgold fouling to try and extend the game.

Ridley led the Dalton scoring effort with 10, while Emma Hefner and Taylor Thompson both scored six.

"Defensively is an area that we've had to grow," Harris said. "For us to come out and defend like we did is incredible. We got a little frustrated not being able to score, but we stuck with it defensively."

Dalton earned the tournament win with three wins in the three days of play. A first round defeat of McMinn County Monday was followed by a win over Calhoun Tuesday, with the Lady Cats knocking off a team that had beaten them by 19 earlier in the season.

"I have seen us come together on the floor and grow as a team after that game," Harris said. "We've come pretty far since then."

Dalton next plays Jan. 4 at 6 p.m. against Douglas County.

An official champion wasn't determined between the six boys teams that competed at the Mistletoe Madness tournament at North Murray High School this week, but if one had, Murray County would be it.

The Indians (8-4) downed Pickens (5-7) 61-55 Wednesday to finish the three-day tournament undefeated. Murray was the only of the six boys teams that didn't lose a game in the pre-determined holiday slate.

Carson Weaver got the Indians going strong, and second-half shooting propelled them to the win over Pickens.

Weaver scored 14 points in the first quarter and 20 in the first half as Murray grabbed a 36-25 lead at the break. Murray scored the final 10 points of the half after Pickens had reeled off a 13-2 stretch of its own in the second quarter.

After Pickens closed the gap to 47-43 to start the fourth, a trio of fourth-quarter 3-pointers from Landon Bennett helped push Murray to the win.

The Mountaineers led 12-8 after the first, then scored 22 in the second to get out to a 34-13 advantage at halftime.

It was the first win in the event for North Murray, which fell to Southeast Whitfield Monday and Pickens Tuesday.

The Raiders stormed back from a 12-point lead in the fourth quarter but couldn't complete the comeback.

The Raiders finished 1-2 in the event, defeating North Murray but falling to Murray County and Ringgold.

North Murray, which won its first round game over Southeast Whitfield Monday before dropping to Ringgold and Calhoun, finished fourth.

The Lady Mountaineers will get a holiday break before suiting up next for a road game at Sonoraville at 6 p.m. on Jan. 4.

Murray County (9-3) picked up its first win in three days of play at the Mistletoe Madness tournament at North Murray with a 55-19 win over Southeast Whitfield (0-11).

After losing its opener to third-place Calhoun Monday and falling to McMinn County in the consolation bracket, the Lady Indians rebounded in a big way Wednesday, using the 55-19 win to claim seventh place in the tourney.

Southeast went winless in its three games in the tournament and finished eighth.

The teams' next game is a rematch at Southeast Whitfield at 6 p.m. on Dec. 30.

Virginia Mathis Wallace, age 91, of Dalton, went to be with the Lord on Thursday, January 13, 2022. She was a member of Pleasant Grove United Methodist Church as well as a member of the Pilot Club for many years. She worked at Crown Cotton Mills for ten years and retired from Blackstock Sale…

Leigh Hall, age 73 of Dalton, passed away Thursday, January 13, 2022 at Hamilton Medical Center surrounded by her loving family, after a courageous battle with lung cancer. She was preceded in death by her parents, Seth and Robbie Whittemore; and nephew, Seth Edgar. She was a loving wife, mo…