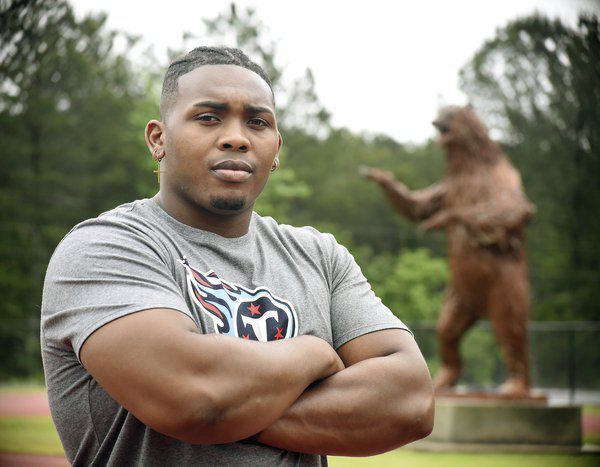 Isaiah Mack is pictured this past May before heading off to rookie mini-camp with the Tennessee Titans. 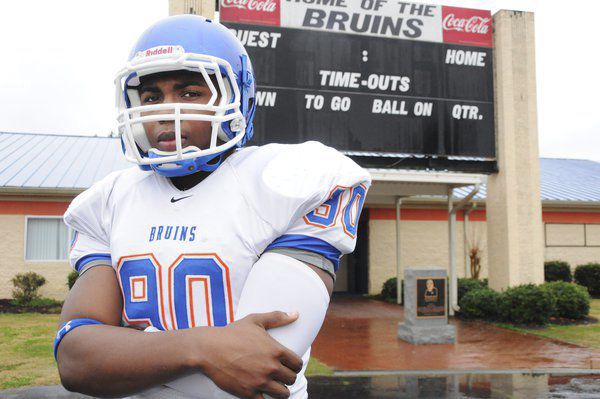 Isaiah Mack is pictured during his time with the Northwest Whitfield High School team.

Isaiah Mack is pictured this past May before heading off to rookie mini-camp with the Tennessee Titans.

Isaiah Mack is pictured during his time with the Northwest Whitfield High School team.

On Friday night, Isaiah Mack was simply a former Northwest Whitfield High School football player, watching his alma mater take on Dalton at Harmon Field and blending in with the crowd.

Mack was named to the Titans' official 53-man roster on Saturday as a defensive tackle, after all teams in the league had a deadline of 4 p.m. to finalize their rosters before the regular season.

Mack joined the Titans as an undrafted free agent when they signed him in late April. He made a name for himself in the preseason, making a fumble recovery in his first appearance and also recording a sack against the New England Patriots. He finished with nine tackles in his three games.

The likes of the Titans' coaching staff, a lot of hard work -- and a little bit of luck -- have now cemented his spot on the team.

Mack first learned the news when he was informed on Thursday he would not be active for the Titans' final preseason game against the Chicago Bears.

But, it wasn't bad news. He had made it.

"It was a surreal moment," Mack said. "All the older guys were huddled around me -- all the vets were clapping me up trying to welcome me to the team. It was a good moment."

Mack, a 2014 graduate of Northwest, finished his high school career and made his first move after graduation not far from home. Signing to the University of Tennessee at Chattanooga with only a few other offers, he grew physically, mentally and on the football field. By the time his career with the Mocs was over, Mack had been named the 2018 Southern Conference Defensive Player of the Year. He finished college as third-all time in tackles for loss at the school with 41 and fourth all-time in sacks with 21.

Mack reported to Nashville for the first time in early May for the Titans' three-day rookie mini-camp. He then went through the entire summer program with the team.

The chances of Mack making an NFL team were already low as an undrafted free agent. Some reports say about eight in every 10,000 high school players will have their names called during the draft, which wasn't even the case for him. After moving so close to home for college, the chances of him making an NFL team also relatively close to his hometown of Tunnel Hill, an approximate 150-mile trip to Nashville, were even smaller. The only organization that would garner a shorter travel time is the Atlanta Falcons.

"God works in mysterious ways," Mack said. "Being so close to home, it's crazy how things happen."

While the entire sentiment is pure joy for Mack, there's a lot more to go around for those who know him. His four-year high school coach Josh Robinson, who is still with Northwest and coached in Friday's game against Dalton, was beaming with emotion just thinking about how far Mack has come.

"The kid has always found a way," Robinson said. "I know people say that, but what he's got is an unbelievably special thing. I remember seeing him in middle school thinking that he couldn't play because he was this dumpy little kid. But, he was always around the ball and it's been like that forever. It took me about a half a practice to realize that he was going to start for us, of course not knowing that it would turn into what it is now.

"All my kids are important -- all my players. But this is something that is not easy."

Robinson said he was fortunate enough to watch Mack multiple times when he played as a Moc. Thinking about the first time he will see him wearing an NFL jersey in person made him even more emotional. Robinson and Mack's defensive line coach, Lance Miner, are the only coaches still at Northwest from his days as a Bruin.

"It will be awesome," Robinson said as he reflected. "I don't even care if he plays two or three plays, but I'll be surprised if he doesn't play more than that. It's really, really special for us and our football program."

Robinson's pride is an example not just as his former coach, but the entire community. The last time the area had a longtime NFL player was Dalton High's Jim Arnold.

Arnold played 12 seasons in the NFL, earning Pro Bowl and All-Pro honors in 1987 to 1988 with the Detroit Lions. He set a Lions record with 97 punts in 1988, one season after having a franchise-best net average of 39.6 yards, while his 536 punts still top the team's career list. He averaged 42.7 yards and never had a punt blocked while with the Lions. The fifth-round pick out of Vanderbilt in 1983 also played for Kansas City and Miami.

"He stayed the course and did what he was supposed to," Robinson said of Mack defying the odds. "He didn't transfer anywhere and did things the 'right' way. Look where it has gotten him, and that's because it taught him to fight."

With the backing of his family, including his mother, Sequoyah Mack, grandmother and former coaches Mack said he's done his best to soak it all in -- at one time not knowing if he'd ever get the chance to play again.

"The one thing that I kept thinking in my mind is that I finally did it," he said of his run in the preseason. "I got to live a dream that thousands of kids dream of, and I'm going to keep riding it until I can't ride it anymore."

While Mack has officially made the team, he joins a defensive line listed third in his position on the Titans' unofficial depth chart behind four-time Pro Bowl player Jurrell Casey at the top spot. His playing time could change week-by-week and could be altered when the Titans return their first-round draft pick Jeffery Simmons out of Mississippi State who tore his ACL in the offseason.

Simmons was placed on the team's injured list at the beginning of training camp and remained there as a reserve when the official roster was announced on Saturday, meaning he will not be allowed to practice for the first six weeks of the season.

The Titans open their regular season at 1 p.m. on Sunday in Cleveland against the Browns.

"I'm ready to play when and where they need me," Mack said. "No matter what quarter, it's like a whole new job interview now."

The sheer fact that nothing is truly set in stone for Mack is something that Robinson said is an almost perfect end to the story of his long journey.

"I would love for him to sign a $10 million contract with guaranteed money," he said. "But this almost suits him that he needs to fight for his spot for an entire year."

When Mack looks back on his own accomplishments, he said the entire experience has been nothing like he could have ever imagined. The most surreal part, however, is the attention he's getting on social media.

"It's surreal to see your name on the jersey in the locker room and things like that, but no one expects a kid from Dalton to be on the big screen," he said. "Seeing all the videos from your family, I don't get to see all that obviously because I'm on the sidelines.

"I'm really excited, but so are they. They are just so proud and are probably a little bit more proud than I am of myself. It makes me feel good. I'm just happy that I can make people proud."

If anything, Mack wants people to know he's the same kid he was back then.

"A lot of people have been telling my that I'm a bigger inspiration than I realize just because I've put in the work," he said. "But, I'm still Isaiah Mack. I can still go to Wal-Mart.

"I can still go to a high school football game and feel like myself. I just play on Sunday now."