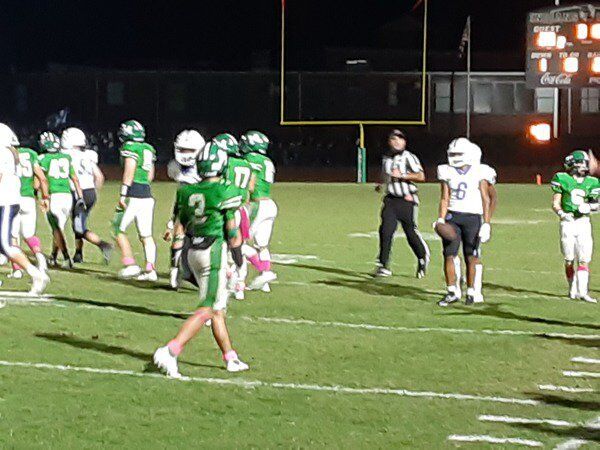 Ringgold's Peyton Williams (holding ball) heads back to the huddle after a carry Friday against Murray County High School. Williams accounted for one of the Tigers handful of rushing touchdowns in a 34-13 win in Chatsworth. 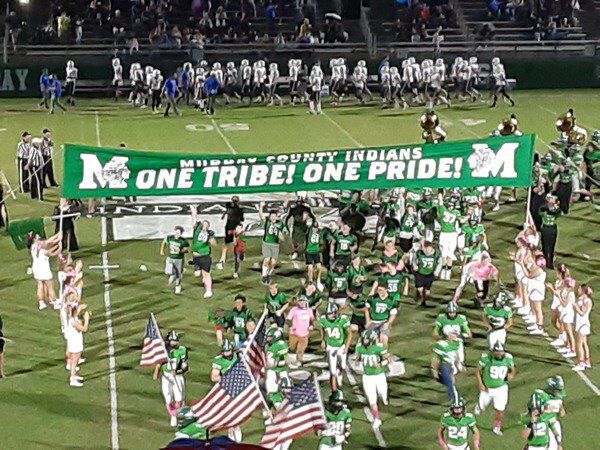 Murray County High School charges onto the field to open Friday's game against Ringgold; the visiting Tigers defeated the Indians, 34-13.

Ringgold's Peyton Williams (holding ball) heads back to the huddle after a carry Friday against Murray County High School. Williams accounted for one of the Tigers handful of rushing touchdowns in a 34-13 win in Chatsworth.

Murray County High School charges onto the field to open Friday's game against Ringgold; the visiting Tigers defeated the Indians, 34-13.

The Mountaineers exchanged rapid-fire touchdowns with the Phoenix in the first half, but the Mountaineer offense kept climbing in the second while the defense shut Sonoraville out.

Sonoraville struck first, returning the opening kickoff for a touchdown, but North Murray quarterback Seth Griffin threw a 75-yard touchdown pass to Cade Petty less than a minute of game time later. North Murray's Dante Tidwell scored on an eight-yard rushing touchdown before Sonoraville answered to make the score 14-14 at the end of one quarter.

The Phoenix added another touchdown early in the second quarter, but that would be their last score. Griffin added a one-yard touchdown run, then hit Tidwell with a 55-yarder before halftime to take a 27-20 lead.

Griffin added two more one-yard runs in the second half, the second set up by a 60-yard pass to Tidwell.

The win gives the Mountaineers a 2-0 start in Region 6-3A. It's the ninth straight region win dating back to 2018 for North Murray, which had an unblemished region record last season on their way to a region championship.

The Mountaineers face a major region test next Friday when they host Rockmart on Friday at 7:30 p.m. The former Class 2A power, which moved into Region 6-3A for this season, has outscored their opponents 110-13 in two region wins.

Dalton's Maurice Howard started the game with a 75-yard score, and a Catamount field goal made the score 9-0 in the first quarter.

Then, South Paulding got their offense going.

The Spartans scored three first-half touchdowns and led Dalton 20-9 at the halftime break.

That score held through most of the second half before a Dalton touchdown cut the deficit with under a minute remaining in the game. Catamount quarterback Ashton Blackwell found Karim Page for a 78-yard touchdown with 52 seconds left.

With the loss, the Catamounts fell to 0-2 in Region 5-6A play. Dalton also dropped their region opener against Carrollton last Friday.

The Catamounts finally return home Friday to play at Harmon Field, when they host Rome at 7:30 p.m. This past Friday's game was the third straight road game for Dalton in a stretch that also included two straight bye weeks. The Catamounts haven't played at home since Sept. 4.

The Raiders picked up a 21-7 win over Armuchee last Friday, their first Oct. 5, 2018, but faced some stiffer competition in Friday night's loss.

Gordon Lee piled up 27 points in the first quarter, then added 14 more in the second to lead 41-0 at halftime. The Trojans added another score in the third and cruised for a 48-0 victory.

Gordon Lee, a Class A school, is 5-0 with wins over Class 2A, 3A and 4A teams under their belt, including Class 4A Southeast.

The Raiders are at home to face Trion Friday at 7:30 p.m. The Indians (1-4, 0-3 in Region 6-3A) struck first. After drawing the Tigers offsides on a fourth-and-short at the Ringgold 41 for a free first down, quarterback Kaleb Jones spotted single coverage on tall target Brandon Nuckolls a few plays later. Jones pump faked, then tossed it up to Nuckolls, and the senior hauled it in for a 24-yard touchdown.