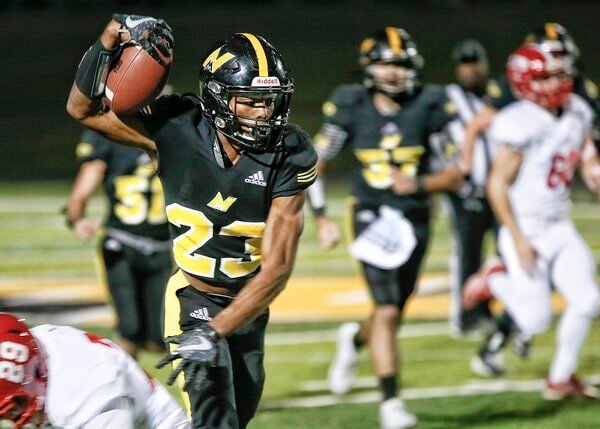 In addition to his 19-yard rushing touchdown, North Murray High School's D'Ante Tidwell also made an acrobatic reception to set up a field goal and recovered a fumble Friday in his team's 33-13 victory over LFO. 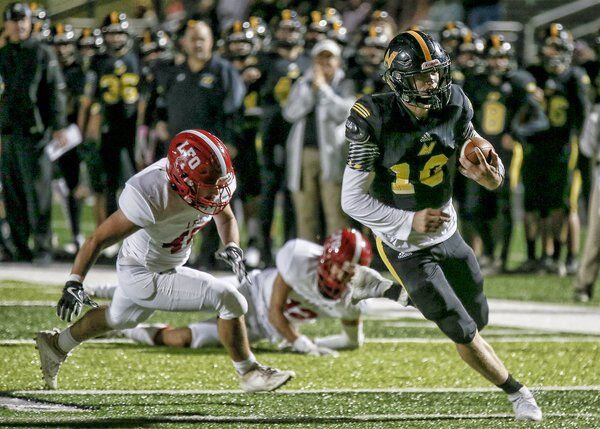 In addition to his 19-yard rushing touchdown, North Murray High School's D'Ante Tidwell also made an acrobatic reception to set up a field goal and recovered a fumble Friday in his team's 33-13 victory over LFO.

CHATSWORTH -- The night before Halloween, North Murray High School didn't require many tricks to procure the treat of a 33-13 victory over Lakeview-Fort Oglethorpe.

A trio of fumbles by the Warriors proved deleterious to the road team's cause, including one on the game's opening possession that led to a North Murray touchdown and another when the visitors were inside North Murray's 1 yard line. Will Carroll's quarterback sneak attempt on 1st and goal resulted in a fumble, and Devin Hunte pounced on the ball in the end zone; North Murray then drove 80 yards -- D'Ante Tidwell ripped off a 33-yard carry to move the Mountaineers to the 10 of LFO, and Seth Griffin threw a 5-yard touchdown pass to Cade Petty -- to double the home side's lead to 14-0 with 42 seconds remaining in the opening quarter.

"That fumble was a big play (and an example) of our 'no-quit mentality,' making plays wherever you are on the field," said North Murray's head coach, Preston Poag. "We hadn't been getting many turnovers this year, but we worked all week on getting all 11 (defenders) to the ball, and our defense made some big plays tonight."

That started with the game's opening possession, as the Mountaineers stripped Jacob Brown of the ball, and Tidwell recovered it at LFO's 43. The Mountaineers, who shut out LFO last season 31-0, converted a 4th-and-1 at the 34 with a sneak by Griffin. On the next play, Petty galloped for 18 yards, and on the next play, Griffin kept the ball on an option for a 14-yard touchdown run.

Early in the second quarter, North Murray enjoyed excellent field position following a poor LFO punt, and Tidwell finished off the 35-yard drive with a 19-yard touchdown run to extend the margin to three touchdowns. Then, a snap over the LFO punter's head resulted in a safety and gave the Mountaineers their largest lead of the night at 23-0.

Brown, however, atoned for his earlier fumble, with a 46-yard touchdown rush that put the Warriors on the board with 4:22 remaining until the break.

Brown "is a good player who can really run and made some big plays," Poag said. "They were big up front and blew us off the ball some."

With less than 20 seconds until the break, Tidwell made an acrobatic, astounding catch with a defender draped all over him for a 44 yard gain that set up an Owen Hannah 36-yard field goal that pushed North Murray's lead to 19 at halftime.

"I had dropped one before that, (so) I just concentrated on the ball, and everything slowed down, like I was in slow motion," Tidwell said. The ball "was like a baby in my hand."

The Mountaineers (4-2 overall, 4-1 in Region 6-3A) encroached into LFO territory on the second half's opening drive, but came up short on a fourth down attempt. On the ensuing possession, Brown busted free up the gut for his second touchdown of the game, a 39-yarder that cut the deficit to 26-13; the Warriors succeeded on a two-point conversion, but it was negated by a holding penalty, and they then missed the extra point attempt.

The Warriors (1-6 overall, 1-4 in Region 6-3A) failed on an onside kick attempt, ceding the ball to the Mountaineers on North Murray's 48. The two-play drive was all Petty, as he required only a couple of carries to reach the end zone and put the home team ahead 33-13 with 7:18 left in the third quarter.

That "was a huge drive," Petty said. Credit to "the blockers up front and on the outside, because they turn 15-yard gains into touchdowns."

Poag knows his team needs to continue to improve the rest of the season.

"We should have scored more points tonight," but missed those chances due to drops and penalties, he said. "We have got to stop holding, because we had too many holding penalties."

Tidwell is bullish on his team's progress and future outlook.

If "we just clean up a few things on offense, we'll be fine," he said. "Every game, we're getting better."