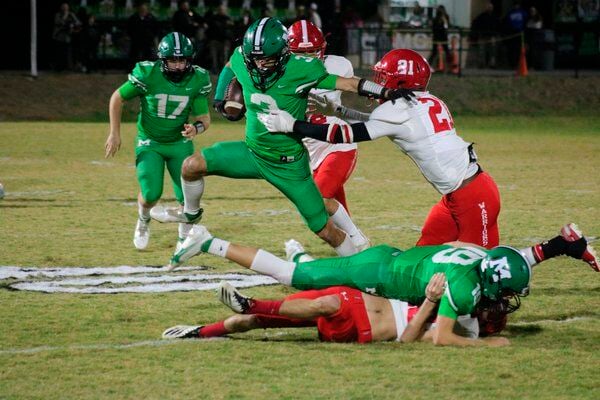 Murray County High School's Davis Redwine fends off a defender while jumping over a teammate against Lakeview-Fort Oglethorpe Friday night. 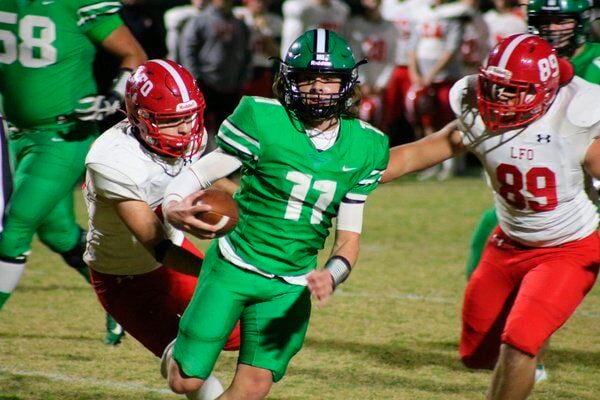 Murray County High School's Davis Redwine fends off a defender while jumping over a teammate against Lakeview-Fort Oglethorpe Friday night.

CHATSWORTH -- Murray County High School gave up two recoveries of an onside kick to Lakeview-Fort Oglethorpe Friday night, but the Indians fell on the one that mattered most.

LFO (1-8, 1-6 Region 6-3A) scored with just 50 seconds left to cut the Murray lead to just three. After an LFO recovery was negated by an offsides penalty, Murray County's Carson Voiles gathered the ball and fell to the ground, holding on tight to secure the ball and the Murray County 38-35 home win in the Indians' season finale.

"We had a lot of guts and a lot of heart. I'm glad we got to send these seniors out with a win," Murray County head coach Chad Brewer said.

On Friday the 13th, both teams faced plenty of bad luck. There were three successful onside kick recoveries, six defensive fumble recoveries and an interception.

Murray County recovered four of those fumbles and tallied the interception, giving them the edge they needed.

LFO scored first with a 5-yard Jacob Brown touchdown, but Indian quarterback Kaleb Jones burst through the line into the clear and carried a late pursuer on a 51-yard score as the Indians tied the game at 7.

Jones, a senior playing in his final game for the Indians, rushed for 168 yards and two scores while passing for 88 and another touchdown.

"It's awesome just to be able to finish with a win," Jones said. 'It means a heck of a lot to win. We all had each others' backs."

Brown, however, had a big game on the ground on the other side of the ball.

His second touchdown, along with the extra point, put LFO up 14-7 in the second quarter. Brown totaled 219 yards and five touchdowns.

Jones hit Leonard for an 11-yard touchdown to knot the game back up, then scored his second rushing touchdown from 12 yards as Murray County took a 22-14 lead.

"He played every snap of this football game on both sides of the ball and had a great night," Brewer said of Jones.

Brown quickly shrunk that deficit to 22-20 with a 67-yard score just before half.

Taylor Carrell rushed in from 17 yards in the third, then, after a goal-line stand from Murray County, Elber Romero booted a 32-yard field goal to put Murray County up 32-20 in the fourth.

Brown added another, but the Indians put together a 10-play, 90-yard drive, capped by a Voiles score, that left LFO with just over two minutes to come back from a 38-27 deficit.

"Five or six months ago, we didn't even know whether we were going to get to play football," Brewer said, referring to the COVID-19 pandemic. "I hope our players never forget this season. I'd like to have a couple of those games back, but we got to finish strong."

Mr. Wade Ervin Ferguson, age 92, entered into rest, Monday November 23, 2020 at the local hospital. Wade was born July 27, 1928 in Holcomb, MS, the son of the late Bill and Hazel Childs Ferguson. He was also preceded in death by his brother-in-law, Bill Luttrell and grand-daughter, Krista Ne…