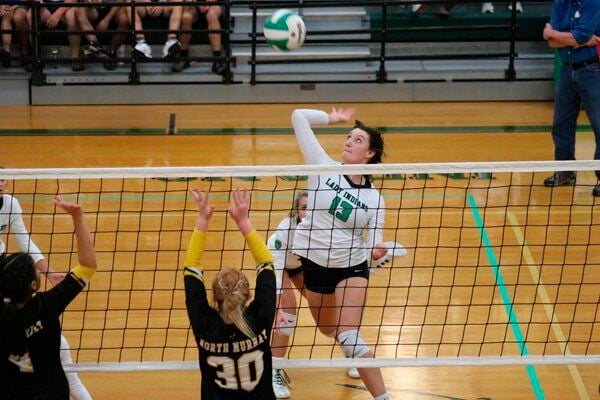 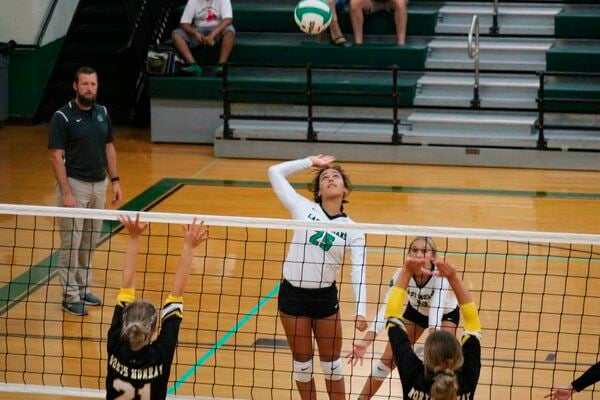 Murray County High School's Skyler Mahoney waits for the ball to come down so she can spike it for a point against North Murray on Tuesday. 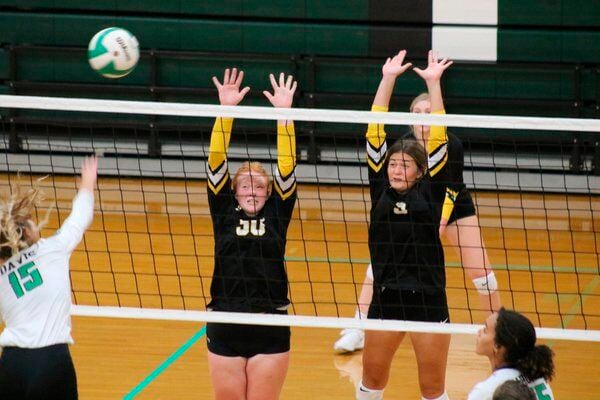 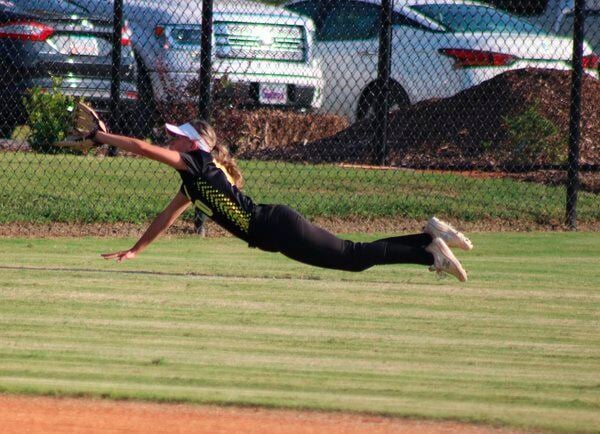 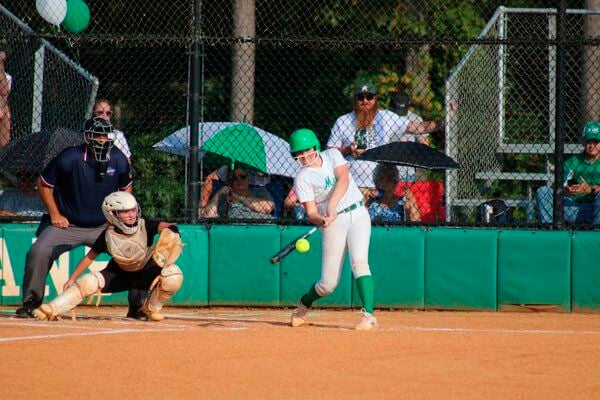 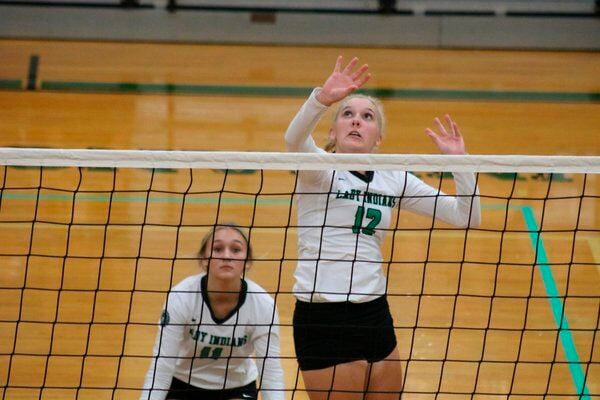 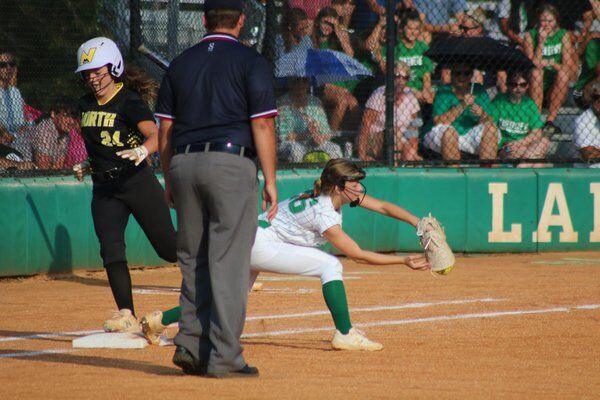 Murray County High School first baseman Abby Curtis stretches to make a catch to get an out against North Murray's Cameron Longley on Tuesday. 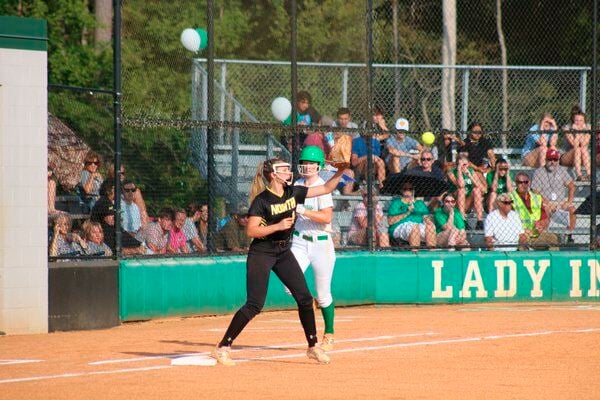 North Murray High School's Abby Young makes the catch at first base to get a Murray County runner out on Tuesday. 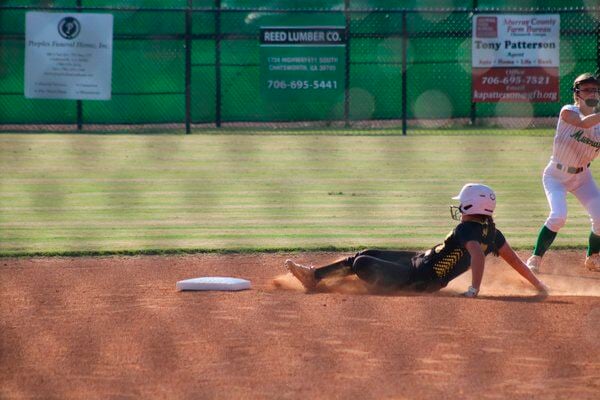 Murray County High School's Skyler Mahoney waits for the ball to come down so she can spike it for a point against North Murray on Tuesday.

Murray County High School first baseman Abby Curtis stretches to make a catch to get an out against North Murray's Cameron Longley on Tuesday.

North Murray High School's Abby Young makes the catch at first base to get a Murray County runner out on Tuesday.

The Lady Indians came away with a victory in both competitions.

The Murray softball team squeaked by North Murray 6-5 at the Lady Indians' field, while, across Old Dalton Ellijay Road at the high school, the Lady Indian volleyball squad was gearing up for a dominating, two-set win over their rivals.

On the softball field, North Murray (5-13-1) struck first in the top of the first inning, but a two-run homer by Kylie Usrey in the bottom half of the first frame put Murray County (5-9) ahead for good.

Murray led 5-1 after two innings and 6-3 after five frames. North Murray managed two runs in the top of the seventh to give the Lady Indians a scare, but couldn't come any closer than 6-5.

Charlsey Richards also homered for Murray, blasting a solo shot in the fifth. North Murray's Abby Young also belted one over the fence, a two-run shot in the third inning that kept the Lady Mountaineers close.

Murray's Alyssa Usrey was 3-for-3 with an RBI double. Lady Mountaineer Janna Baggett was 3-for-4 with a double and three RBIs.

Murray next host Pepperell Thursday at 5 p.m., and North Murray is back home to play Lakeview-Fort Oglethorpe Thursday at 5:30.

While the softball game was wrapping up, both the Murray County (14-3) and North Murray (3-8) volleyball squads put the finishing touches on victories over LFO (5-14).

To close out the tri-match, the two county rivals squared off.

Murray County got out to a swift lead in the first set, opening 9-2, and kept a healthy advantage despite a few North Murray runs. The Lady Indians took the first set 25-15.

In the second, it was the Lady Mountaineers' turn to get an early lead. An energized squad took the first three points of the set, but couldn't keep pace with the home team from there.

Murray County outscored North Murray 25-7 the rest of the way to a 25-10 set win, peppering several serves that came in too hard to handle. Mary Elizabeth Helms delivered a few of those on an extended service stretch.

The Lady Indians play in a tri-match at Adairsville on Thursday, while North Murray hosts a Thursday tri-match with Sonoraville and Coahulla Creek.

The Lady Colts scored five in the first inning and six runs in the fourth, which would be their last at bat because of the mercy rule.

Lexi Dunn was 3-for-3 with a double and four RBIs to lead Coahulla Creek. Steahl Smith pitched all five innings, allowing just two hits and striking out seven. Smith also had a double and an RBI, while Emily Wood was 1-for-2 with two RBIs.

In game one, Pickens held the Lady Raiders without a hit in a 16-0 shutout.

In the second contest. the Southeast bats fared a little better, driving in two runs on three hits, but the Lady Raiders still couldn't slow down Pickens on the way to a 25-2 defeat.

Katie Bramblett, Liberty Franks and Avery Skyles got the hits for Southeast, which plays at North Murray on Monday at 5:30 p.m.

Searany De La Cerda had 18 digs in the two matches for Dalton. Ahdayshia Johnson had five aces and five kills.

Dalton travels to Southeast to play the Lady Raiders and Gilmer on Thursday.

Coahulla Creek continues area play Thursday in a tri-match at North Murray against the Lady Mountaineers and Sonoraville.

Northwest travels to Pickens on Tuesday for a tri-match with Pickens and Ridgeland.

To submit scores and results for nightly roundups, emailsports@dailycitizen.news or call (706) 272-7742.