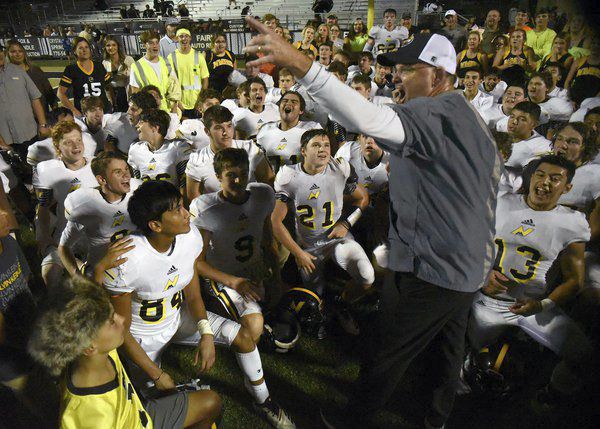 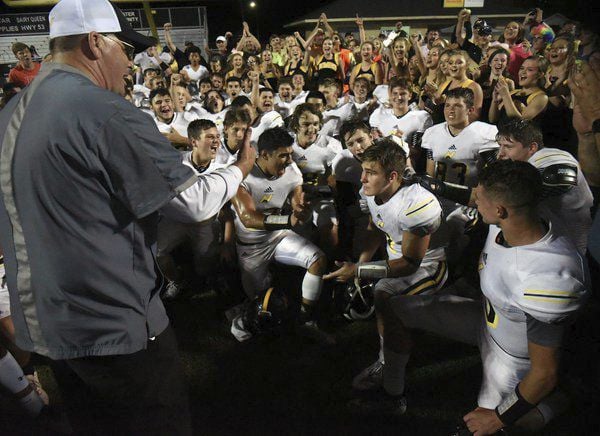 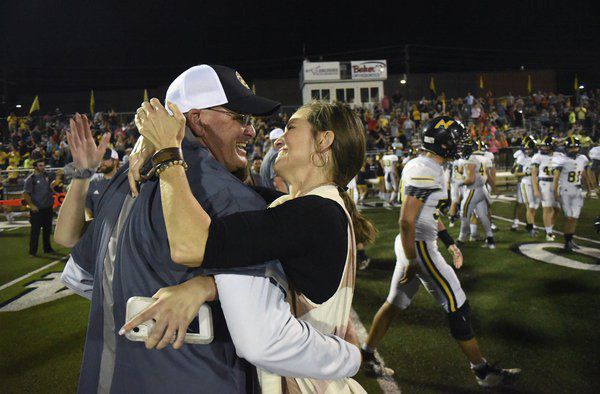 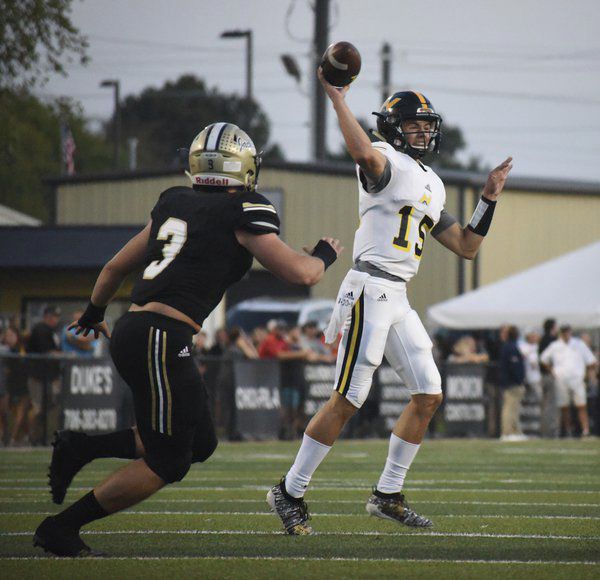 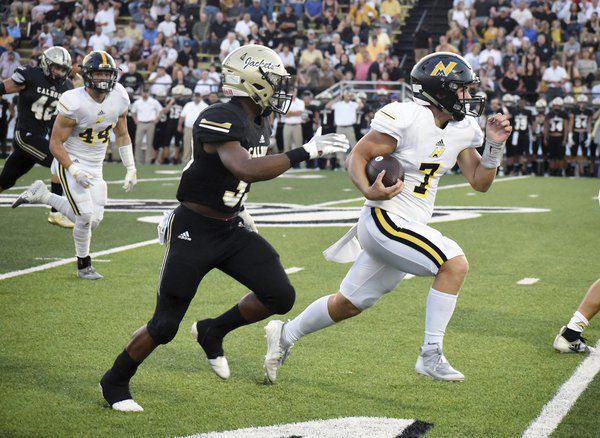 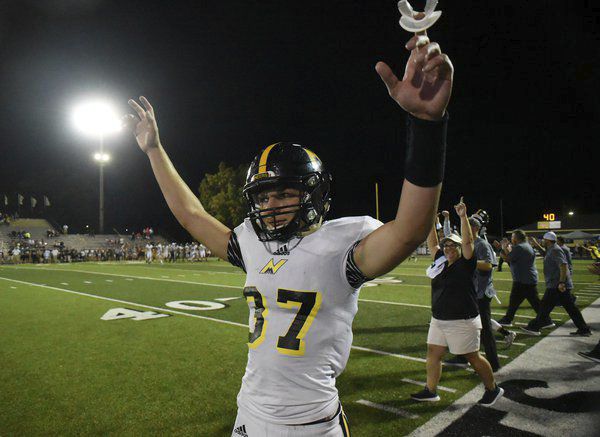 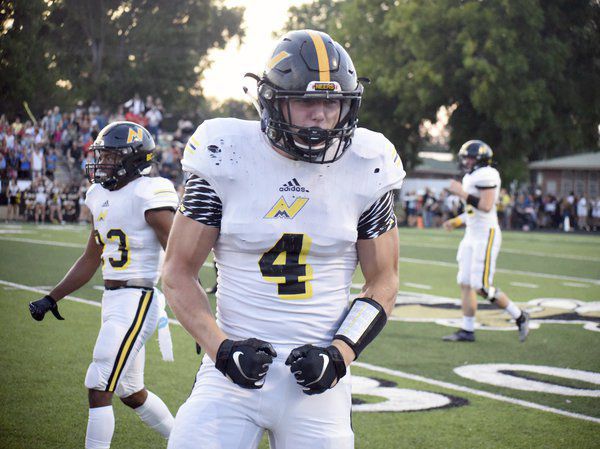 CHATSWORTH -- North Murray High School's Hayden Hulett wasn't around to hear about the last time Calhoun lost a region football game before last week. In fact, the senior was born on Oct. 26 -- exactly one week after the Yellow Jackets' 14-7 loss to Darlington in 2001.

By the time Hulett made his entrance into the world on that Friday nearly 18 years ago, Calhoun had already gone back to its winning ways. The team wouldn't drop a region game in its next 139 tries, going 17 straight seasons with an unblemished region-record.

Hulett's previous time playing on Calhoun's field didn't end so well. When the Mountaineers traveled to the powerhouse team during his sophomore year, a team that has won three state championships since he was born, Hulett took a monstrous hit on the opening kickoff that left him with a broken jaw. A seven-hour surgery, 13 screws and two years later, Hulett picked the right time to have the best game of his career.

North Murray, with the help of Hulett and his teammates, defeated Calhoun last Friday, 31-7. The streak is now over, and the Mountaineers are in command of their fate as they seek the first region title for the football program in school history.

Knowing it could happen

North Murray coach Preston Poag said he could hear a pin drop on the school bus that carried the Mountaineers to Calhoun. He said, when asked last Friday, he had to think extra hard about who the team's opponent was for this week.

That's just how focused they were.

"I just thought to myself, 'Man, it might be going down tonight,'" Poag said of the atmosphere on the bus ride. "A lot of the older ones in the locker room didn't say much. They just had their heads straight and focused."

On the Mountaineers' first play on defense, Hulett, a linebacker and wide receiver, had a much different outcome than two years ago.

He picked off a Calhoun pass.

"I just read how the guard pulled and I knew it was coming," Hulett said. "I sat on it and made the play. I don't know -- it was just so surreal."

The play established a tone and set up a field goal from Owen Hannah to give North Murray an early 3-0 lead. With a short scoring run from quarterback Ladd McConkey, the Mountaineers had a 10-7 lead at halftime.

Hulett was in on the action again when he caught a 4-yard touchdown pass from McConkey with a few minutes remaining in the third quarter.

"That's the moment when I thought we could win that thing," Poag said. "But you never know. In the past they've got us on the big plays."

Poag wasn't going to settle for just squeezing by. On fourth-and-inches after the fumble recovery, he decided to go for it.

"Everyone thought we were going to kick a field goal, but we had to play to win," he said. "We hit Hulett on a pass. When you play Calhoun, you need more than field goals, and it worked out. The kids executed the play and he was wide open."

The Mountaineers sealed the win as they continued the drive and scored on a Noah Lunsford run to take a 24-7 lead.

North Murray scored once more before the final whistle.

On Calhoun's last attempt to get anything going, a long third-down pass was intercepted by Chaisen Buckner for the Mountaineers' fourth turnover of the night. He returned it down to the 1-yard line and Lunsford got the pitch again for the final score.

The deafening defense was something Buckner, a Naval Academy commit who finished with 11 tackles and the pick, said didn't shock him.

"That's how we've been taught the past four years, and it's finally coming to fruition," Buckner said.

Keeping cool in a cool way

In the moments just following the win, Poag said his players kept their composure. After holding a 10-0 lead over Calhoun at halftime last season and coming away with a loss, he said the Mountaineers didn't pull off the upset overnight.

"It was a great atmosphere, don't get me wrong," he said. "But we told them when we win we weren't going to act like it was the Super Bowl, because we expected to win.

"It's been a process. All that stuff helped us the other night. The kids knew that we better play great in the last two quarters especially. The experience is what helped us -- to have the older guys who were there and knew what to expect."

After something so momentous, there was one more order of business that just felt right.

The idea came from defensive coordinator Bill Mitchell to give a game ball, something that Poag, in his fourth year at North Murray, had never done.

The recipient? Hulett, as he finished the game with 15 tackles, his touchdown reception, his interception and a fumble recovery.

"It was just the way he played all night," Mitchell said. "I saw him make plays on offense. He set the tone on defense with the interception.

"It was lights out. I mean, the last time he was there, it was a bad situation. There is no one more deserving than Hayden. He got the game ball because he played the best of anybody on both sides of the ball."

Hulett said when he realized what was happening after the game, he didn't know what to think.

"We all took a knee and he gave me the ball," he said. "That was the best game I've ever played. It was a special thing, especially coming from coach Poag, knowing he doesn't really ever do that kind of stuff.

"I don't even remember what he said. I was just so excited that we won."

With the win, the Mountaineers (3-1, 2-0 in Region 6-3A) now have a target on their backs. The region title is theirs if they win out, and their next test is tonight as they host Adairsville.

"We need to take it week by week," said senior linebacker Dylan Flood, who also finished last Friday's win with 15 tackles. "We need to focus on every single play."

For Poag, this is exactly where he wanted his players to be since taking over the program.

"I told the kids that this team will be talked about when they are my age," he said. "It's something special. They've earned it, though. To beat Calhoun, you have to go take it from them.

"This does a lot for us. We've been telling them that it was time to beat a really good team, because we've been close. Now we realize that we are in the driver's seat and people are going to be wanting to take us down. We better be ready each week."

Coming off another six-touchdown performance, Harrison will attempt to contain Dalton's Jahmyr Gibbs in another region game for both teams.

Gibbs, a senior Georgia Tech commit, has 23 touchdowns through four games, one on a special teams 97-yard kickoff return. Last week against Creekview, Gibbs surpassed 1,000 yards rushing for the season as he led Dalton to its first 4-0 start since 2016.

Harrison is also undefeated as the Hoyas defeated Sprayberry last week, 42-7. They have outscored their opponents this season by an average of 35 points.

Southeast Whitfield hosts LaFayette in a region-opening game for both teams.

The Raiders fell to Cedartown last week, 57-14, with both scores coming from quarterback Adam Sowder, one on a run and one on a pass to Colter Long.

LaFayette is coming off a bye after falling to Christian Heritage on Sept. 13, 20-7.

The Indians defeated Coahulla Creek last week, 27-7. Highlighted in the win was a 50-yard school record-tying field goal from Elber Romero. He finished with two field goals, while quarterback Kaleb Jones ran in two touchdowns and Carson Voiles ran in another.

Sonoraville had a bye last week after dropping its first region game of the season to Calhoun on Sept. 13, 17-7.