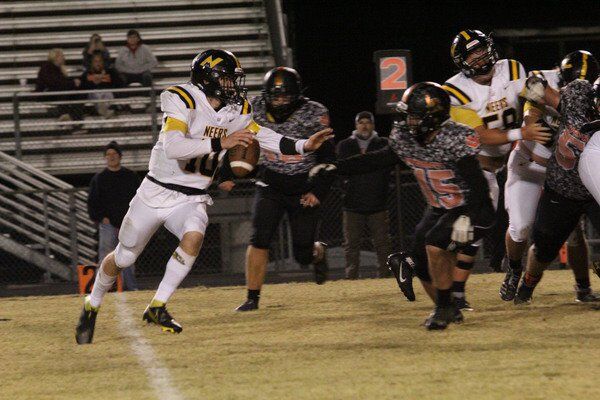 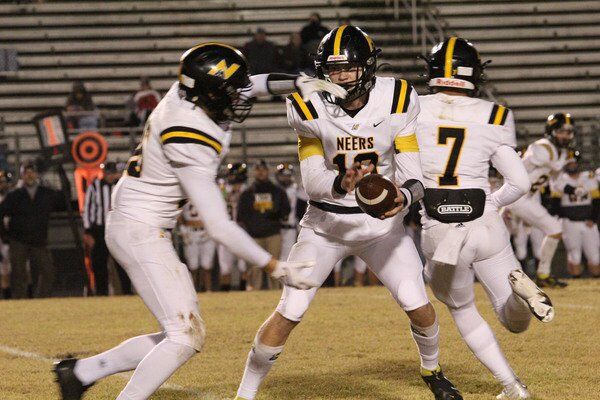 LAFAYETTE — There was all sorts of interesting math involved in the regular-season finale between North Murray and LaFayette on Friday night.

A win of five points or greater would give the Ramblers the point differential tiebreaker and the head-to-head tiebreaker over the Mountaineers and would send them to the playoffs for the second straight season.

Meanwhile, a LaFayette win by four points or fewer would keep North Murray at the top of the list in the point differential tiebreaker and give the Mountaineers the fourth and final playoff spot from Region 6-AAA.

Or North Murray could simply win the game outright to secure a playoff spot. That's exactly what they did. North Murray (7-3) opens the playoffs Friday at top-ranked Monroe Area (10-0), the Region 8 champion.

Despite a gutsy second-half effort by LaFayette, North Murray was able to get ahead and stay just ahead as they stamped their ticket to the state tournament with a hard-fought 30-21 win at Jack King Stadium.

Both offenses had trouble getting much of anything going in the first half.

LaFayette came up short on a 53-yard field goal attempt on its initial possession and the only score of the first half came with 5:48 left before halftime as Ethan Dempsey capped a 10-play, 86-yard drive with an 11-yard run. A failed conversion pass kept the score at 6-0 and that's the way it would stay going into intermission.

The visitors got the ball to begin the third quarter and immediately moved downfield on the arm of Griffin. He connected with Skyler Williams for 20 yards and Jadyn Rice for 40 before rolling right and throwing back to the left to hit Dempsey for a 21-yard score. Owen Hannah's point-after increased the lead to 13-0 with 9:34 left in the period.

But a failed onside kick attempt would set up the Ramblers in great field position at the 50. Ross Martin ripped off a 22-yard run and quarterback Jaylon Ramsey, who got the start as Zach Barrett was unable to play due to last week's injury against Rockmart, faked a handoff and squeezed through a gap before getting to the outside and outracing the defense for a 26-yard score. Jacob Brown's kick pulled LaFayette back to within six points of the lead.

North Murray next possession ended with a 32-yard Hannah field goal, but the Ramblers immediately countered with a 74-yard march that took nearly five minutes off the clock. Austin Tucker bulled his way in from 10 yards out and the Mountaineers' lead was down to two with 10:29 left to play.

Needing a stop and seven more points to reach the magic five-point margin, LaFayette instead watched Griffin engineer a nine-play, 72-yard drive that culminated in his 1-yard sneak with 6:01 remaining, increasing the lead back to nine at 23-14.

Now needing two touchdowns and two extra points to secure a spot in the state playoffs, the Ramblers got a nice kick return by Teddy Ownby and a 15-yard face mask penalty was tacked on at the end of the play, setting up shop for the home team at the Mountaineers' 33-yard line.

A huge 19-yard sack by Carson Manis pushed LaFayette back past midfield, but on third-and-29, Ramsey found Sam Hall for a 42-yard pickup. Three plays later, facing fourth-and-goal from the 1, Martin got the ball across the plane as North Murray's lead was back to just two, 23-21, and still with 2:42 to play.

Tyler Morrison recover an onside kick attempt for North Murray and Rice came up big again with a 27-yard catch on third-and-six to keep the chains moving. Following a five-yard LaFayette penalty, Dempsey clicked off back-to-back seven-yard runs, the final one resulting in a touchdown to make it 30-21 with 1:35 to play following Hannah's extra point.

But the Ramblers weren't quite yet finished.

Four straight completions by Ramsey, including two nice catches by Trey Taylor that resulted in 35 yards, moved the ball to the North Murray 7 with just under a minute remaining. Rice jumped in front of a pass at the goal line on the very next play and returned the ball to midfield, only to have it stripped from behind. Taylor recovered for the Ramblers to give them new life at the 50.

However, on the very next play, a pass over the middle was deflected and landed in the very capable hands of Griffin, who returned the ball to LaFayette 28-yard line before taking a knee one play later to send North Murray to the playoffs for the sixth consecutive season.

After being held to just 50 yards on 5-of-12 passing in the first half, Griffin warmed up over the final two quarters and finished 16-of-29 for 242 yards. Rice had a big night with eight catches for 144 yards and two interceptions on defense. Griffin added 10 carries for 57 yards on the ground, while Dempsey went for 34 yards on 13 attempts.