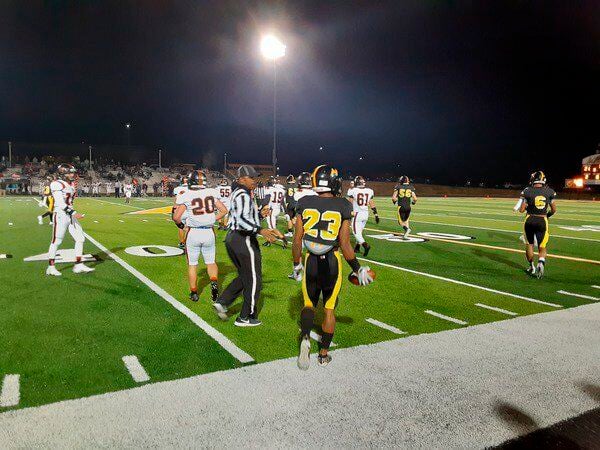 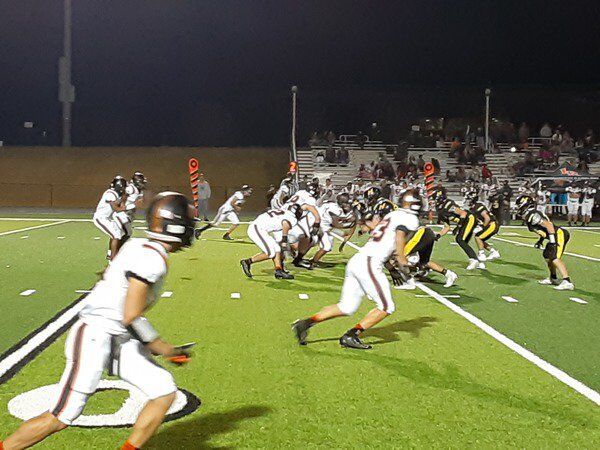 In a game where both offenses had much the better of the action Friday in Chatsworth, North Murray High School topped LaFayette in a 49-42 shootout.

In a game where both offenses had much the better of the action Friday in Chatsworth, North Murray High School topped LaFayette in a 49-42 shootout.

CHATSWORTH -- In a game overflowing with explosive plays, it was a quarterback sneak to gain a yard that proved decisive Friday night in North Murray High School's 49-42 win over visiting LaFayette.

Seth Griffin's successful sneak on fourth down from the LaFayette 43 with roughly three minutes remaining allowed the Mountaineers to burn the rest of the clock and hang on for a victory in a wild shootout.

"Lots of big plays, but we've been explosive all year, and we made big plays early, which was a big part of our game plan, to get a lead early," said Preston Poag, North Murray's head coach. Whenever they "got within seven, we answered."

The Mountaineers won the region last season on their way to a quarterfinal appearance in the Class 3A playoffs and an 11-2 record, but they're expected to receive the third seed this year and travel to North Hall High School Friday for their postseason opener.

The Mountaineers jumped to an early 14-0 lead, as Griffin threw deep on North Murray's first play from scrimmage, hitting Michael McDade for 57 yards before Griffin kept it himself on an option play for a 4-yard touchdown, just 124 seconds into the contest to complete the 70-yard opening march.

After D'Ante Tidwell intercepted LaFayette quarterback Jaylon Ramsey on the road team's first possession, Griffin found Cade Petty on the second play of the ensuing drive for a 41-yard touchdown.

The Ramblers (4-5, 4-3 in Region 6-3A) sliced the margin in half on Ramsey's 35-yard touchdown pass to Junior Barber, but Griffin's 65-yard touchdown toss to McDade on 3rd-and-15 doubled the lead again. Griffin was intercepted by Kevin Kremb, however, and LaFayette marched 93 yard to cut the deficit to seven following a short touchdown run by Ramsey.

The Mountaineers (6-3, 6-2 in Region 6-3A) fired back, as Griffin, under duress, stayed upright long enough to heave a bomb to McDade, who hauled it in for another 65-yard touchdown with 8:44 left in the second quarter.

"I was supposed to run an up-and-out," but by reading the defense, McDade switched to a go route, he said. "It feels great" to work open and then get the ball in stride.

The Ramblers responded, however, on Ramsey's 11-yard touchdown run with 7:09 remaining, but the third Griffin-to-McDade touchdown of the first half, a 35-yarder, pushed the lead to 35-21, and gave North Murray a 14-point lead at halftime.

"We saw on film they played soft" on the corners, and the third touchdown "was just a straight go route," McDade said. "The offensive line was key," because those linemen gave him enough time to break free and for Griffin to find him.

On LaFayette's opening possession of the second half, they faced a 4th-and-3 at North Murray's 14, and Ramsey gained nine yards before Jamario Clements rushed in on the next play for the score. Only 20 seconds later, however, Tidwell's 56-yard touchdown dash on the first play of North Murray's drive moved the margin back to 14.

A muffed punt by Cade Petty gave the Ramblers the ball on their own 44, but Petty looked to redeem himself with an interception, only to fumble it back to LaFayette on the return on the final play of the third quarter. On the opening play of the final stanza, Clements outran the Mountaineers defense to the end zone for a 43-yard score that sliced the deficit to 42-35.

"We need to get our defense better," Poag said. Teams are "pushing us around up front a bit and getting into our linebackers."

North Murray rallied again, as Tidwell, who intercepted two passes on the night, got his second rushing touchdown from a yard out with 7:11 remaining. Ramsey, though, sprinted for a 45-yard touchdown with 4:10 left to cut the deficit to 49-42.

An onside kick attempt failed, recovered by Ty Kendrick, and when Griffin converted his sneak roughly a minute later, the Mountaineers could finally exhale.

"We lost to Rockmart and Adairsville," the two teams who finished ahead of North Murray in Region 6-3A, each by a touchdown this season, so "we're 14 points away from winning the region," Poag said. "A few breaks, and we could have, but I'm proud of (this team), and now we've got to get ready for next week."

Mr. Wade Ervin Ferguson, age 92, entered into rest, Monday November 23, 2020 at the local hospital. Wade was born July 27, 1928 in Holcomb, MS, the son of the late Bill and Hazel Childs Ferguson. He was also preceded in death by his brother-in-law, Bill Luttrell and grand-daughter, Krista Ne…