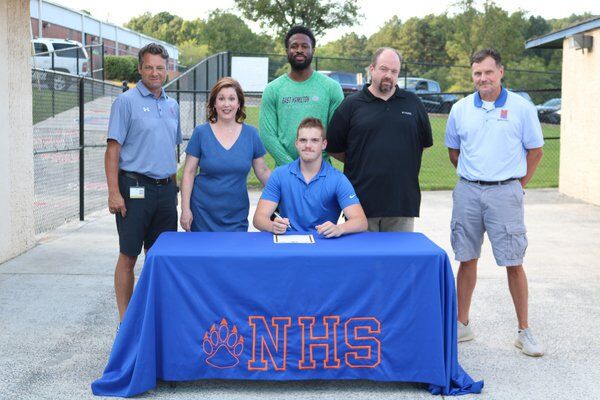 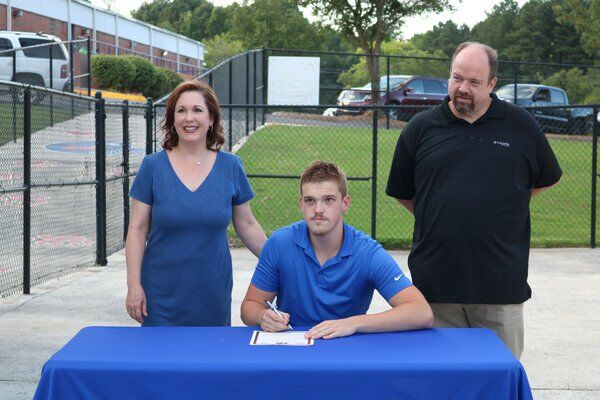 TUNNEL HILL — Northwest Whitfield High School’s Calen Amos played his entire junior season of basketball not knowing he had a fractured wrist on his shooting arm.

The 6-foot-8-inch, 230-pound big man fell during a dunk attempt just prior to the 2018-19 season, but played on, thinking it was just a sprain. When the pain and the limited range of movement didn’t go away, he knew something was up, but he knew he had an opportunity.

He began to practice shooting with his other hand, his left. He began using his left hand more in games, shooting 80% from the free-throw line using his off hand. By his own estimation, Amos says he can now shoot just as well with his left as he ever could with his right.

“I was working out more with my left hand and using my left hand more, and it really helped me do more on the basketball floor and even out my strengths,” Amos said.

After surgery at the conclusion of his junior season and a senior campaign played with his newly-acquired ambidextrous skills, Amos earned a spot on the basketball team at LaGrange College, where he signed this week.

“I just want to play basketball for as long as I can and go to one of the better schools in the south, and LaGrange fits that description perfectly for me,” Amos said at his signing ceremony Monday evening at the high school.

LaGrange competes in the USA South Athletic Conference at the NCAA Division III level in basketball. The Panthers have found success in recent years, winning the conference championship in 2014, 2015 and 2017.

“Anytime you can get one of your kids to college, it’s a great experience for them and the program,” said Ryan Richards, Northwest Whitfield’s head basketball coach.

Richards, the current Bruin basketball team and Amos' family and friends were on hand Monday evening at the entrance to the Northwest Whitfield football stadium to see Amos ink his ceremonial signing papers.

Richards said LaGrange is getting a tough basketball player and person in Amos.

“He’s obviously a pretty tough kid, because he messed his wrist up and didn’t really think much of it,” Richards said. “He was still as good as he was, because he just changed his hands and kept going.”

The wrist injury wasn’t the only one Amos had to go through. He dealt with tendonitis in his left knee throughout his sophomore year while doctors told him the pain was caused by his rapid bone growth not leaving time for tendons to catch up.

That rapid growth that left Amos at 6-foot-8 was unexpected, according to Amos’s mother, Angela. Amos is the youngest of six siblings, and none of the others grew taller than 6 feet.

“My closest brother is four years older than me, but I outgrew him in sixth grade,” Amos said.

With his size, Richards knew early on Amos had a chance to catch on with a college program.

“I’ve been here 17 years, and I’ve only had one other kid his size,” Richards said. “I told him way back that if you do what you need to do academically and on the court, you’ll have a chance to play.”

Amos credits that advice and Richards’ coaching with helping him develop as a basketball player.

“I’m grateful to coach Richards for helping to develop me to where I am,” Amos said.