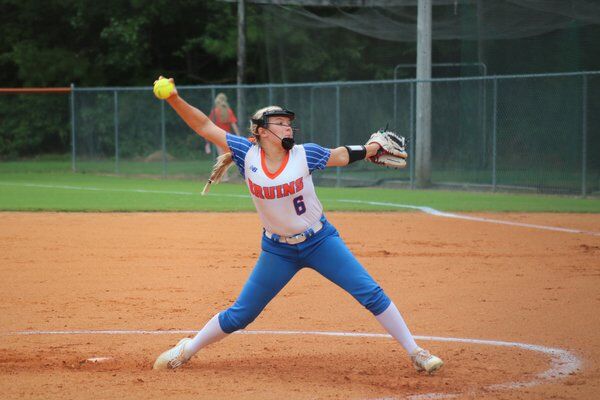 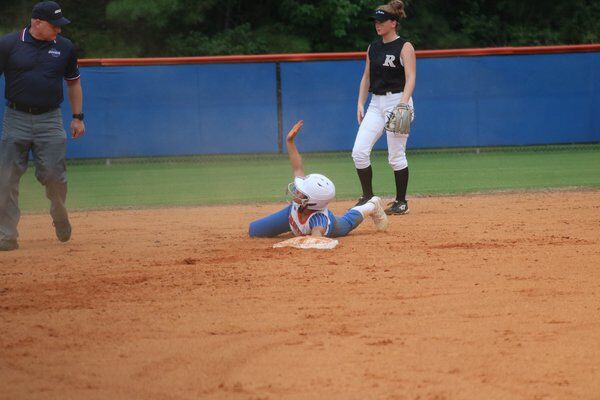 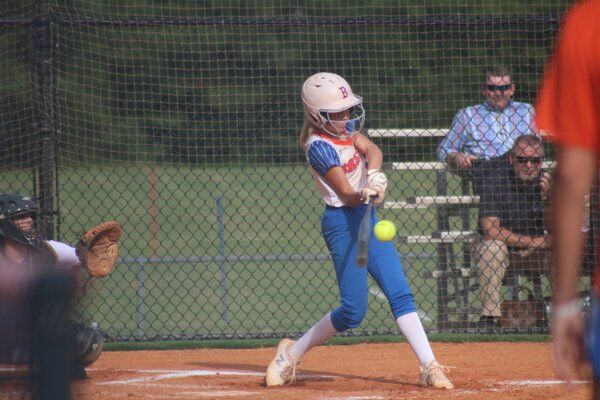 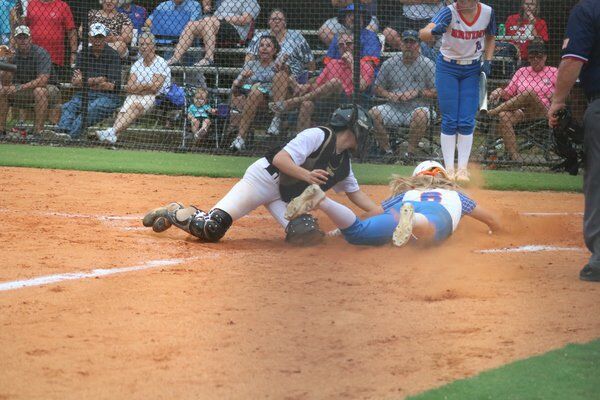 Northwest Whitfield High School's Kylie Hayes is tagged out while sliding into home in the Lady Bruins' 8-4 home loss to Ridgeland Thursday.

Northwest Whitfield High School's Kylie Hayes is tagged out while sliding into home in the Lady Bruins' 8-4 home loss to Ridgeland Thursday.

TUNNEL HILL — Northwest Whitfield High School (6-2) got an early lead at home Thursday night, but couldn't convert scoring chances into enough runs to keep Ridgeland (4-5) from pulling ahead for an 8-4 win.

The Lady Bruins led 2-1 after one inning and 4-2 after three, but the offense stopped there, and the Panthers scored the final six runs of the contest to pull out the win.

With more converted chances, the Lady Bruins could have done more damage early in the game. Northwest loaded the bases in the second inning, and a deep Abygail Jarvi drive fell just feet short of what could have been a grand slam, but the ball fell harmlessly into the glove of the Ridgeland center fielder.

Ridgeland had their chances, too, but a stubborn Northwest defense helped keep them within striking distance.

Ridgeland loaded the bases in four separate innings in the seven-inning game. The Lady Bruins held the Panthers scoreless in two of those and only allowed one run in another.

"We gave ourselves chances," Middleton said. "We just couldn't execute on offense when we needed to."

It was the fourth inning that Ridgeland couldn't be contained.

The Panthers added four runs in the fourth, loading the bases and making use of a couple of walks and wild pitches to take the lead for good.

Ridgeland added some insurance in the top of the seventh, as a Jenna Morgan solo home run was the first of two scores in the inning to put the Lady Bruins behind 8-4. Northwest managed to get a runner on base in the final inning, but couldn't muster a comeback.

Mia Sewell led the Northwest offensive effort with a 2-for-4 mark, including a double that dropped just inside the left field line and brought home a run for the Lady Bruins. Eden Rann was 2-for-3, and Allison Cowan and Alyson Jarvi both were 1-for-2, with Jarvi picking up another RBI. Laila Perry ran home from third for a score after an error by Ridgeland.

Kylie Hayes pitched in all seven innings for Northwest, her only respite in the start of the fourth inning, when Cowan came in to spell a tired Hayes. Hayes struck out seven and walked seven, allowing nine hits and four runs.

"Kylie had a little bit of an issue where she cramped up and couldn't breathe, but she got something to eat and came back in and played well," Middleton said.

The loss was the third game against Ridgeland in as many days and the first Bruin defeat at the hands of the Panthers.. The Lady Bruins traveled to Ridgeland for a double-header Tuesday, winning 13-2 and 10-8. Northwest won five straight games prior to Thursday night's setback.

Northwest next hosts Southeast Whitfield for a double-header on Tuesday at 5 p.m.