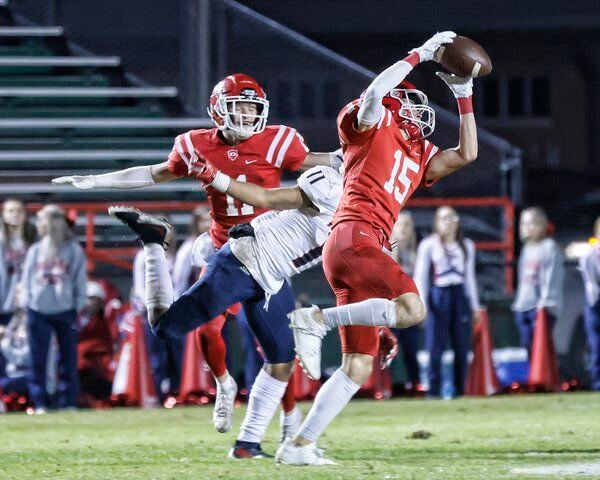 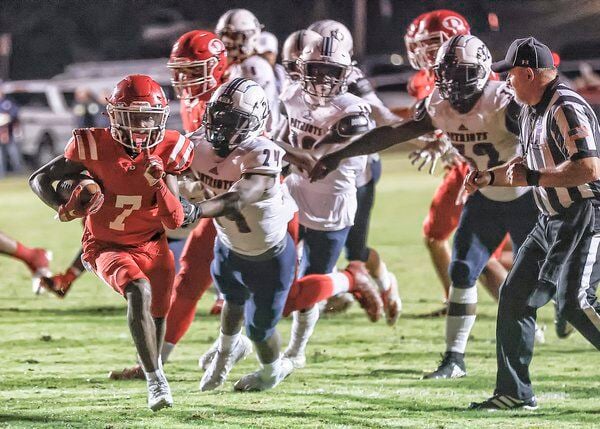 Dalton High's Journey Boston breaks into the clear for a 17-yard touchdown to give the Catamounts the lead in the fourth quarter of Friday's victory over Paulding County. 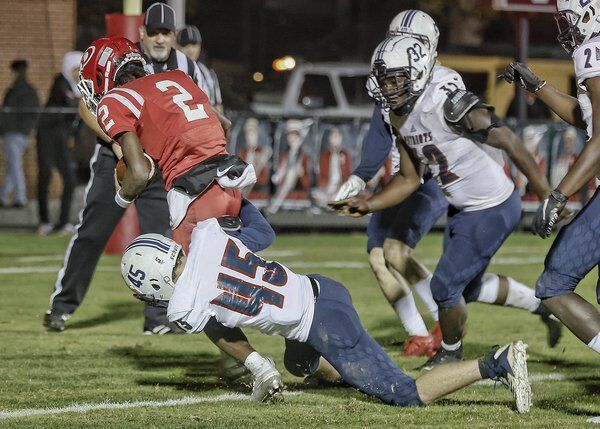 Dalton Catamounts quarterback Ashton Blackwell carries the ball across the goal line for a touchdown Friday night in his team's 27-15 Homecoming victory over Paulding County. 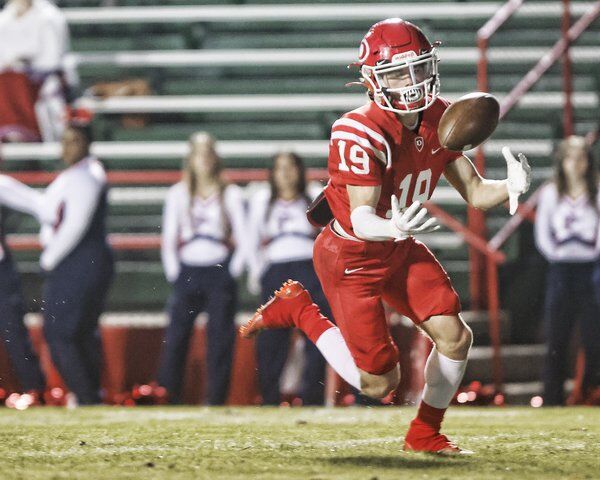 Though he bobbled the ball, Dalton High School's Luke Blanchard ultimately secured it for a 49-yard touchdown reception Friday during his team's 27-15 home victory over Paulding County.

Dalton High's Journey Boston breaks into the clear for a 17-yard touchdown to give the Catamounts the lead in the fourth quarter of Friday's victory over Paulding County.

Dalton Catamounts quarterback Ashton Blackwell carries the ball across the goal line for a touchdown Friday night in his team's 27-15 Homecoming victory over Paulding County.

Though he bobbled the ball, Dalton High School's Luke Blanchard ultimately secured it for a 49-yard touchdown reception Friday during his team's 27-15 home victory over Paulding County.

Behind the energy of the home crowd on Homecoming, Dalton High School jumped out to a 14-0 first-quarter lead on Paulding County Friday, and while the Patriots scored the next 15 points to seize the lead after three quarters, the Catamounts used a potent ground game — and a trifecta of fourth-quarter interceptions — to pull away for a 27-15 victory.

"We're at our best when our defense gets turnovers and our offense scores on short fields," Dalton head coach Matt Land said. "Our offense has had this potential all year, and tonight this team showed the resolve they've had all year long."

"We played as one, one team, one unit," seconded senior running back Maurice Howard. "All night, we were there for each other when we made mistakes."

Early in the fourth quarter, with Paulding County already ahead by a point and driving for more, senior Parker Adams cut off the drive with an interception of Brayden Mauldin. Though the Catamounts didn't cash in on the ensuing drive, the pick did allow them to flip the field and — perhaps more importantly — energized the team.

"If you're juiceless, you're useless, and we lost" the juice after the first quarter until the pick by Adams, Land said. "The team responded to that big play, and then they took that juice from the sidelines to the field — I'm proud of them."

After a defensive stand, the Dalton offense took over on Paulding County's 47 with 5:38 remaining. Howard's 20-yard rush carried the ball down to the 17, and on the next play, Journey Boston dashed into the end zone, although the two-point-conversion attempt failed due to an incomplete pass.

Down 20-15, the Patriots started the ensuing drive on their own 24, but Brady Pendley intercepted Mauldin on the first play, and on the first play of Dalton's drive, quarterback Ashton Blackwell tight-roped down the home sidelines for a gain of 34, then took it the final three yards on the next play to make it a two-possession game with 3:44 remaining. Ahead by 12, the Catamounts knew the Patriots had to throw, and an AJ Hernandez interception at Paulding County's 35 with 3:17 remaining proved to be the coup de grâce, as the Catamounts ran out the clock and snapped a five-game losing streak.

"This losing streak we were on, I was tired of losing," Howard said. "It feels great to win a game, especially at Harmon Field."

"It's special playing here at Harmon Field, (because) this is a special place," Land said. "I have so much respect for these seniors, who fought all year long."

On the game's opening drive, Land rolled the dice by going for it on fourth-and-2 at his own 44, and while Howard was stacked up initially, he refused to yield, even running over a defender, to convert the first down.

"That felt like a big play early," Howard said. "Without that, we couldn't have gone down and scored."

A long connection from Blackwell to Karim Page moved the ball to Paulding County's 13, and Blackwell capped the 80-yard opening drive with a 5-yard rushing touchdown. The Catamounts doubled the lead with 3:18 remaining in the first quarter on a 49-yard touchdown pass from Blackwell to Luke Blanchard, who broke open down the seam.

The Patriots (3-6, 1-5 in Region 5-6A) failed to record a first down in the opening quarter, but a 4-yard touchdown run by Tony Lauzurica midway through the second quarter got them on the board, although the extra point attempt was blocked. A botched punt attempt by Dalton gave the Patriots the ball back only 28 yards from the end zone, and the visitors scored when Si'Les Modisett went for a 22-yard touchdown. The two-point attempt failed when Lauzurica was swarmed by the Catamounts after taking the direct snap.

The teams exchanged turnovers late in the half, so Dalton maintained the lead at the break, but a deliberate drive by Paulding County to open the second half gave them the lead. The drive took nearly eight minutes, and ultimately kicker Matthew Frey split the uprights from 27 yards out to give the Patriots their first lead, 15-14.