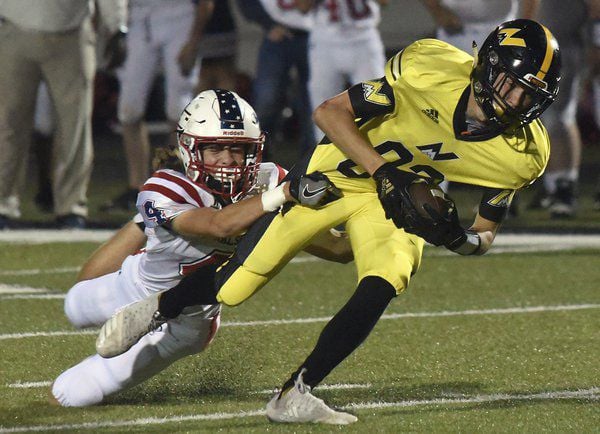 North Murray High School wide receiver Landon Burrell is pulled down from behind after making a catch against Haralson County last season. 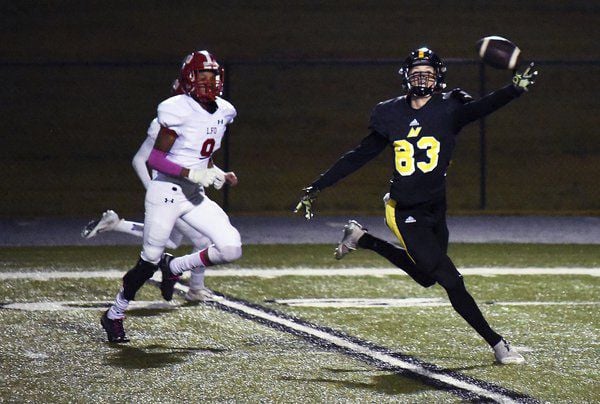 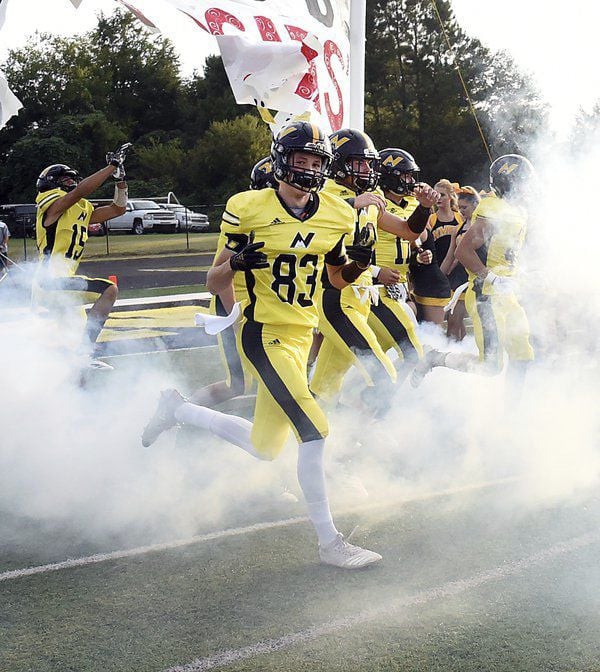 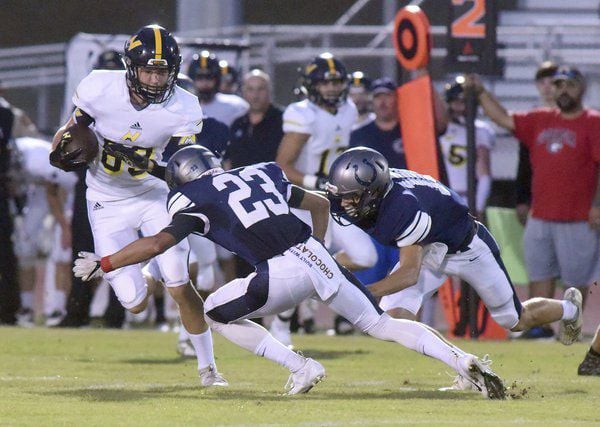 North Murray High School wide receiver Landon Burrell is pulled down from behind after making a catch against Haralson County last season.

Editor's note: Follow the Daily Citizen-News sports department for recruiting features on local high school football players each Friday this summer. Rising seniors with the potential to play at the next level will answer questions leading up to football season this fall.

Landon Burrell enjoyed a breakout season for North Murray High School last fall in his first season as a full-time starter for the Mountaineers. The 6-foot, 3-inch, 180-pound rising senior wide receiver led North Murray in 2018 in receptions with 47, receiving yards with 597 and receiving touchdowns with seven.

Burrell said he hopes to earn a college scholarship while helping his teammates make a run at the first region championship in program history.

Daily Citizen-News: Do you have any official college offers yet? Who have you been in contact with?

Burrell: No offers right now. I've visited a lot of schools like Yale (University), Cornell (University), Wofford (College) and Georgia Southern (University). It's been cool to go to all the schools and to get a feel from the coaches and players what it would be like at each one. I'm in pretty regular connection with all the schools, and I talk to them all pretty evenly. The biggest thing is I'd be fortunate to go to any of those schools.

DCN: How do those college visits come about?

Burrell: They're just as random as you might think they are. A school will send me a message saying they want me at their camp, want me to visit their campus. It's all about the time and dates. Getting up to those Ivy Leagues is a little difficult, mostly because of the money but also because they're 14 hours away if you drive. Given that I didn't have any things on those dates, I talked with my parents and we talked about whether it was worth all the money and time. Since this is what I've always wanted to do, we made it happen.

DCN: What are those visits normally like for you?

Burrell: On some visits I'll participate in a camp and then see the school after. Then there are others where I'll go and meet the players and coaches. At Yale I got to spend the night with one of their senior linebackers and see how they work. Kind of like a day in the life of a Yale football player. He was awesome and said just make yourself at home. I actually rode on the bus with them to practice and got to see how they work out and everything.

DCN: Did you have a dream school growing up?

Burrell: Growing up, my cousin Rhett McGowan played for Georgia (2010-13). We were at almost every game and that kind of became my dream school. It isn't really anymore because he's not playing there anymore. It really had a lot to do with him.

DCN: He had a pretty good career at Georgia playing your same position. Has he shared anything with you about what it takes at that level?

Burrell: He's at a majority of my games now, and he just said the biggest thing is your drive. It's not all a numbers game as far as height and speed. If you can catch the ball and get open you can play at the next level.

Burrell: (Laughter) There's a funny story about that. Freshman year I played defensive end. I may have been the skinniest, tallest defensive end there ever was. I gave the first (offense) some scout looks and I'm telling you those offensive linemen manhandled me. But, yeah, beyond that I've always played wide receiver and defensive back. I'll play cornerback this season, too.

DCN: When you go to camps at these colleges, what kind of things are they asking you to do as a wide receiver? Do they tell you what they're looking for?

Burrell: The biggest thing I hear from coaches is they want to see how fast you can get out of your break to create space and separate from the (defensive back). Catch the ball and create space. We'll run dig, curl and out routes. We'll usually see multiple coverages, they'll mix that up, too. Especially for me as the X receiver, I'm usually on an island and see a lot of press man coverage.

DCN: When did you think it was a real possibility for you to play in college?

Burrell: I would probably say when I first started getting letters from Yale. I had gotten some camp invites, but then Yale started sending me stuff and I thought "Wow I can do this." I've always wanted to play at the next level ever since watching Rhett.

DCN: Who's helped you most to improve as a football player?

Burrell: I'll say I've had a lot of help from a lot of people. The biggest person who's pushed me is my mom. She keeps me going, keeps me striving. My receivers coach (Nich) Bartley, and Rhett would be a big one, too. Even on those bad days, where you take a loss, Rhett helps me see it's not the end of the world even though it feels like it.

DCN: What do you think your strengths are, and what are you working to improve in your game?

Burrell: I think the biggest thing for me to improve is my speed. I could get faster, maybe a little stronger. I think my biggest strength is my height and my reach. I feel like it's kinda hard to guard me one on one, and I'm gonna win most of those jump balls.

DCN: Do you have any personal goals for this season?

Burrell: Not as much personal goals as I do team goals. We're gonna go as far as we wanna go. The biggest thing I want for us is to win region. Push ourselves, and to challenge those good teams, see how far we can go.

I always feel the same, that we're a strong team. We have quite a few returning seniors, quite a few returning all-area and all-region players. We've grown up playing with each other our whole lives. I think we've dominated at these 7-on-7s this summer. I'm just ready to get it going because there's nothing like Friday night lights.