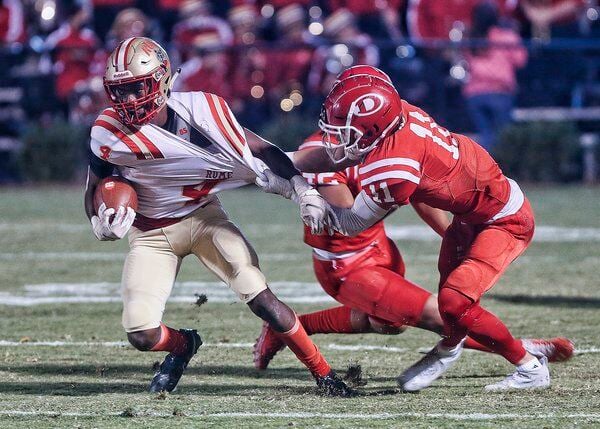 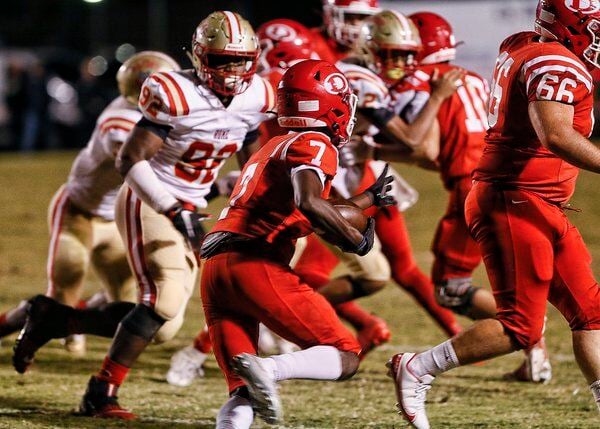 Rome High School scored touchdowns on their opening drives of both halves and consistently won the battle at the line of scrimmage — on both sides of the ball — during a 24-8 victory at Dalton Friday.

"All games are won up front in the trenches," and even though the Wolves were without their starting quarterback and top two tailbacks Friday, "they still have that big, physical offensive line," said Matt Land, Dalton's head coach. "They really only ran outside zone, but they ran it to perfection."

Freshman Shaun Nelson accounted for all three of Rome's touchdowns, two on the ground and one receiving, and "hats off to him," Land said. "He found the seams."

It's remarkable that Nelson was playing eighth-grade football last season and could step in with such aplomb Friday, said John Reid, Rome's head coach. "It's tough to take on" that responsibility as a freshman, but "I'm really proud of him."

Nelson credited his offensive line for clearing the runway for him — he often was untouched until he was at least five yards beyond the line of scrimmage — and added, "It felt good out there."

The Catamounts (1-4, 0-3 in Region 5-6A) failed to generate much of a running game, only scoring their touchdown with scarcely more than four minutes left in the game, and they hurt themselves with several penalties and two turnovers.

"Offensively, we're just not at a point right now where we can (thrive) without a big play, but it's game five, so we can't say we're young or inexperienced," Land said. "There are no excuses anymore."

"We've talked all year about not having penalties on first down, because they put us behind the sticks and (often) lead to third downs" that aren't realistic to convert, he added. "We need to do a better job on first and second down" to establish third-and-manageable situations.

Playing their first home game since Sept. 4, the Catamounts had to punt from their own 2 yard line on their opening possession due to penalties and an ineffective series of downs, so Rome took over at Dalton's 40, and Nelson ripped off 26 yards on the first two plays. On 4th-and-5 from the 21, freshman quarterback Reece Fountain moved the sticks with a completion to Jaquavious Wise, and Nelson later ran in from the 3 to put the Wolves ahead 7-0.

Ashton Blackwell was intercepted by Jameion Leath over the middle on the next possession, so Rome took over at Dalton's 43, but the Catamounts defense held the line, forcing a punt. Early in the second quarter, Fountain dropped the ball, setting Dalton up in Rome territory, but this time the Wolves defense made a stand after a turnover, forcing a punt.

Late in the second quarter, the Wolves kept their offense on the field for a 4th-and-1 at Dalton's 5, but a delay of game penalty forced a field goal attempt, and Fernando Lopez-Romero hit the left upright, keeping it a one-score game at the break.

However, Rome (3-3, 2-1 in Region 5-6A) marched 80 yards in just under four minutes, capping the drive with a 7-yard screen pass to Nelson. On the ensuing drive, Journey Boston fumbled, and Rome took possession at midfield, eventually scoring a 24-yard field goal by Lopez-Romero.

Early in the final stanza, the Catamounts stoned Fountain on a quarterback sneak at the goal line to reclaim possession and keep the score 17-0.

Dalton's offense, however, quickly punted the ball back, and Nelson closed Rome's scoring with a 10-yard touchdown run with 5:36 remaining.

Blackwell found AJ Hernandez on a fly pattern down the sidelines for a gain of 57, then hit Luke Blanchard for a 6-yard score to get the Catamounts on the board. The two-point conversion succeeded on a Blackwell-Warner Ross pitch-and-catch, but Dalton's onside kick attempt failed, and the Wolves ran out the clock on a chilly fall evening with temperatures in the 50s.

The Catamounts, who already have lost as many games as they did all of last season when they finished 7-4, return to the road Friday, when they visit Alexander at 7:30 p.m.