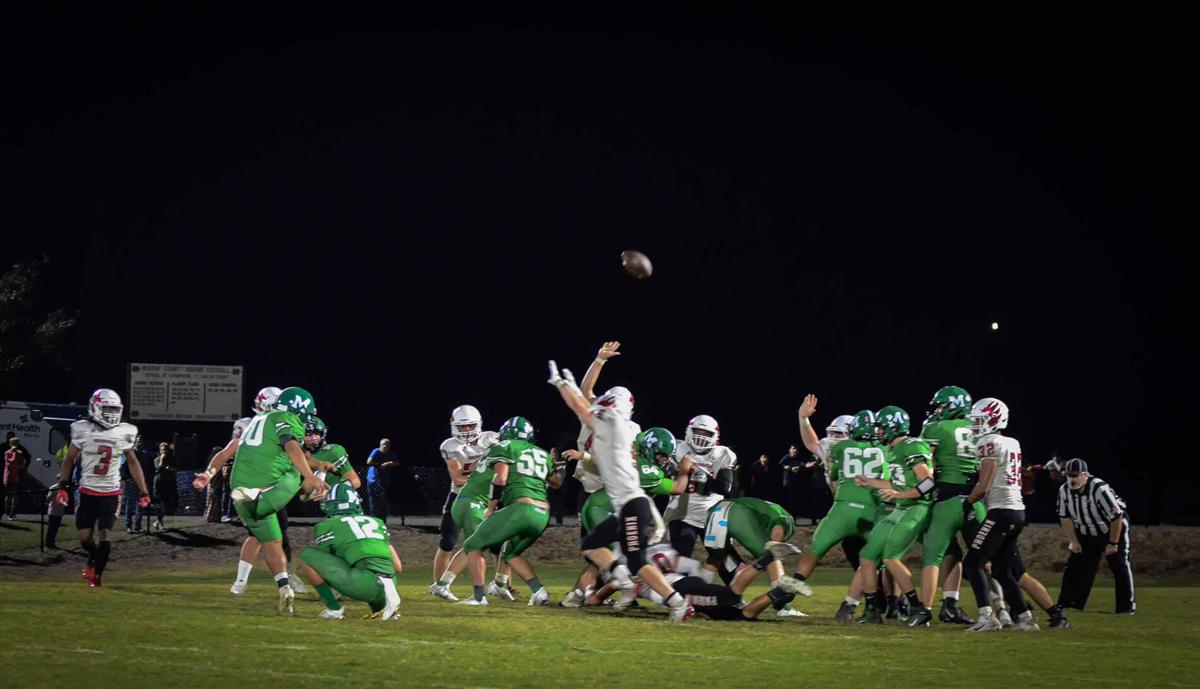 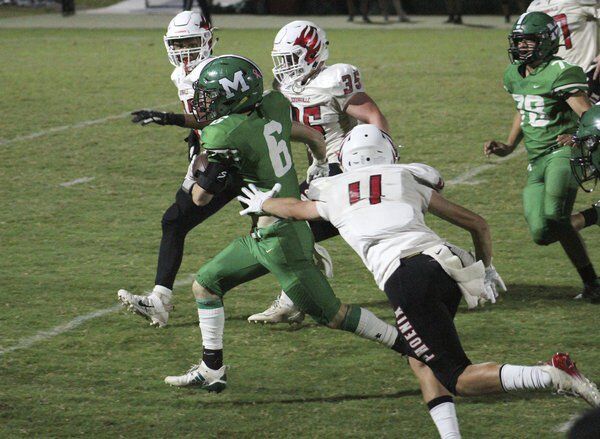 Murray County running back Noah Densmore breaks loose on an end around run for a 42-yard touchdown in the third quarter against Sonoraville on Friday night.

Murray County running back Noah Densmore breaks loose on an end around run for a 42-yard touchdown in the third quarter against Sonoraville on Friday night.

CHATSWORTH — As senior kicker Elber Romero emerged from the locker room, a substantial throng that had gathered serenaded him with chants of "Elber, Elber, Elber," and understandably so, as moments earlier, he'd drilled a school-record 52-yard field goal on the final play of the game to give Murray County High School a dramatic 27-24 win over Sonoraville Friday.

"It means a lot, and I know they all support what I do," said Romero, who told teammates earlier this week he believed he'd set a new school record in Friday's game after tying the school record last season with a 50-yarder in a September win over Coahulla Creek High School. "I made it for the team and for myself."

Romero "makes them all the time," and even though he'd missed a 47-yard field goal wide right earlier in the fourth quarter, head coach Chad Brewer had no reservations about sending him out for the 52-yarder, he said.

With 8:04 left, Romero missed a chance to give the Indians the lead, but on the next play from scrimmage, Brandon Nuckolls intercepted Sonoraville quarterback Brady Lackey and returned the ball to the Phoenix 20. A couple of plays later, Carson Voiles caught a 10-yard touchdown pass from Justice Knotts to give Murray County a 24-17 advantage.

"That (pick) was the play of the game" defensively, Brewer said. "These kids are tough and resilient, and they never give up."

Sonoraville (2-4, 0-4 in Region 6-3A), which beat Murray County, 34-3, last season, tied the game on a quarterback sneak from the one-foot line by Lackey with 4:11 to play, but a couple of critical carries by Davis Redwine on the game's final drive set the stage for Romero's heroics.

"I wasn't thinking about" the earlier miss, said Romero, who noted his range extends to 55 yards. "I still had confidence in myself."

On Homecoming, Murray County was without starting quarterback Kaleb Jones due to an ankle injury, so Tyson Leonard stepped into the void, before he gave way to Knotts in the second half.

"Tyson was good versus LaFayette" earlier this month, and "we're confident in both" he and Knotts, but "we thought we might get a little spark" with the latter, Brewer said. "It turned out to be the right move."

The first quarter was nothing but punts from both sides, but Romero's 20-yard field goal with 9:48 remaining in the half broke the scoreless tie. The home team stoned the Phoenix on 4th-and-1 at the Murray County 35, and on the ensuing drive, Taylor Carrell got behind the defense, and Leonard hit him in stride for a 63-yard touchdown with 5:05 to play in the opening half.

Sonoraville responded just over two minutes later, with Brant Bryant's 18-yard rushing touchdown, cutting the lead to a field goal, and then he recovered a fumble on Murray County's first play from scrimmage. The Indians defense refused to yield, forcing a punt, but Murray County coughed it up again on their own 12 with under a minute left in the half. Lackey's 12-yard touchdown with 44 seconds left gave the visitors a 14-10 lead — and momentum — heading into the second half.

A second fumble of the night by Voiles, and Bryant's second recovery, set the Phoenix up around midfield, but the Indians defense again stood strong, and a 47-yard touchdown scamper by Noah Densmore lifted the Indians to a 17-14 lead with 4:35 left in the third quarter. Sonoraville's kicker, Daniel Orellana, converted a 34-yard field goal with 70 seconds left in the third quarter, which sent the teams into the final quarter tied at 17.

The Indians will travel to Rockmart next Friday for a 7:30 p.m. tilt against one of the region's top teams.