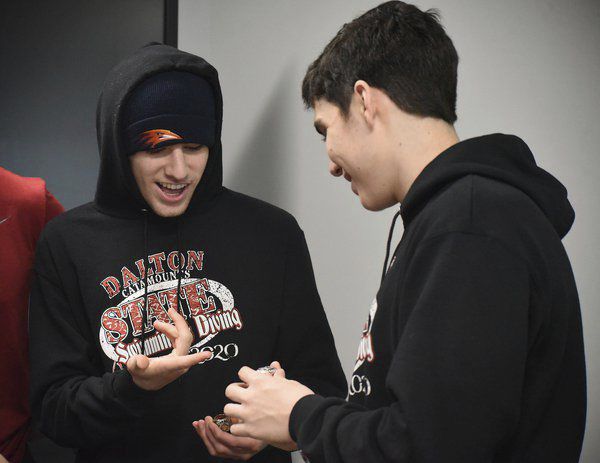 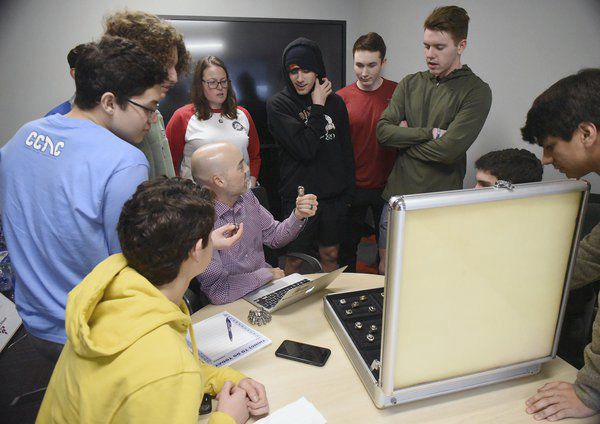 Matt Hughes, middle, of Jostens talks with the Dalton High School swimming and diving team about their state championship rings. 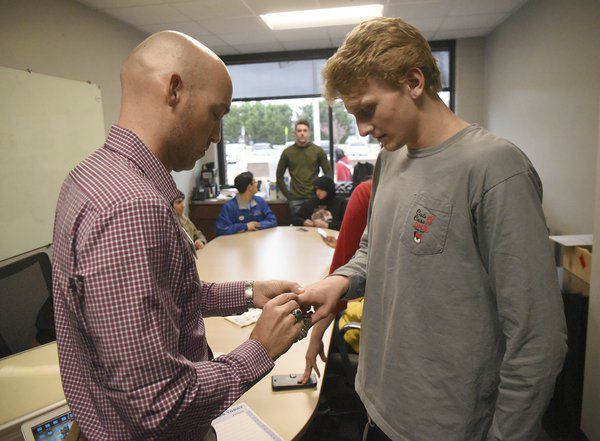 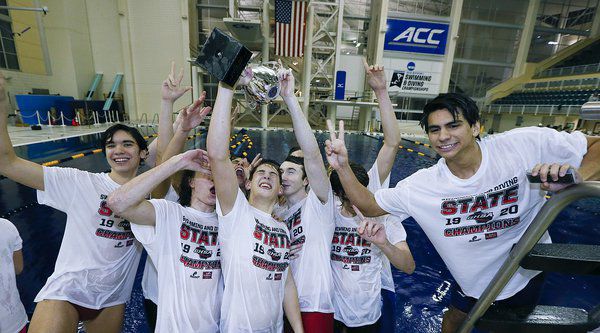 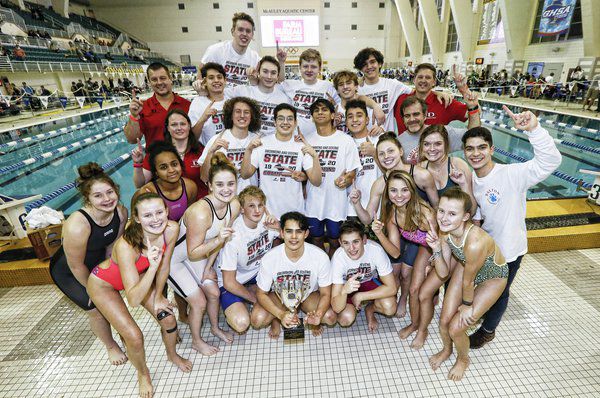 Matt Hughes, middle, of Jostens talks with the Dalton High School swimming and diving team about their state championship rings.

A few days after winning their state title, the 13 members of the Dalton High School boys swimming and diving team gathered after school to pick out their championship rings.

For some, it was their second and last state championship ring.

For a few, it was the second of possibly three rings.

For others, it was the first of what they hope will be several more.

The rings, whether worn, displayed on a mantle or tucked away in a drawer, serve as reminders of the team’s 2020 Georgia High School Association Class 6A swimming and diving championship, which they won on Feb. 8 at The McAuley Aquatic Center on Georgia Tech’s campus in Atlanta.

While the rings symbolize individual success, their state title was truly a team effort. Contributions came from up and down the roster — from underclassmen to seniors, from divers to swimmers, from first-place finishers to tenth-place finishers — as Dalton beat Alpharetta High School, 445 points to 411 points.

It was the Catamounts’ second state title in three years. Dalton won the state swimming and diving championship in 2018 and finished second in 2019 to Johns Creek High School. The team used the sting of that second-place finish as motivation in their pursuit of the state title.

“I feels really good,” said Henry Bethel, a junior who now has two state titles. “Last year we ended coming up short, coming in second, after winning my freshman year. That hurt pretty bad. As a team, that was just kind of something we kept in the back of our minds for 365 days and it feels really good to put that behind us and be back on top.”

This time around, the team had a combined seven first-place finishes (in either individual or relay events). On the night Dalton clinched the title, the Catamounts’ 200-medley relay team set a state record as Oscar Chenard, Bethel, Ross Emilio Valdez and Jack Forthman combined to finish the event in 1:32.25. The previous record of 1:32.30 was set by The Westminster School in 2016.

The championship was the culmination of a grueling, year-round training and competition schedule for Dalton. Early morning workouts. Hours in the pool. Trips to meets. Strength work. It all came together during the three-day championships in Atlanta.

“Swimming is a very mental sport as well as physical, so they have to have a cool head,” said Sharlinda Haight, Dalton’s swimming and diving head coach since 2007. “A lot of them do a lot of thinking about their swimming, they process it, they analyze what they have to do. Our boys are very seasoned swimmers so I feel like they kind of perform optimally physically and mentally at big meets. They know what they need to do in their heads to prepare themselves. We work up to it, and as coaches watch them shine at the end. They’re amazing swimmers, amazing divers, amazing students, and I get really excited for them when it pays off in the end.”

Going into the state championships, Haight said the team had swam great all season. After Dalton’s “outstanding” performance in November at the McCallie Invitational in Chattanooga, Haight knew the team didn’t have a ceiling. They had kept tabs on their main competition, Alpharetta and Johns Creek (which finished third in Class 6A), throughout the year. The team was confident heading into Atlanta.

For Valdez, the confidence came from the hours upon hours of work the team put in leading up to the state championships. He was confident — but not overconfident — that the team would bring home the championship trophy.

“It was something that was going to be hard, but it was something that I knew we could definitely do because I’ve seen what the guys have done this year in practice and at meets,” said Valdez, a senior. “I knew we were all capable of stepping up to the challenge and doing it. It was just really exciting and really fun just to be able to share that with everybody, with the people that were there for the first time and all the seniors and coaches. It was a really amazing time.”

Dalton competed in the finals during the evening session on Feb. 8, meaning they had plenty of time to kill at the hotel before the meet. Valdez said the atmosphere at the hotel was laid back.

“Nobody was harping about how we had to do good in the finals,” Valdez said. “Everybody was just chilling, bonding together, resting. Then when we got on the bus to go to the pool, it was kind of quiet. Everybody was getting into their zone. In warmups, everybody was building on that. Once it started, everybody gave each other one final word of encouragement, just a final good luck, a you got this.”

The finals got off to a roaring start for Dalton. In the first race, the 200-medley relay team set the state record causing a “domino effect,” Valdez said.

“There was no stopping after that,” he said.

The foundation for the championship, however, was laid Thursday night during the diving portion of the meet. Bethel raved about the performance of senior divers Jake Barnes and Charlie McClurg, who finished fifth and fourth overall, respectively. The duo amassed 37 points, giving Dalton a jump start on the scoreboard. Dalton won the championship by 33 points, so the divers played a big role in the victory.

McClurg, who was a sophomore on the 2018 state championship team, went into the meet “more excited than anything.” He wasn’t nervous. With this being his senior year he simply wanted to enjoy the event and do his best, he said.

With most divers from the Atlanta area, McClurg was at a disadvantage. Most had practiced on the diving boards at Georgia Tech many times; McClurg only uses them once a year. Since Dalton High has different boards than Georgia Tech, he drove to McCallie to practice on the boards there, which are similar to those at Georgia Tech. The practice paid off.

“For me personally, this win feels a whole lot better,” said McClurg, when asked to compare the 2020 state title to the championship in 2018. “My sophomore year, we won by such a big margin that even if I had not scored any points we would have won. And this year, it was a whole lot closer. I felt like I got to contribute a whole lot more and it just made the victory that much sweeter.”

Bethel agreed. Although he wasn’t lessening the thrill of the 2018 state title, Bethel said this year’s championship was “definitely more enjoyable” because he was able to contribute more to the team.

“I’d say this year was more fun partly because my freshman year we went in just about knowing we were going to win,” Bethel said. “This year, we fought through some adversity all year long and coming out on top is a really good feeling.”

The adversity? Last year, Dalton lost to graduation “two of the best high school swimmers Dalton has ever had” in Anthony Calderon and Jonathan Shaheen as well as several other key swimmers, Bethel said. The Alpharetta team was “incredibly deep” with almost twice as many swimmers as Dalton, Bethel said.

“To go in, hold our own and beat them was something special,” Bethel said.

Going into the final event on Saturday night — the 400 freestyle relay — McClurg said the team was told if the relay team didn’t DQ, then Dalton would win the state championship.

“Everyone went crazy. Those 30 minutes up to that event, we were just so excited,” McClurg said.

The relay team didn’t DQ. Far from it. They finished first.

All that was left was the celebrating. The Dalton team and coaches did the traditional splash down celebration into the pool. McClurg said the coaches did backflips into the water, all with varying degrees of success. The celebration, McClurg said, is what he will remember most about the state championship.

Many of Dalton High’s swimmers train and compete with the Carpet Capital Aquatics Club, giving them the edge to compete and flourish against the Atlanta-area teams with larger swimming programs, a greater number of pools and more facilities.

“To be able to swim against those Atlanta teams you have to swim year-round to be at their level,” Haight said. “These boys train with him (Meszaros) year-round. He works them really hard, he pushes them and they respond to it. They train really hard, they push each other so I think one of our biggest things that we have at Dalton is that relationship. We work really well together and Jason does a fantastic job with his team, which helps with our success as well.”

Success that the 2020-2021 Dalton swimming and diving team hopes to repeat next February in Atlanta.