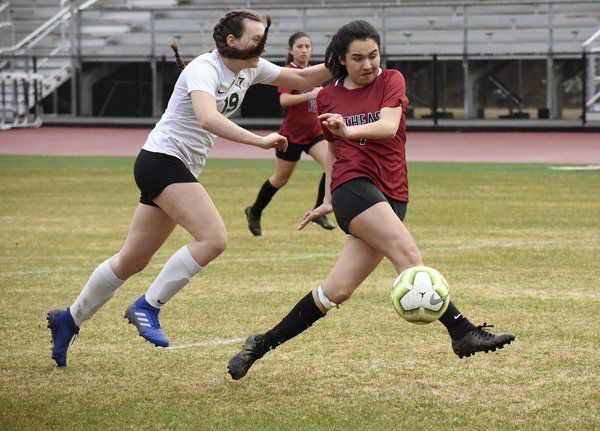 Southeast Whitfield High School's Karla Hernandez fires a shot on goal, scoring in the second half. 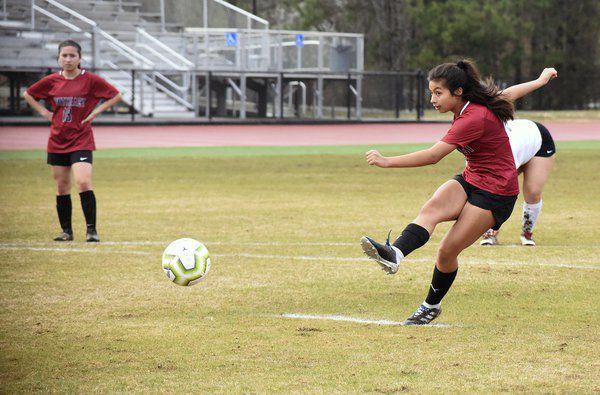 Southeast Whitfield High School's Marissa Gonzalez scores on a penalty kick at the end of the first half. 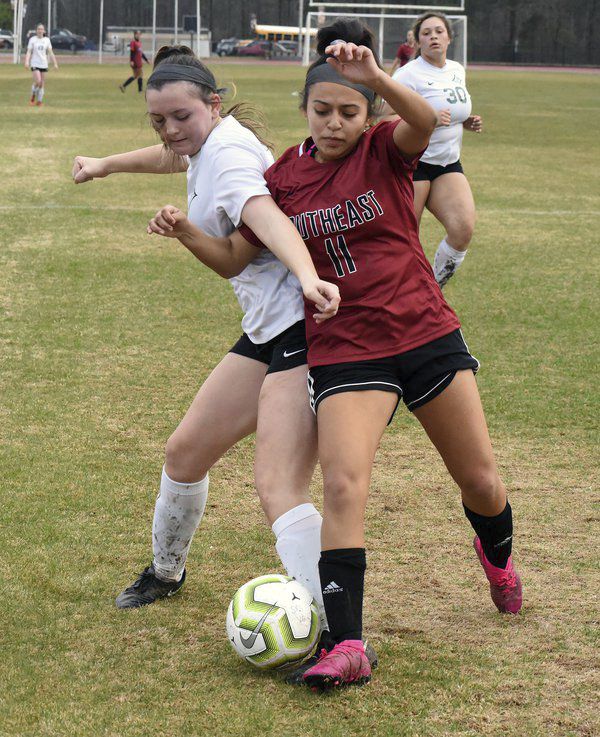 Southeast Whitfield High School's Karla Hernandez fires a shot on goal, scoring in the second half.

Southeast Whitfield High School's Marissa Gonzalez scores on a penalty kick at the end of the first half.

After an early first-period goal Tuesday, it took the Southeast Whitfield High School boys soccer team until overtime to light up the scoreboard again.

When that time came through, the goals came quickly in a 3-2 victory.

Despite a 20-4 advantage in shots on goal in regulation, Southeast allowed a goal from Pickens High School that forced two 10-minute overtime periods. Even with a flurry of five shots on goal in the final minute, the Raiders couldn't get one to go that would have ended the game before extra time was needed.

The Raiders added one goal in each overtime to lessen that disparity in shots and goals.

"We hadn't been in overtime yet this year," Southeast head coach Hector Holguin said. "Once we got in there, they responded well."

Brayan Herrera got that first extra-time goal, breaking away and depositing one last Pickens goalkeeper Jack Lowrie with 5:50 in overtime, ending the stalemate. Herrera also scored the first goal of the game, scoring eight minutes into the first.

In the second overtime period, Jerry Favela snuck one past Lowrie, extending the lead before Pickens' Jose Sanchez scored a too-little, too-late goal with 48.2 seconds left in the overtime.

Lowrie saved 21 of the 24 shots on goal that he faced.

"We knew coming into this game that it was going to be tough, but at times we made it tough on ourselves," Holguin said. "At halftime I told them there were going to be more and more chances. We were finally able to put them away."

The Southeast girls soccer team shut out Pickens 4-0 Tuesday to earn a win in their first region game of the season.

"It's a great way to start region play," Southeast head coach Todd Close said. "We've got a region full of tough opponents, and we can't take any of them for granted."

The Raiders (4-3, 1-0 Region 6-4A) shot early and shot often, managing to sneak a few past Pickens goalkeeper Sadie Phillips.

Anna Perez struck first for the Raiders, finally getting past Phillips with 18:09 left in the first half.

With just 1.7 seconds left in the first half, Pickens was whistled for a foul, allowing Marissa Gonzalez a penalty kick, which she netted.

Karla Hernandez scored with 33:05 left in the second period, while Emely Martin tallied the final goal.

"I'm proud that we just didn't quit," Close said. "We kept playing for all 80 minutes."