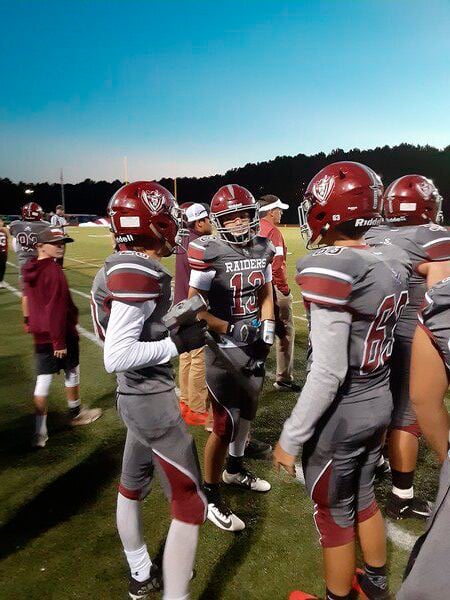 After recording his first interception of the season Friday against Armuchee, Southeast Whitfield High School senior Laine Carden was able to carry around the squad's turnover sledgehammer and celebrate with his teammates. 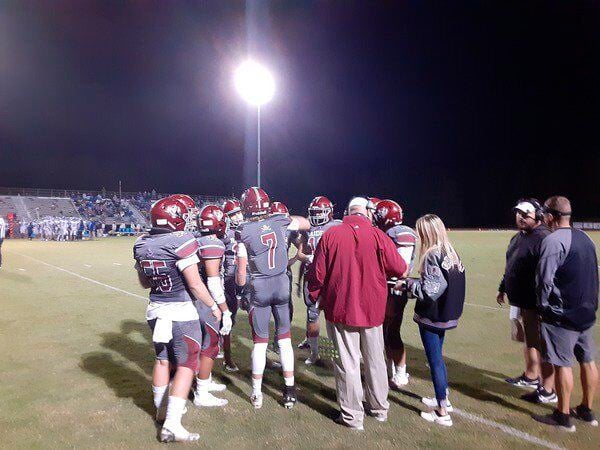 Southeast Whitfield High School senior Ethan Hill (7), who moved from wide receiver to quarterback this season, rallies his offense during a timeout in Friday's 21-7 win over Armuchee.

After recording his first interception of the season Friday against Armuchee, Southeast Whitfield High School senior Laine Carden was able to carry around the squad's turnover sledgehammer and celebrate with his teammates.

Southeast Whitfield High School senior Ethan Hill (7), who moved from wide receiver to quarterback this season, rallies his offense during a timeout in Friday's 21-7 win over Armuchee.

The 2020 season will not be a winless campaign like 2019 was for Southeast Whitfield High School; the Raiders made certain of that Friday with a 21-7 win over visiting Armuchee behind an opportunistic defense that forced four turnovers and the option offense's consistent rushing attack.

"It's awesome," said senior Laine Carden, who had his first two interceptions of the season Friday. "Nothing feels better than winning."

"It feels great for the kids, because they work so hard, putting in the time and the effort," said Southeast's first-year head coach Todd Murray, who picked up his first win as a head coach. "Our defense stood strong for us; the defensive line controlled the line of scrimmage, and our defensive backs had (three) picks."

Thanks to excellent scouting by Raiders coaches, "we knew we were prepared for this team, and we were mad because of how bad we got beat last week," a 48-0 shutout at the hands of Fannin County, Carden said. "We came into this game with an attitude, and I think we showed that attitude."

For Carden's first-quarter pick, he peeked into the backfield and saw the ball was already gone, so "I knew it was going deep," he said. "I just kept running," and he found the ball.

Southeast fumbled the ball back to Armuchee a couple of plays later, but senior Seth Hilley's interception of Chandler Desanto on the subsequent possession gave the Raiders another opportunity, and this time they capitalized. Quarterback Ethan Hill kept the ball on an option play, and once he broke through the line of scrimmage, he had nothing but daylight; the senior's 29-yard scoring scamper got the home side on the board with 2:16 remaining in the first quarter.

The Indians, who also finished 2019 winless, failed to record a first down in the opening quarter, but they drove into the Southeast red zone midway through the second, only to have a 34-yard field goal attempt by Grayson Perry blocked. After forcing a punt, Sylvester Bassey went to work on the ground, putting Armuchee back into scoring position, and Desanto found Bassey on a post pattern for a 12-yard touchdown with 23 seconds left in the half.

The Raiders broke the 7-7 tie on the second half's opening possession. After Hill and bruising fullback Jose Herrera each recorded first down carries, Jordan Trevino busted a 48-yard touchdown run up the gut, although the extra point attempt by Sahid Cellis was missed.

Trevino was one of "several players who stepped up for us tonight," said Murray, who spent 16 years as an assistant with the Raiders program before ascending to the top spot. "He had that long run, and he played solid defense, too."

Both teams mounted drives in the waning minutes of the third quarter, but both ended with fumbles, sending the squads to the final quarter with Southeast clinging to a six-point advantage. The Indians (1-1) drove into Raiders territory looking to tie or move ahead midway through the final stanza, but when Desantos attempted a deep toss on a flea-flicker play, Carden was ready, and he returned the pick all the way to the Armuchee 34.

Southeast's coaches drilled that play into the team "all week, and we practiced it over and over," Carden said. "The way they lined up, I knew what was coming."

The Raiders made it a two-score game with 5:13 remaining on a Chandler Dyer 5-yard touchdown and then a successful two-point conversion. Armuchee's final hopes ended on a 4th-and-13 from their own 45, when Kameron Parker's pass attempt to Bassey was broken up along the sidelines by Dyer with 2:58 remaining, and the Raiders then ran out the clock.

Southeast looks to string together consecutive wins when they visit Gordon Lee Friday at 7:30 p.m.

"We're trying to build each week and just keep chopping," said Murray, who received the traditional Gatorade bath from his players after recording his first win Friday. "We want to get better and better every day, every week, every game."