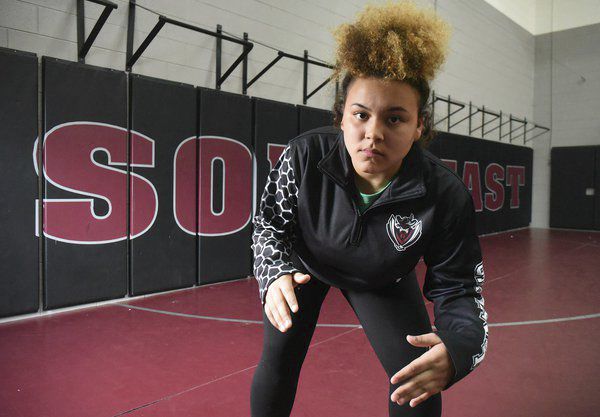 Southeast Whitfield High School wrestler Teonna Bonds hopes to be a role model for younger girls who are interested in pursuing the sport. 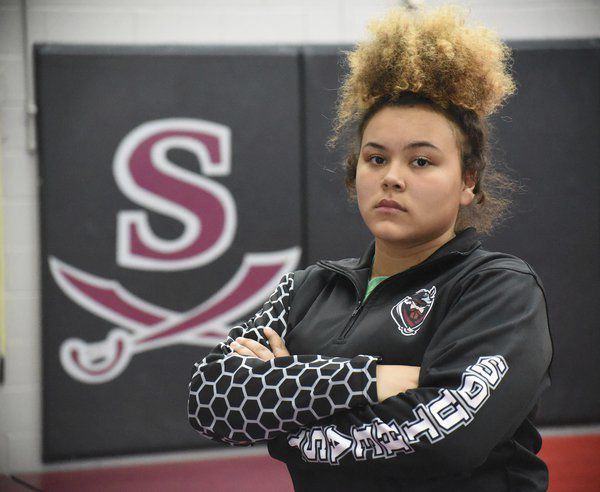 Southeast Whitfield High School wrestler Teonna Bonds hopes to be a role model for younger girls who are interested in pursuing the sport.

If her current trend continues, Teonna Bonds could be a state champion wrestler at this time next year.

Next year? She's gunning for that top spot.

"I want to win it next year," Bonds said, recounting her short career from the wrestling room at Southeast.

Girls state championship wrestling was as new to Bonds as it was to the GHSA in 2018-19. After a fellow female member of the team, Savannah Silvers, encouraged her to join, she did.

"She had done wrestling since her freshman year," Bonds said of Silvers. She talked to me about it, and I just wanted to come try it out."

Female wrestlers being found on teams was not a new occurrence prior to the girls state championships being established. Girls could join the main team, but the state association offered no female-only championship. There were 250 female wrestlers on high school teams in Georgia when the announcement was made by the GHSA that a girls tournament would be formed. Where the traditional wrestling state championships are broken up by the GHSA's school size classifications and then into several weight classes, the girls tournament consists of all school classifications. Southeast Whitfield is a 4A school, the fourth smallest out of the seven classifications.

After starting wrestling for the 2018-19 season, Bonds had a lot to learn, but did it quickly.

"My first practice was really hard, and I honestly wanted to quit," Bonds said. "I stayed with it. Once I started learning the moves it became easier and more fun."

Bonds tells of learning the different techniques used in wrestling, learning to get a mental edge over an opponent rather than just physical.

The task of learning to wrestle can be complicated, said Jimmy Bethune, one of Bonds' coaches, especially in Northwest Georgia.

"Here in our area, wrestling is really strong," Bethune said. "We have several tough teams that have won state titles."

"They've helped me a lot, and I've learned a lot over the past few years," Bonds said of Bethune and fellow coach Wade Jones.

Once Bonds got into her first season, a new challenge developed: finding opponents.

"We have a hard time sometimes matching her up, because girls wrestling is still developing here in Georgia," Bethune said. "Sometimes she had to wrestle boys. She'd do that too and never complain about it."

"It's not awkward or anything. Once you get in the moment, you don't really think about it," Bonds said of wrestling against boys. "It's hard. Some are a lot stronger."

Bonds held her own though. She has only lost three matches in her two-year career, two being in the state tournament.

"She always did well," Bethune said. "It was tough a lot of times, but she never complained. We could never ask any more out of her. She was always willing to help the team out."

That third-place finish in 2018-19 came when Bonds fell to eventual state champion KJ Haney of Hiram High School. When Bonds reached the finals in February, Haney was waiting again. That hurdle will be gone in 2021, however, as Haney is set to graduate in the spring.

Bonds already has local history made. She's the only female wrestler from any school in Whitfield or Murray County to finish in the top four at state in the competition's first two years, and she's done it twice.

"I was proud of that because it was just my first year," Bonds said. "I feel really good about myself so far. I just want to win it now."

Bonds grew up in Jasper before moving to Dalton in her sixth-grade year. When she's not wrestling or in school, she's usually hanging around with her friends, she said.

As far as her plans for the future, her two years in the wrestling ring have informed some of her goals beyond graduation.

"I want to wrestle in college," Bonds said. "I talked to one coach at state, but haven't really other than that."

Bonds said she's to have earned so much success so far in girls wrestling, and hopes younger girls around the school can get inspired to follow her path into a traditionally male-dominated sport. Now that the GHSA has an official state championship in place for female wrestlers, the sport can grow even further at Southeast and schools across Georgia. The Raider wrestling team had nine female members last season.

Bonds' quiet, do-first attitude makes her a perfect candidate as a vessel in girls wrestling as the sport continues to grow, Bethune said.

"She's most definitely a good example for younger students in the school and in the sport in general," said Bethune. "She's a good role model. She has a good work ethic. She always steps in and does her part, and I'm very proud of that. We just need more Teonnas."