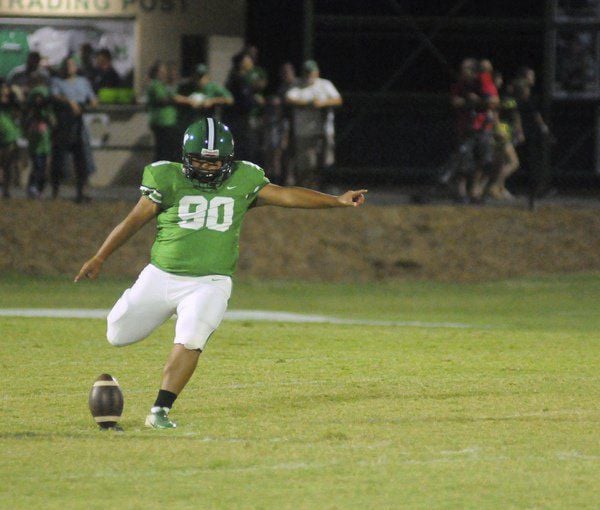 Murray County High School's Elber Romero looks down at the ball on a kickoff during his team's win over Coahulla Creek on Friday night in Chatsworth. 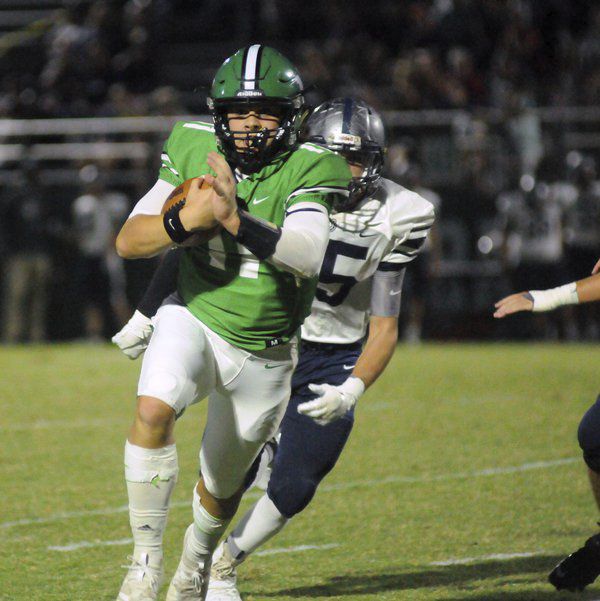 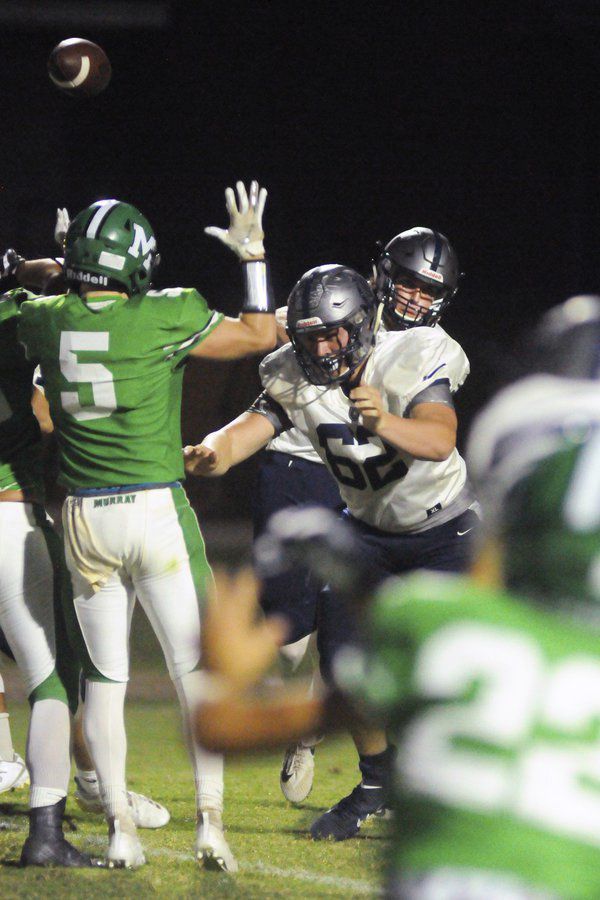 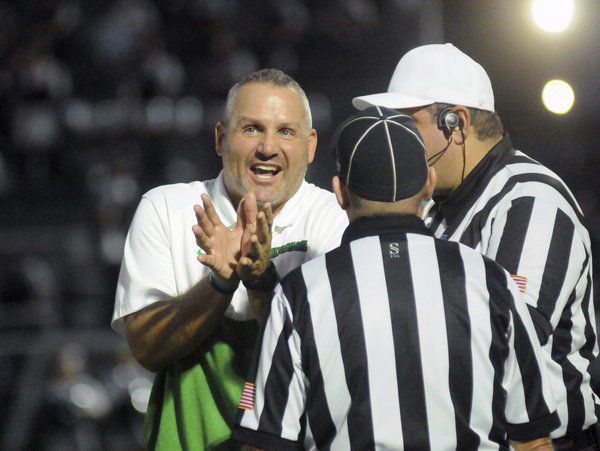 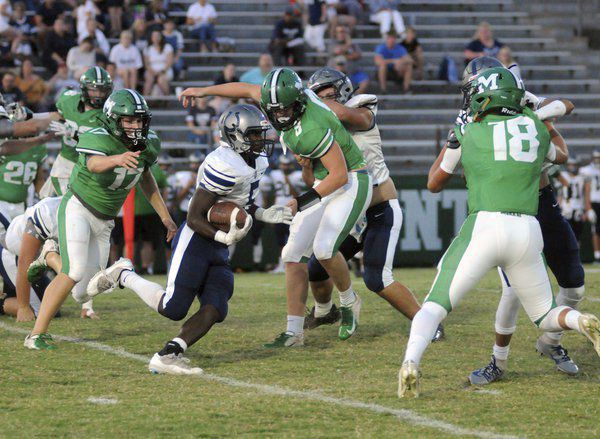 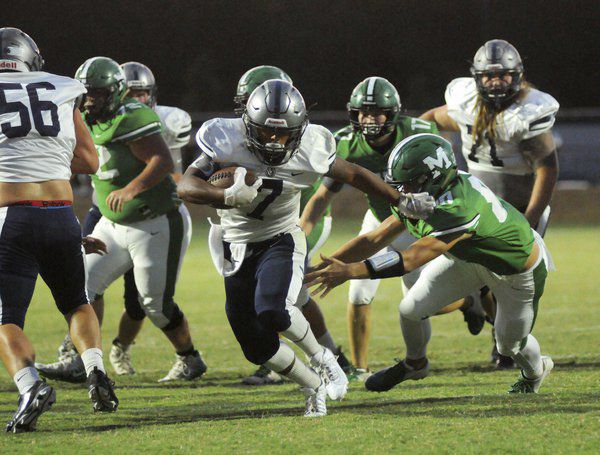 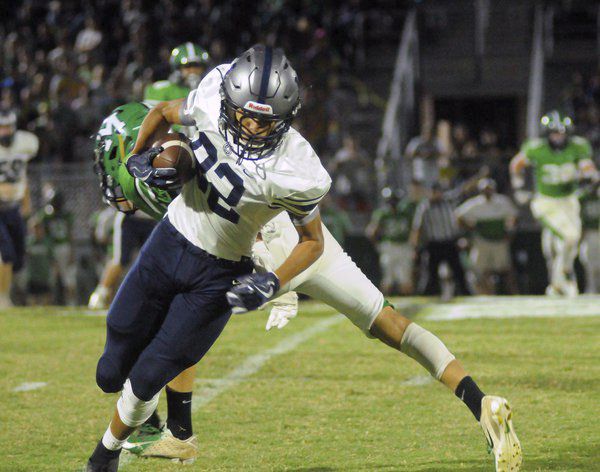 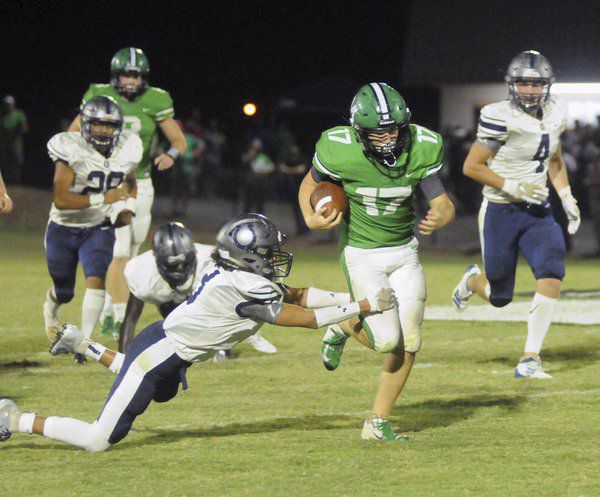 Murray County High School's Carson Voiles escapes a tackle Friday night on his way to a touchdown against Coahulla Creek in Chatsworth.

Murray County High School's Elber Romero looks down at the ball on a kickoff during his team's win over Coahulla Creek on Friday night in Chatsworth.

Murray County High School's Carson Voiles escapes a tackle Friday night on his way to a touchdown against Coahulla Creek in Chatsworth.

The Indians outscored the Colts following the block, 27-0, and junior kicker Elber Romero tied a school record with a successful 50-yard field goal in the Indians' 27-7 victory.

The blocked punt, which gave Murray County the ball at Coahulla Creek's 22 and led to a tying score was a huge turning point, Coahulla Creek coach Caleb Bagley said.

"Football is such a game of momentum," he said.

Davis Redwine blocked the punt, and Tyler Hayes recovered it for the home team. Then, junior quarterback Kaleb Jones ran into the end zone from 20 yards out, and Romero's extra point tied the game at 7 with 9:20 remaining in the second period.

In addition to all his extra points, Romero booted field goals of 30 and 50 yards Friday. The latter tied a Murray County record for longest field goal set in 2009, and he was surrounded by his teammates in the locker room after the game jumping around him and shouting his name in exaltation.

"That felt good," Romero said after that impromptu celebration. "It was a very good moment."

"He knocks them (during) practice, so whenever I have an opportunity I'm going to let him kick it," Murray County coach Chad Brewer said.

Romero spent extra time kicking after practice Thursday, making field goals from as far away as 55 yards, and his dedication is emblematic of an entire team committed to improving after last season's winless campaign.

"The effort we're playing with is going to win us a lot of games," Brewer said. "I have a lot of confidence in this team right now."

"I practice a lot. I'm dedicated to this team, and I like hanging out with this group," he said.

Defenses dominated early Friday in a game where both teams were seeking their first region win of the season, but the Colts two-headed rushing attack of Titus Underwood and Austin Hernandez took them deep inside Murray County territory late in the first quarter. Hernandez's 9-yard touchdown run gave them the lead with 1:09 left in the opening stanza. Murray County failed to move the chains even once in the first quarter, but the aforementioned blocked punt invigorated the squad, and Romero's 30-yard field goal midway through the second quarter gave them a 10-7 advantage at halftime.

"They did a really good job, and we struggled on third down," he said.

The Indians appeared to take a two-score lead on a long touchdown run by Redwine early in the second half, but a holding penalty nullified it. However, on the next play, Carson Voiles ran for a 57-yard touchdown, and the Indians claimed a 17-7 lead with 9:29 left in the third quarter.

Last year, the Colts blasted Murray County, 35-7, but Friday, the home team's defense strangled the road side's offense, and they increased the margin to 20-7 early in the fourth quarter on Romero's record-tying field goal. The Colts did drive to Murray County's 27 with 8:30 remaining, but Gage Stanley blew up Coahulla's Creek's fourth-down rush attempt in the backfield, returning possession to his team.

"We played a great defensive game," Brewer said. "We were poppin' tonight."

The Indians chewed up time and yardage on a lengthy drive before Jones plunged into the end zone with 99 seconds remaining for the final score.