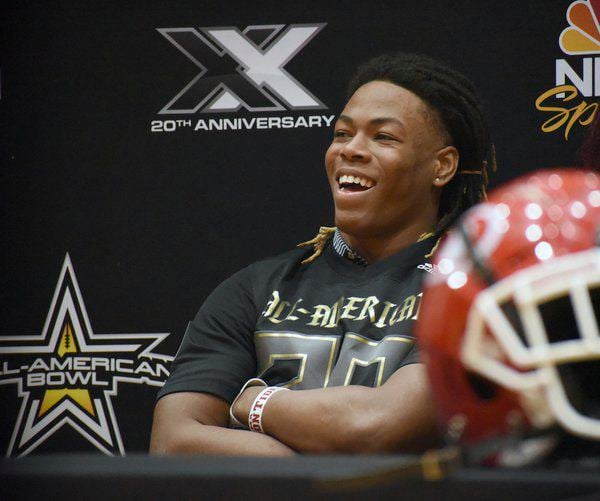 Senior running back Jahmyr Gibbs laughs during a jersey presentation ceremony for the All-American Bowl at Dalton High School. 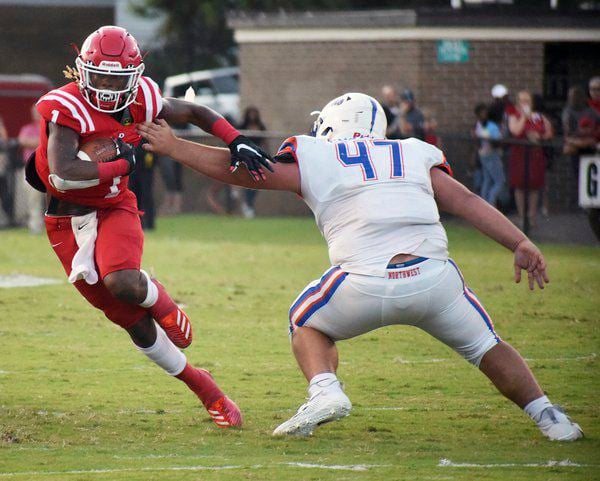 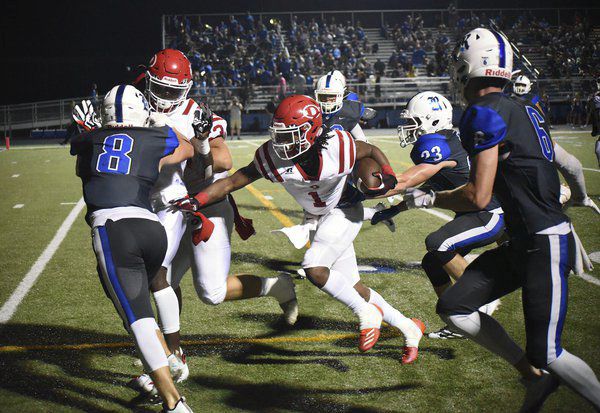 Dalton High School's Jahmyr Gibbs picks his way through the Ringgold defense during the Catamounts' first game of the season this year. 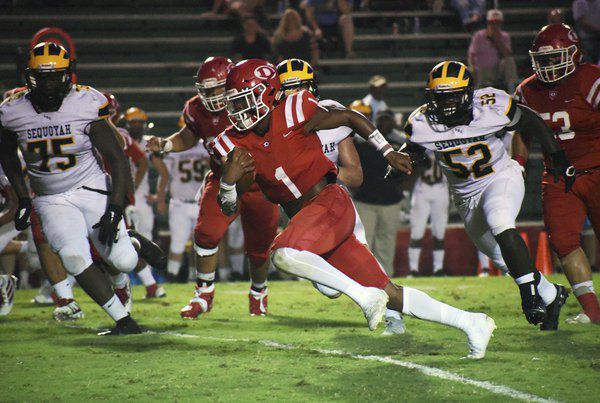 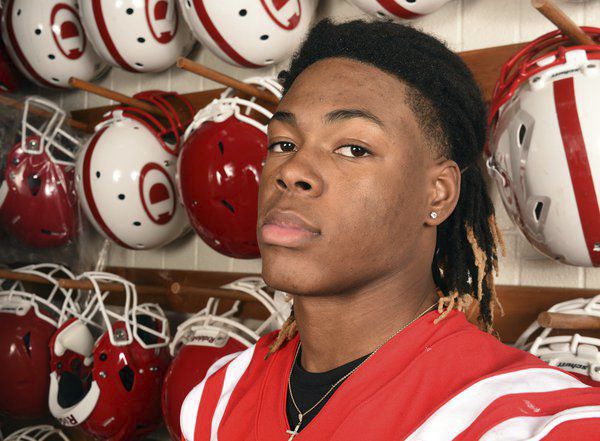 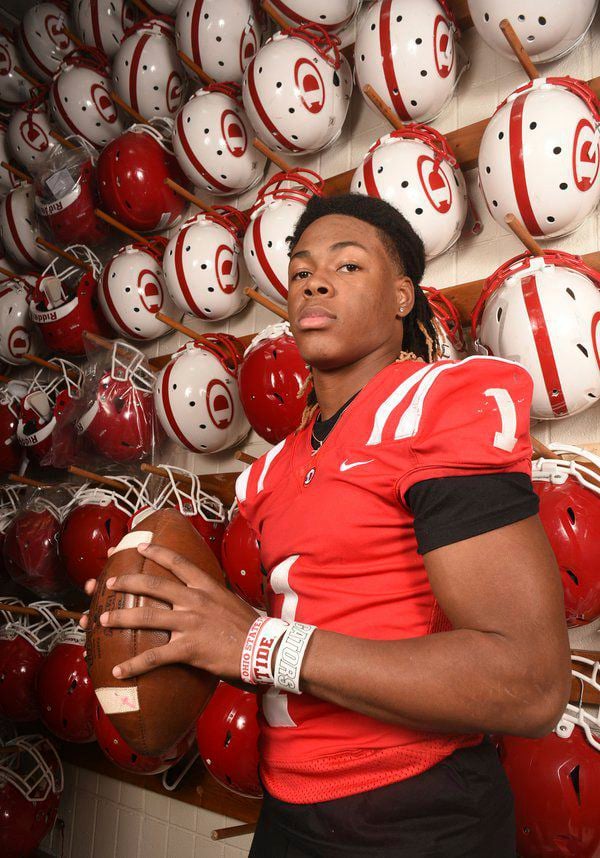 Senior running back Jahmyr Gibbs laughs during a jersey presentation ceremony for the All-American Bowl at Dalton High School.

Dalton High School's Jahmyr Gibbs picks his way through the Ringgold defense during the Catamounts' first game of the season this year.

Dalton's Jahmyr Gibbs thinks of himself as an average high school student, yet his life has hardly slowed down during the past year.

The senior running back isn't average, especially on the field. His elusive running style has earned him national recognition with scholarship offers from 29 schools, including from some of the top college football programs in the country. With his career as a Catamount officially over, he's still very much so on the minds of many recruiting experts and hopeful fans.

Gibbs has been verbally committed to Georgia Tech since this past May, but his life is quite packed for the coming month with all five of his official recruiting visits scheduled in January to Alabama, Florida, Georgia Tech, LSU and Ohio State.

Since earning the recognition as a junior, a lot has changed for the athlete who claims he just likes to hang around with friends after school. But, after finishing his senior campaign with 2,554 yards rushing, 40 touchdowns on the ground and one more score on a 97-yard kickoff return, Gibbs has earned the honor of Daily Citizen-News Football Player of the Year for the second year in a row.

While Gibbs said he thinks his life as certainly normal, his experiences this year say otherwise. He does admit to staying busy most of the time, and for starters, the attention he gets on social media is something most teenagers might only dream would happen to them.

This time last year, Gibbs said he had about 1,500 Twitter followers. Nowadays he's got more than 3,700 -- and still counting. On Instagram, Gibbs remembers having about 1,800 compared to more than 6,400 now.

"Just on Twitter, I probably get more than 500 notifications a day," Gibbs said.

His most eye-opening follow? DeeJay Dallas -- a junior running back at the University of Miami and a Georgia-native himself.

It's hard not to notice Gibbs' posts on Twitter, as he updates his scholarship count every time he gets a new one. The tweets are always straight to the point noting he's "blessed" to receive the offer. He said the posting ritual is simply to show love for the school and so that he makes people aware of just how appreciative he is. Gibbs' most recent offer came from the University of Texas just this past Thursday, receiving another on Monday from Florida State.

"Those are just the ones who thought they had a chance," Dalton football coach Matt Land said. "I had dozens of schools contacting me this season wondering if they had any shot of getting Jahmyr. I told a lot of them no."

Gibbs has garnered at least one offer from each Power 5 conference including eight from the Southeastern Conference and nine from the Atlantic Coast Conference. Gibbs is scheduled to sign with whichever school he chooses during National Signing Day in February.

So how did everything in his life happen so quickly? Land said one coach summed up Gibbs' growth perfectly.

"I think the best observation of Jahmyr came from coach (Charles) Huff, the running backs coach at Alabama," Land said. "He told Jahmyr that he was a very rare person in our world. I was hoping Jahmyr would ask about that, and he did.

"Jahmyr asked him what he meant and (Huff) told him in this world with the most nationally-branded college football teams, there's no reason he should be offering a senior. He has already been offering running backs as juniors or even younger, and the reason that Jahmyr was there talking to them proves just how special he is."

Huff described Gibbs as a developmental back and explained how most players they offer at that position were already the best on the field when they were in the eighth grade or so. He praised Gibbs for his hard work and his desire to get better.

Obviously, the Crimson Tide -- who were ranked No. 1 in the country at the time Gibbs received his offer on Oct. 19 -- were not the only ones to notice just how much Gibbs improved.

Many people who have seen Gibbs take a snap have said his most impressive quality as a player is his ability to wait on a play. Though he has the ability to drag defenders to the ground, it's not often he has to take that approach since he's typically 10 to 15 yards in front of them after he breaks free and makes players miss the tackle. It's like weaving a scarf -- elegant, yet without a stitch out of place.

The last time Gibbs said he felt like he wasn't constantly running around was at the begging of this past summer, while things really picked up for him after Dalton's first game of the season. Gibbs finished the Catamounts' 62-10 win over Ringgold with 420 yards rushing and eight touchdowns on 23 carries. After that, Gibbs said the attention hasn't stopped.

Gibbs' last game with the Catamounts came in a loss in the first round of the Class 6A playoffs to top-ranked Dacula. But every week before that, he shocked team after team -- player after player, even if the Catamounts didn't win. This included region foes Allatoona and Harrison who played for the classification's state championship this year, as the Hoyas took home the trophy.

For Gibbs, however, a four, five or six-touchdown performance doesn't often get him excited. Not many things do, but that's just how it is.

"Yes, I saw Jahmyr when he came into this program as a freshman," Land said. "I saw him when he was 6 years old, and yes he was good. But when he came here, we never treated him special and he never asked to be treated special. He shows up for every rep, he's here early just like everyone else and he considers himself common."

Putting everything aside involving his natural athletic talent, that's Gibbs' best quality as a human being, Land said.

"All great players have an heir about them. If nothing else, it's what I like to think of as confidence. Some people take it to the next level and say cockiness. Some go as far as arrogance," Land said. "Jahmyr goes the other way. The more he does, the more humble he becomes. He truly understands that he doesn't achieve what he has achieved without support, without a team and without coaching.

"He's a kid that I have never had to sit down and remind him of where he has come from. It's something I will cherish for as long as I'm in coaching."

Along with his official recruiting visits, Gibbs has also received an invite to the All-American Bowl -- an all-star game played annually in San Antonio, Texas, showcasing 100 of the nation's top high school football players. The game is on Jan. 4 and will be broadcast on NBC. Gibbs was also recently named an Sports Illustrated All-American, joining only one other running back -- Demarckus Bowman of Lakeland, Florida -- on the team.

Who knows what accolades still might be on the way for Gibbs, too, but there's one thing that will likely never change -- that humble, selfless charm.

"After we played Harrison this year, their coach came up to me to tell me that I was the best player he's ever seen," Gibbs said. "He coached (current Ohio State and former Georgia quarterback) Justin Fields, so I wasn't sure what to think of that."