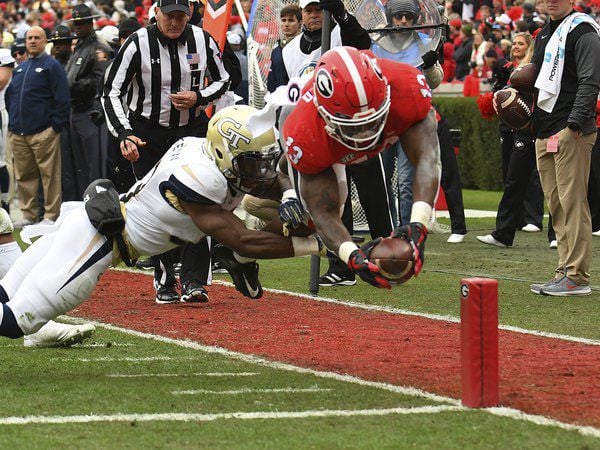 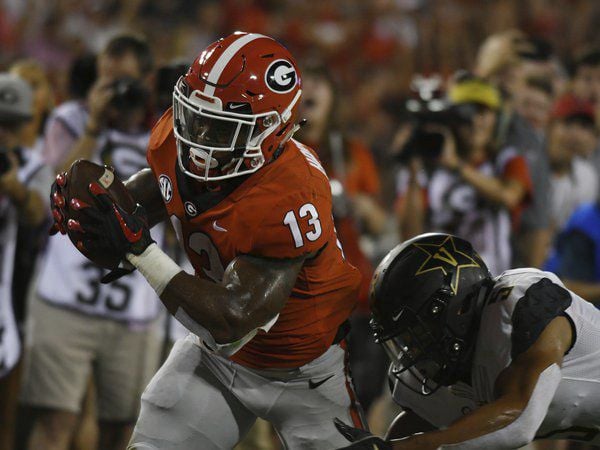 Elijah Holyfield isn’t one to shy away from hard work.

He’s shown it as he's ran for almost 1,000 yards, and he shows it every time he bounces outside the tackle box and sprints toward the corner of the end zone before diving to get the ball across the goal line.

Fans have recently taken note, but he started putting in the work long before now.

When Holyfield was at Woodward Academy, his head coach John Hunt remembered a time against Lovett when he needed to make some kind of change, as his War Eagles were looking helpless. Hunt’s quarterbacks weren’t performing as well as he thought they should, and the Lions were running away with the game.

He kept calling the play, and Holyfield kept running.

Hunt was taken aback, and he turned his attention back toward the field. Holyfield kept popping back up after each run, tossing the ball to the referee and then rejoining the offense in the huddle. Hunt didn’t notice the onslaught of runs, but that’s because Holyfield never made it noticeable.

“During this entire time, not once did he tap his helmet,” Hunt said. “Not once did he want to come out, and not once did he run any less hard than he did on the first run. That was amazing to me. Most players will tap out, but not him. He just wanted the ball again. He’s just built that way.”

Through 13 games in 2018, he has rushed for 956 yards and seven touchdowns as he split carries with sophomore D’Andre Swift. He had two 100-yard rushing games, including one in Georgia’s win against Kentucky that clinched the SEC East for the Bulldogs.

Whatever the moment demanded of him, Holyfield provided. He consistently gave the Bulldogs the production they needed as they marched out to an 11-2 record and a chance to end the season with a Sugar Bowl victory. While the spotlight has shone on him a little brighter this season, the way the running back has handled it hasn’t been surprising to those who know him best.

They know how much effort he puts in during the other six days of the week, so they’ve come to expect success on Saturdays.

“I mean he, to this date, is probably in the top 1 percent in work ethic of any football player I was ever associated with,” Hunt said. “He was just dedicated, committed, hard-working and coachable. All the things that you ask for as a coach, he was.”

Holyfield’s recent resurgence is largely due to the departure of the household names that came before him in running backs Nick Chubb and Sony Michel.

The two current NFL running backs dominated the Bulldogs’ carries in 2016 and 2017, forcing Holyfield to make the most of his few touches a game. Like many players heading to top programs, the former Woodward Academy star was used to being the feature back in high school. Coming to Georgia meant moving to the back of the line.

It was a role he expected, and one that he embraced.

“I think now that he’s doing so well and D’Andre’s playing so well, it goes back to the days of the past with Sony and Chubb,” said Ryan Davis, an assistant coach at Woodward. “If that’s the product that’s being put out on the field, and that’s what’s going to make them have success, (Holyfield is) going to be all on board with that. That’s not a question there.”

While rushing production has diminished slightly since Chubb and Michel left, the current duo of Holyfield and Swift have accounted for 1,993 rushing yards and 17 rushing touchdowns for the Bulldogs in 2018. The fact that they split carries means that each has sacrificed production, but they have also ensured that each will be at their best when they step onto the field.

“We’re always fresh,” Swift said. “It don’t matter who starts the series and who comes in, our one-two punch is one of the best in the country.”

Holyfield and Swift will be the first to note the differences in their running styles, as Swift is more elusive while Holyfield will power through defenses when given the chance. That’s what makes the one-two punch so effective, though. As soon as one of them wears down an opposing defense one way, the other back can come in and attack other areas.

The two-pronged attack is effective against other teams, but it is also effective intrinsically. Holyfield says he works his hardest because he has to keep up with Swift.

“When you have somebody there that is just as good as you, playing right next to you, it pushes you every single day,” Holyfield said. “I know I can't take a day off because he isn't going to take a day off. I think it motivates us."

Aside from the history of good running backs and the opportunity to gain national attention, Holyfield had another reason for choosing Georgia in 2016.

As a native of College Park, the running back took the opportunity to leave home without having to fully leave home. Athens could be his, but it wasn’t too far for his family to make the trip on any given Saturday.

“His grandmother’s been to like every football game,” Davis said. “And we were like ‘If you go to a school up north or out west, that’s not conducive to where your family can make it.’ That’s a major factor for him … That’s one thing that he always wanted to see.”

Along with his grandmother, Holyfield’s dad, Evander, will often make the trip up to Athens to see his son. The former heavyweight champion boxer used to slip in unnoticed (or, as unnoticed as possible) to his son’s high school games, and has continued that tradition at Georgia.

Hunt explained that the boxing champion had a strong influence on Elijah Holyfield’s work ethic, but the older Holyfield also wanted the spotlight to remain on the football field. Elijah Holyfield’ is the one putting in the work now, and even though he came to Georgia so he could be close to his family, he also came to Georgia because it provided an opportunity for success.

“He always is proud of his father. His father is one of the greatest boxers in all-time history, so that’s always been a proud moment for him,” Davis said. “One thing I know Elijah always wants to do is he wants to make a name for himself. He didn’t want to be known as Evander Holyfield’s son, he wants to be known as Elijah Holyfield.”

Holyfield was a team captain for the Bulldogs in several games this season, but it wasn’t because of some recent change in attitude. Instead, the honor was repeatedly given for the culmination of hard work over the span of three years.

“He’s always been mature,” Georgia head coach Kirby Smart said. “He’s a very mature kid who worked his tail off when nobody knew him because of the feature backs we had. We all knew what a workhorse he was.”

The difference with this year is that he’s now able to transition into more of a leadership role for the younger running backs looking up to him, like freshmen James Cook and Zamir White. In high school, his leadership by example is what prompted team-wide improvement.

“He made everyone believe they could do it,” Davis said. “One thing I know is similar to what he’s probably doing up there in Georgia is he made things work out because he was doing it. He led by example. You never really had to tell him to do things; he just did it. If it was time to work out, he’d work out. If it was time to run, he’d run.”

For Holyfield, it all comes down to the idea of working hard now so that he can reap the benefits later. It’s a simple idea, and one that isn’t uncommon throughout the college football landscape. What is unique is the extent to which Holyfield executes the work.

“I do put in a lot of work, and I think it starts to pay off,” Holyfield said. “Toward the end of the season, I feel like when other people start to die down, we keep going because of our work ethic. I just look forward to the next game and the game after that.”