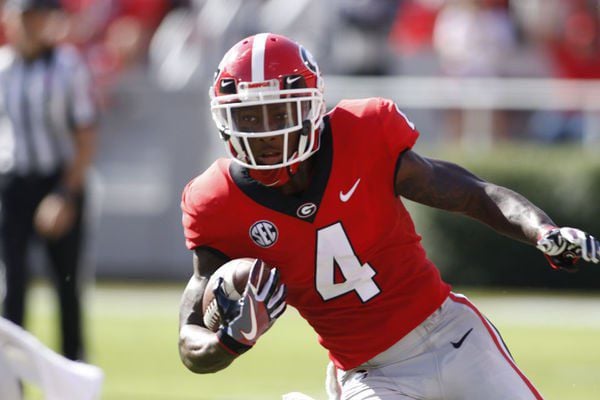 Mecole Hardman, a junior wide receiver from Bowman, turns and rushes the ball against Tennessee on Sept. 29. 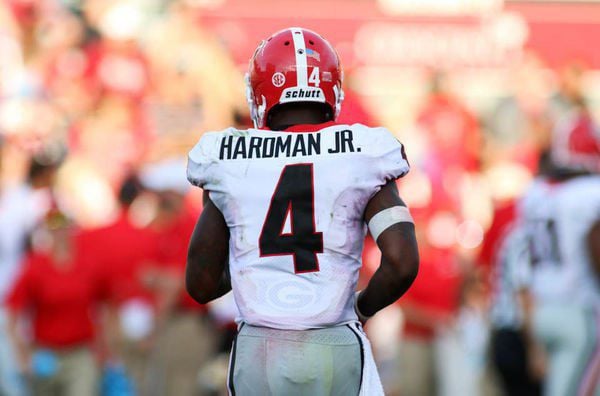 Georgia wide receiver Mecole Hardman walks on the field during a game against the University of South Carolina at Williams-Brice Stadium on Sept. 8.

Mecole Hardman, a junior wide receiver from Bowman, turns and rushes the ball against Tennessee on Sept. 29.

Georgia wide receiver Mecole Hardman walks on the field during a game against the University of South Carolina at Williams-Brice Stadium on Sept. 8.

There are many words that carry weight in Elbert County.

There is granite, the industry that has earned Elberton the moniker of “Granite Capital of the World.” There’s also football, a passion that results in fans packing the Granite Bowl on Friday nights in the fall to see the Elbert County High School Blue Devils play.

But there’s a last name that stands above all others when it comes to Elbert County football, seven letters that carry the weight of a thousand granite blocks: Hardman.

For years, the legacy lay dormant after the graduations of Mecole and Kendrell Hardman. But now, there is a third Hardman who is carrying on the tradition and expanding it across the country: Georgia receiver Mecole Hardman Jr.

But the story doesn’t begin with Hardman Jr.’s arrival on the Georgia campus in 2016. Its roots can be traced back 30 years to his father with the same name.

‘You’re not on our level yet’

The first question for the elder Hardman is obvious: Where does a name like Mecole come from?

The name, he says, is actually a nickname given to him by his mother and grandmother. The legal name of Hardman senior and junior is Carey Mecole Hardman.

In 1989, Hardman Sr. arrived on the Elbert County High School varsity football team. Once on the team, he wasted no time in establishing a reputation.

He described himself as more of a power back that looked to run over opponents. He set numerous records at Elbert County and earned an honorable mention slot on the Atlanta Journal-Constitution’s All-State team in 1990 and 1991.

Madison County High School head coach Chris Smith played against Hardman Sr. during high school. He remembers the elder Hardman as a powerful athlete who was “fast enough to outrun people, but most of the time he’d just drop his pads on you and run through you.”

In 1992, the Blue Devils and the Madison County Red Raiders faced off with first place in the region on the line. Smith said his defense held Hardman in check for about a quarter, with the explosive back being on the receiving end of one particularly hard hit.

“He hopped up said, ‘That’s OK, I got you, I got you,’” Smith said. “About the next five runs, he just ripped off some insane runs where he ran over, around and through everybody on our defense. It was pretty amazing to watch.”

After Hardman Sr. graduated in 1992, Kendrell continued the family legacy. As good as his older brother was, Kendrell might have been even better.

He said his brother was his constant motivator, telling him, “you’re going to be better than me.” Kendrell said he learned the ropes of football from both watching his older brother play and having conversations with him.

Playing both offense and defense, Kendrell made All-State each of his last three years in high school. Kendrell’s speedy style of play also earned him a nickname. While his brother had the name “The Tank,” Kendrell received the moniker “New Shoes” Hardman after he had problems with his shoes from cutting so quickly.

While Hardman Sr. mentored his little brother, he didn’t have a son of his own quite yet. Then, on March 12, 1998, that changed when Hardman Jr. was born.

Hardman Sr. said he instilled a love of football in his son from an early age because he recognized it was a route for his son to potentially get a free education one day. But while some parents insist their children are the best, the Hardmans took a different approach.

As Hardman Jr. grew up, his father said he believes the thought of becoming as good as his family members drove him to succeed. Sometimes it drove him a bit too much: Hardman Sr. said his son used to cry when he was hit hard or things didn’t go his way.

But like his dad’s resilient run against Madison County in 1992, it was Hardman Jr.’s ability to bounce back up after a big hit in an 11- and 12-year-old all-star game that convinced his dad he was ready to go to the next level.

There’s no hiding in Elbert County when your last name is Hardman.

From seventh grade on, Hardman Jr. was “the man,” as his dad put it. Everyone knew who he was and couldn’t wait to see him on the field for the Blue Devils. When people saw the last name, they knew a special player was on the way.

Former Elbert County head coach Sid Fritts said he couldn’t wait to get the latest Hardman on his team. He utilized Hardman Jr. as a zone-read quarterback, similar to the Wildcat quarterback role he’s played at Georgia.

“His vision is so good,” Fritts said. “He’ll see things that most people don’t see.”

Hardman Jr. spent his life hearing how he wasn’t as good as his father and uncle. Whether it was football or playing "Madden", they kept him humble by not letting him win anything.

But when he got to high school, it was Hardman Jr.’s time to shine.

He earned All-State honors his final three years in high school and earned a spot on the Atlanta Journal-Constitution’s Super 11 team in 2015, his senior season. All the while, he had his dad to look to for guidance.

“He’s the one that kept me on a straight path and setting the expectations that I couldn’t set for myself and just getting my mind right, the mental state,” Hardman Jr. said.

From the beginning of his high school career, Hardman Jr. generated plenty of Division I recruiting interest. However, unlike in Elbert County, the Hardman name wasn’t a household name across the country. Hardman Sr. recalled an instance at a Florida State camp where his son introduced himself to former Seminole coach Jimbo Fisher, who had no idea who he was.

“That killed him. So when he came back, he said, ‘From this day forward, every camp I go to, they’re going to know who I am,’” Hardman Sr. said. “In those camps, you have lines so long of people waiting their turn or whatever. He never waited, he would just break line.”

Hardman Sr. went to Savannah State on a football scholarship, but he said he “wasn’t focused” on football in Savannah, and he joined the Navy.

But Hardman Sr. and Danyell wanted more than that for their son. They both stressed the importance of grades to Hardman Jr., who graduated in 2016 with honors. As for football, Hardman Jr.’s confidence didn’t waver.

“He always talked about playing big boy ball, going to the NFL,” Hardman Sr. said. “He was like, ‘I’m bigger than that. I’m not going to Savannah State.’”

Hardman Jr. committed to Georgia, but it wasn’t an easy transition despite being only about 45 minutes from home. The Bulldogs played Hardman Jr. on defense for his first year, which Hardman Sr. said his son “was real down on.” The younger Hardman considered a transfer, but his dad convinced him to stick it out.

In spring 2017, Hardman Jr. moved to receiver. He took immediately to the move, and he went from telling his dad practice went “all right” to saying “Great practice, I loved practice.”

Now at the position he wanted to play all along, Hardman Jr. focused on a new goal: making everyone in college football know the Hardman name.

The Hardmans come to Athens

It’s hard to miss the Hardman family in Sanford Stadium.

Danyell Hardman said her husband always wears a shirt with “Hardman Jr.” written across the back, and she does most of the time as well. Surrounding fans always ask if the No. 4 on the field is their son.

All they need to do to find the answer is look at Hardman Sr.’s face.

“My wife always says I’m living my dream through him, but that’s OK because he’s mine,” Hardman Sr. said. “It’s just like me looking at myself as a younger guy because he looks just like me and just his personality, his character. All that, when I see him, I’m like, ‘Dude, that’s me.’”

That’s mostly where Hardman Sr. sees his son now, on the green grass of Sanford Stadium bearing the family name on the back of his jersey.

However, he said Hardman Jr. still comes home every chance he gets to go night fishing. It’s not just family Hardman Jr. sees when he returns home. Elbert County High School assistant principal Brian Turner said every time Hardman Jr. is in town, he makes it a point to stop by the school and socialize with the students.

When he went to Elbert County’s game against Monticello on Oct. 19, the hometown hero felt the love.

“I never saw him because we’re down on the field during the game,” Turner said. “It was because he was up at the top of the Granite Bowl where we play at with all the kids. He was just surrounded all night.”

Everyone knows the Hardmans in Elbert County. But for Hardman Jr., that’s not enough. He wants to spread the name far and wide, stretching from Bowman to all reaches of the college football universe.

“(I) definitely just want to make that last name look good because that’s a brand,” Hardman Jr. said. “Just got to keep continuing to represent it the right way.”

Over the past two seasons, Hardman Jr. has done a good job of doing just that. He’s hauled in 56 passes for 893 yards and nine touchdowns between 2017 and 2018, including an 80-yard touchdown against Alabama in the national championship last season.

And while he wants the best for his football career, his uncle believes family is always in Hardman Jr.’s mind too.

“Even though he’s doing it for himself, ‘I’m doing this for y’all because I want to show my appreciation to y’all, what y’all have done for me,’” Kendrell Hardman said.

Kendrell said when people thought of the Hardmans before, it was as individuals, as Kendrell and Mecole Sr. But now, with what Hardman Jr. has done, it’s transformed into “Them Hardmans, boy, they’re some awesome players.”

Hardman Sr. agrees, saying his son has taken the family name to “another level.” By playing on national television every Saturday, Hardman Jr. has extended the Hardman name beyond the borders of Elbert County.

That’s where those seven letters have resided for 30 years, nestled among the granite. Through the efforts of Hardman Jr., that’s changing.

“He wants people to know that name, you know what I’m saying?” Hardman Sr. said. “Not only for football, just because, ‘I’ve got a great family, my family’s awesome, y’all need to meet us.’ That’s how he carries himself. I think he’s doing a good job with it right now.”