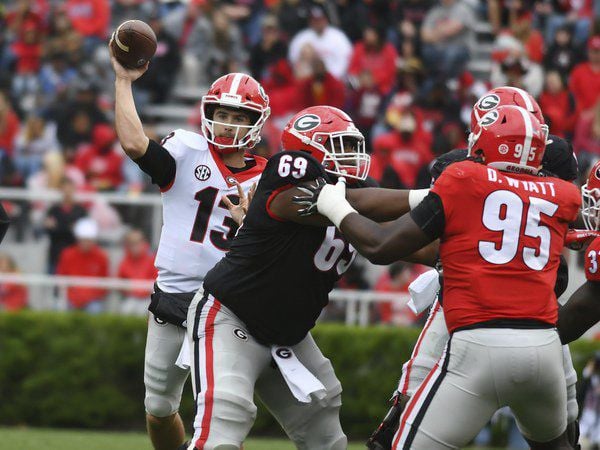 Georgia Bulldogs quarterback Stetson Bennett throws a pass during the team's spring game last month at Sanford Stadium. After a year away at a junior college, Bennett returned to Athens and is battling to be Jake Fromm's backup. 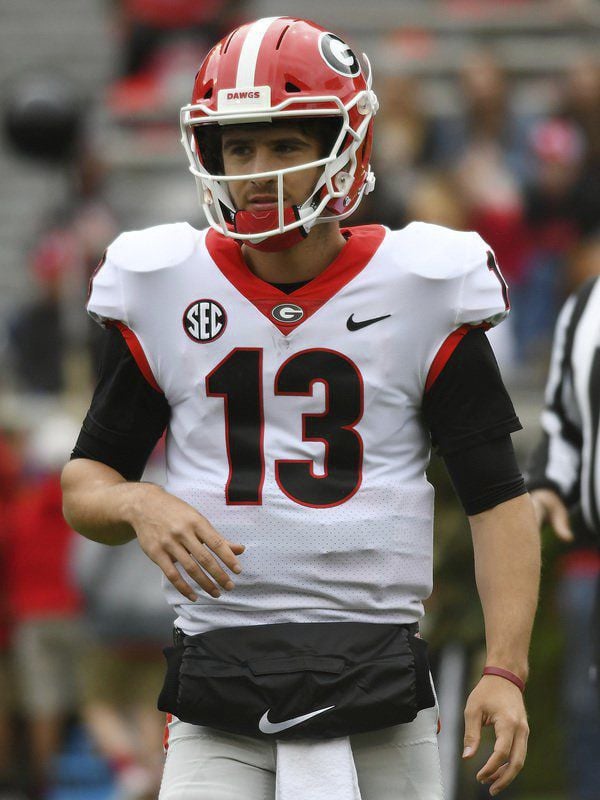 Georgia Bulldogs quarterback Stetson Bennett is showns during the team's spring game on April 20 in Athens.

Georgia Bulldogs quarterback Stetson Bennett throws a pass during the team's spring game last month at Sanford Stadium. After a year away at a junior college, Bennett returned to Athens and is battling to be Jake Fromm's backup.

Georgia Bulldogs quarterback Stetson Bennett is showns during the team's spring game on April 20 in Athens.

Stetson Bennett realized what he left behind in Athens the moment he pulled on to campus at Jones County Junior College in Ellisville, Mississippi.

Also, a typical Bobcats football practice ran for about an hour, and team meetings lasted 30 minutes. His new playbook was smaller, so there wasn’t a lot to work with.

“(Junior college) is not as nice as this,” Bennett said. “Great people, great coaches, great football, but it’s not the same.”

Bennett first walked on at quarterback for Georgia in 2017. He commanded the scout-team offense for one season throughout the Bulldogs’ run to the 2018 national championship game and garnished praise from members of the first-team defense.

“Stetson has always been special,” said offensive lineman Isaiah Wilson, who played alongside Bennett on the scout team in 2017. “He’ll throw, run. He can do it all really.”

Despite the rave reviews, Bennett wanted snaps on the field, and he doubted if he’d get playing time at Georgia. He knew he would remain behind Jake Fromm, Georgia’s scholarship quarterback from Bennett’s class who led the offense with 2,615 passing yards and 24 touchdowns in his freshman year.

The situation was completely different when Bennett transferred to Jones, where he said he “ran the team” and gained the on-field experience he’d always wanted. Bennett led the Bobcats to a 10-2 record in 2018 while passing for 1,840 yards and 16 touchdowns.

“Being away made me realize how lucky I was and that I deserved nothing,” Bennett said. “Nothing was going to be handed to me, so I have to work to be a better person and better at football.”

But after a single season at the junior college level, Bennett sought out another opportunity in Division I.

His second stint with the Bulldogs began on the first morning of this season’s early signing period when he woke up to missed calls from head coach Kirby Smart and offensive coordinator James Coley.

“I was like ‘Geez, what is happening,’” Bennett said. “It kind of scared me a little bit.”

Bennett didn’t say yes immediately. He talked with his parents and coaches and weighed other options, such as a prior verbal commitment to play for Louisiana.

Ultimately, Bennett accepted Smart and Coley’s scholarship offer to return where he had previously walked on just two seasons prior.

“I would’ve been fine going to Louisiana, pride-wise,” Bennett said. “It wasn’t an itch I had to scratch to come back here. I just love this place.”

According to Smart, Bennett competed with four-star quarterback D’Wan Mathis from the 2019 signing class for the primary backup spot behind Fromm, and Bennett and Mathis received the same amount of snaps.

But Bennett’s teammates are still impressed with the returning quarterback, just as they were before he left for Jones.

“Stetson is a once-in-a-lifetime quarterback,” defensive back Eric Stokes said. “I love that he’s here with us.”